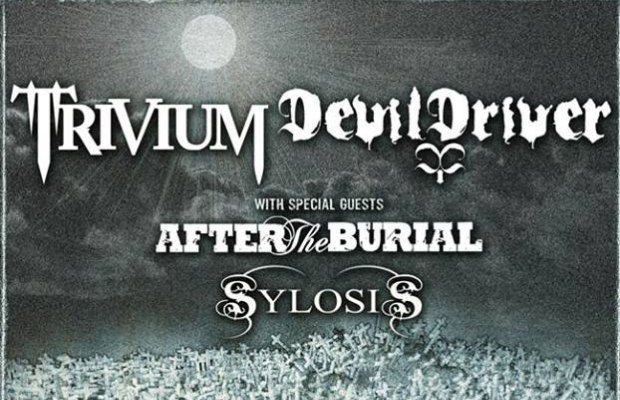 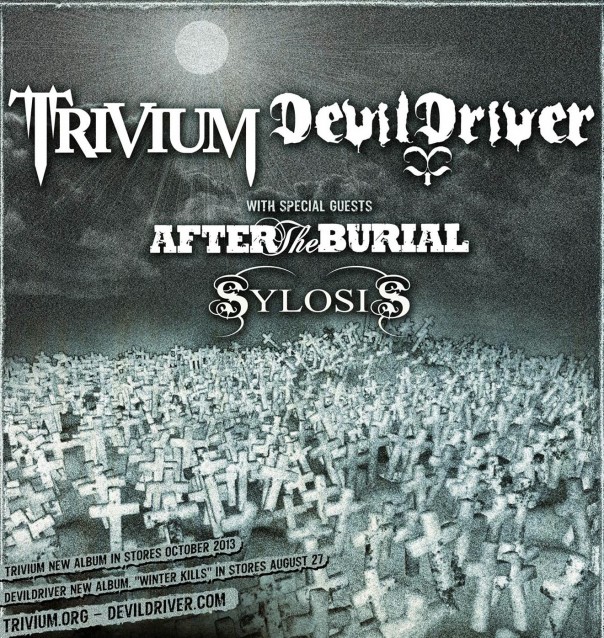 In support of their new release Winter Kills California Groove Metallers, DEVILDRIVER will be hitting the road this fall on a co-headlining tour with Trivium. Trivium will also be on the road in support of their new release, details on which will be announced soon. Support on the tour will come from After the Burial and Sylosis. Everything kicks off in Boise, ID on September 12th and rolls through October 17th in San Diego, CA

Frontman Dez Fafara cannot wait to be back on the road in North America:

“It’s been almost a year since DEVILDRIVER have toured the US. I am Stoked to finally be getting the chance to go back out and hit the road with “The Groove Machine”!

This tour will be a mixture of DEVILDRIVER favorites and a bunch of new stuff off of our new record Winter Kills. I cannot wait for the record to come out and to get back to what we do best, play live. Touring with our friends in Trivium, After the Burial and Sylosis is just the fucking bonus!

Come on out for a great night of metal, get ready to get down and dirty, see you in the pit!”

DEVILDRIVER will be releasing their sixth studio album Winter Kills August 27th via Napalm Records. Winter Kills is available in four configurations including a Deluxe Digibook with CD (including two bonus tracks: “Shudder” and “Back Down to the Grave”) and Live DVD (Featuring 45 minutes of live raw DEVILDRIVER power. No studio over dubs at all just the band at their best and includes fan favorites “Clouds over California” and “The Wretched”), standard CD version, digital version and for the first time in DEVILDRIVER history, and a 2LP Gatefold edition.

The band recorded the album in Florida at Audio Hammer Studios and vocals in Los Angeles, CA at Dez’s home studio with Mark Lewis (Black Dahlia Murder, Whitechapel, All That Remains) handling production duties. DEVILDRIVER has worked with Lewis previously on “Beast” and “The Last Kind Words” and producer Mark Lewis’s prolific leadership of the new school of metal has yet again helped DEVILDRIVER deliver another Epic heavy Metal record. This record melds what the band does best. In your face power as well as the California Groove sound the band pioneered.

DEVILDRIVER has always been a band on a three-pronged mission: Work hard, rock harder, and kick as many asses as possible in the process. The band tours forever and has since its beginnings. Their live performances and circle pits are as legendary as their music.

DevilDriver with Trivium, After the Burial and Sylosis: