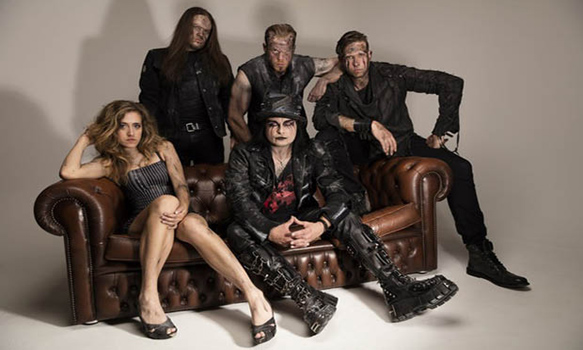 There are many well known musical artisans in established successful bands who are also involved in other projects. Perhaps slightly less known, yet, not all should fall under the infamous label of a side project. This is because the work involved is more than likely just as important to the creator as their full-time gigs. Case in point, in the Heavy Metal world, creators include such artists as Municipal Waste’s Tony Foresta, Judas Priest’s Rob Halford, and now Cradle of Filth’s Dani Filth. While Dani Filth actually came on board as the second main singer into Gothic Horror creation Devilment, he clearly has made it his own and does not seem to be aiming towards sitting quietly in the dark anytime soon.

In a short period, Devilment has released two albums, 2014’s The Great And Secret Show and, as of November 18, 2016, II -The Mephisto Waltzes via Nuclear Blast. A new tale in their sage, it features the female vocals of Lauren Francis much more than the first album, while also bringing in a more classy Gothic overtone to the mix; both ethereal and mythical in nature. The current line up consists, of course, with the brilliantly executed lead vocals of Dani Filth, the classic and honest riffs of Colin Parks on lead guitar, with the crucifying bass tones of Nick Johnson, the mysterious keyboard melodies and vocals of Lauren Francis, and, rounding out the team, the creative timely beats of Matt Alston on drums.

II-The Mephisto Waltzes possesses many characteristics found in some early ’90s albums from bands such as Marilyn Manson as well as Coal Chamber. It also seems to pick from that classic British guitar sound with a drop of old school Black Metal thrown in, topping it off with a heavy dose of cleanly harmonized ethereal feminine vocals and classical piano style keyboards. Possessing nine tracks in total, there is plenty of variety within the tunes to go around while still maintaining a solid body of work that aims more at craft than theme or concept, and this works very well as a whole.

Favorites that stand out above the rest for catchy, classy, and uniquely structured in style are “Hitchcock Blonde,” “Under The Thunder,” and “Full Dark, No Stars.” The latter of the three mentioned is an extremely top-notch piece over six minutes in length. Featuring dynamic vocal switch-ups between male guttural with female soprano, it comes along with the calm versus storm rhythms and tones happening with the guitar and keyboards. Quite interesting, it creates a scenario similar to an Edgar Allen Poe dinner party or ball where the crowd is dressed in their finest attire while danger lurks around every corner.

“Hitchcock Blond”‘ is perhaps the most mainstream friendly and ballad typical. This is even though nothing of a Gothic nature should ever be classified as mainstream. That said, it has classic Gothic elements and the most popular keyboard tones, yet the simplicity of it in comparison to other tracks gives it a strength to hold its own in a catchy way. It would serve itself well to a Goth club dance floor and also could work as part of a classic Horror soundtrack. The aforementioned “Under The Thunder” is perhaps the most Black Metal vibed of the three favorites. Although it really lends itself to other areas to the point that any Black Metal becomes background to the rest of the darkness until about halfway in where Dani’s lyrics with the riffage work perfectly hand in hand together for a brief section of that old school style.

Moving on, “Shine On Sophie Moone” is faster and slightly more in the realm of Cradle Of Filth, yet it must not be compared to such as Devilment is of an entirely different entity, and should be treated as such. Three-quarters of the way through the composition is a deep and dark Dani Filth sermon describing a Horror love story perhaps. This is before oddly branching into a wild guitar solo, and while it may feel out of nowhere, it tackles the current agenda with valiant effort. Then there becomes nothing left to do except dive into the longest title for a track of the album, one called “Life Is What You Keep From The Reaper.” A mouthful, it completely exemplifies the highly experienced and talented vocal range of both Dani and Lauren as they finally harmonize off each other in a expeditionary way.

Hearts race, pitches rise, guitars wail, and the execution breathes dark life into the listener. On to “Dea Della Morte,” it boils down to a flowingly Gothic title for a fairly average song that delves into very conventional guitar riffs and barren style where the only out-of-the-box excitement is in the quality of the female vocals. Concluding the story, “Hell At My Back” is another catchy tune that exemplifies Dani’s unique vocal range in all its glory while the quality and understanding coming out of the drumming unifies everything, making any out of place guitar riffs fade quietly to the background.

On a whole, II – The Mephisto Waltzes is a modern mix of old styles executed for the most part in a unifying yet complex way. Dani Filth and Lauren Francis are intricate parts to each song, taking the music to the next level. As mentioned, the tracks really excel above the ordinary when the style is mixed; jumping from clean to dirty, to fast to slow, and vice versa in an extreme yet classic Gothic way. Keeping the talent and passion in the spotlight, CrypticRock gives Devilment’s II- The Mephisto Waltzes 4 out of 5 stars. 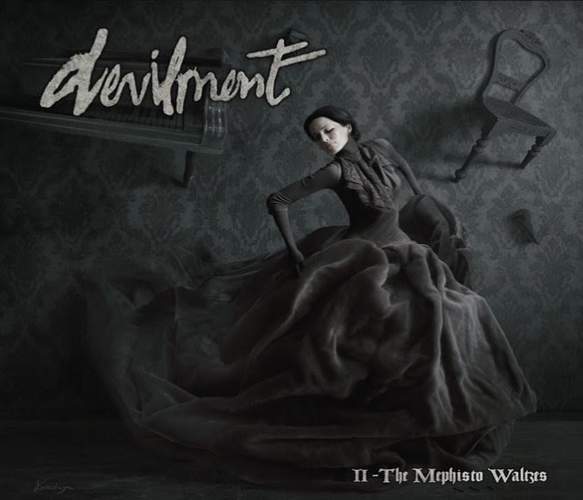