“Art should comfort the disturbed and disturb the comfortable,” as stated by Mexican Poet and Author Cesar Cruz. This sentiment should resonate deeply with viewers of the film The Devil’s Candy, as well as for anyone that has ever created art, utilizing any form of artistic medium, which was born from a place of torment and pain. This rather remarkable Supernatural Horror explored this theory, as well as the effects of an artist’s obsession to finish a painting unknowingly inspired by dark forces and events. 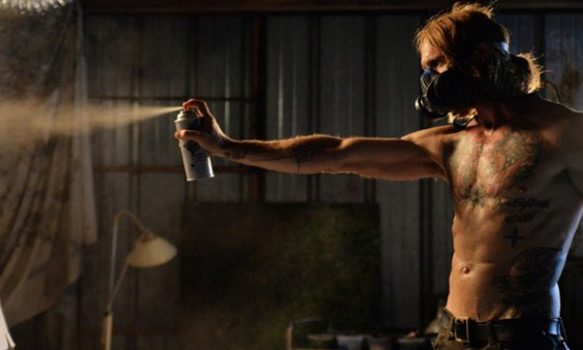 Premiering Friday, September 13, 2015 at the Toronto Film Festival in Canada and September 27, 2015 at Fantastic Fest in the US, in addition to a plethora of releases throughout Australia and Europe between 2015 and 2017; IFC Midnight has picked up this movie to release via DVD/VOD, and in a limited number of theaters throughout the US on March 17, 2017. Written and directed by up-and-coming Aussie Director Sean Byrne, whose award-winning feature film The Loved Ones was overall widely received by the Horror community, now The Devil’s Candy is set to make a similar impact.

Featuring an impeccable cast including Ethan Embry (Eagle Eye 2008, Can’t Hardly Wait 1998) as the struggling artist, Jesse Hellman; Shiri Appleby (Swimfan 2002, UnREAL TV series 2015-2017) as his beautiful wife, Astrid Hellman; Kiara Glasco (Maps to the Stars 2014, I’ll Follow You Down 2013) as their rocker daughter, Zooey Hellman; and Pruitt Taylor Vince (Constantine 2005, The Legend of 1900 1998) as the tortured “candy” collector, Ray Smile, incited by a malevolent power; among others that come together and successfully embody the characters they were chosen to portray.

It all begins with Ray (Vince) lying in bed as disembodied voices overwhelm and rattle his brain. In his state of severe unrest, he gets up, grabs his cherry red Gibson Flying V guitar, turns his amp all the way up, and shreds a solo for no audience other than the crucifix that hangs just above his bed. His mother enters the room, and spouts threats about sending him back to the hospital once his father returns to the house. In a fit of anger, and fearing his return to the mental institution, Ray attacks his mother and ensures his father suffers a similar fate upon his arrival home.

Jump forward to Artist Jesse Hellman (Embry), regretfully working on a piece of commissioned art when he is interrupted by his daughter, Zooey (Glasco), and teased for painting butterflies, which “aren’t very Metal.” Jesse is the typical struggling artist who must sometimes put on hold his artistic brilliance to create inexpressive works that will actually sell and bring in money to help take care of his family. Despite what he may be working on, Jesse finds it hard to manage his time properly whenever he is slapping paint to the canvas. Finally, his wife, Astrid (Appleby), rushes him along, reminding him that they have an appointment with the realtor.

The Heavy Metal loving Hellmann’s make a journey to rural Texas to check out their dream home that, like in most Supernatural Horrors of this nature, is so reasonably priced that it comes off as too good to be true. The realtor is dishonest when disclosing the deaths that occurred in the house, romanticizing the murders of Ray’s parents and claiming them to be nothing more than the accidental death of an old woman, and a husband that couldn’t cope with the loss. 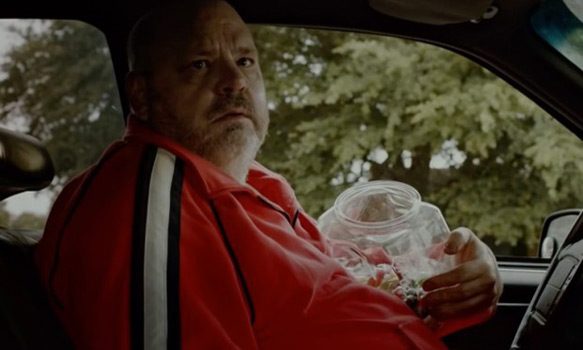 After moving into the house and turning the outside storage space into his art workshop, Jesse begins to suffer the same malicious taunting that drives Ray’s homicidal propensity. The movie follows Ray’s murderous measures and Jesse’s growing artistic obsession that entrances him and creates a dangerous environment for his family. Their paths cross on several occasions, as Ray is now fixed on obtaining a most prized piece of “candy” from the Hellman home. Also, the emotionless commissioned butterfly piece that Jesse was supposed to be painting for a bank is now taking on a more ominous and twisted form as he unfortunately becomes linked to Ray through the devilish disembodied voices that now fill his head and home.

The concept of The Devil’s Candy is incredibly interesting in spite of the fact that it is not anything entirely new. Then again, rarely does one find a Horror movie anymore that unearths territory which has not yet been previously explored in some capacity or another. Byrne was able to successfully expand upon the archetypal sub-genre by using art as a conduit, giving it power and revealing its potential risks once the artist becomes consumed by it. It will be exciting to see what Byrne will come up with next, as he has only just begun to tap into that ambitious, raw talent of his.

An aspect that will make or break many films, the acting significantly exceeded expectations. While Embry was able to epitomize the fixated and struggling artist; his transformation from loving, involved father into the isolated and tormented artist was effortless and one that viewers could find themselves connecting with. Appleby exquisitely took on the role of the concerned and scared wife fearing the loss of those closest to her, while Glasco was a delight to watch, as she excellently represented the Rock-obsessed teenager whose subsequent neglect results in damning consequences that nearly costs her, her life. Vince stole the show though; an interesting character that struggled with mental deficiencies that indicated either schizophrenia or potential possession, never making clear what exactly afflicts him until much later.

Additionally, Cinematographer Simon Chapman (The Loved Ones 2009, Killing Ground 2016) did a wonderful job of creating a cohesive and effective story flow. He also heightened the emotional impact by effectively translating the script just as well as the acting or the words themselves. The camerawork added depth and properly utilized all of the necessary elements, providing hints and motifs along the way that greatly added to the characters and the storyline. 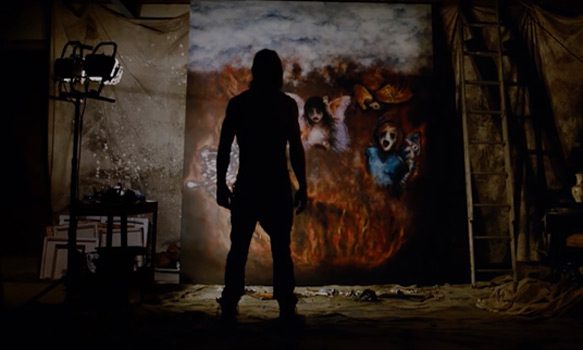 Then there is the film’s soundtrack, which is brilliantly handled with Heavy Metal from Slayer, Ghost, Machine Head, Metallica, among others. While it may be assumed that such a hardcore soundtrack might take away from the horror or somehow diminish it with such strong and fast-paced music, this could not be further from the truth. The carefully selected music perfectly accompanied the atmospheric and psychological horror that seemed to take place.

Movies that rely quite heavily on symbolism to set the tone or convey a recurring theme are sometimes criticized for lacking action or because they are often misunderstood. This was certainly not the case with The Devil’s Candy, as the strong symbolic imagery reinforced the scope of the evil that was being dealt with by both Jesse and Ray, and both through their various forms of art; music and painting. The colors red and black, and their representation of darkness and evil, were consistently shown throughout the film; albeit in the form of Ray’s Gibson Flying V guitar, his velour jumpsuit, the stained-glass cross on the front door of the Hellman home, the art gallery secretary’s dress and eye makeup, and even the gallery owner’s suit, amongst other examples.

With minimal special effects, they are handled with precision and care so they really did not need to be so over-the-top. In some cases, when it comes to gore and things of that nature, sometimes less is more, and the implication of such horror increases the fear instead of actually having to witness it. This definitely rings true with The Devil’s Candy because anything more than what was utilized would have taken away from the story, the theme, and the atmospheric horror of it all. Because The Devil’s Candy was inventive, amazingly acted, marvelously shot and scripted, and relied on less to tell more of the story, CrypticRock gives it 4.5 out of 5 stars. 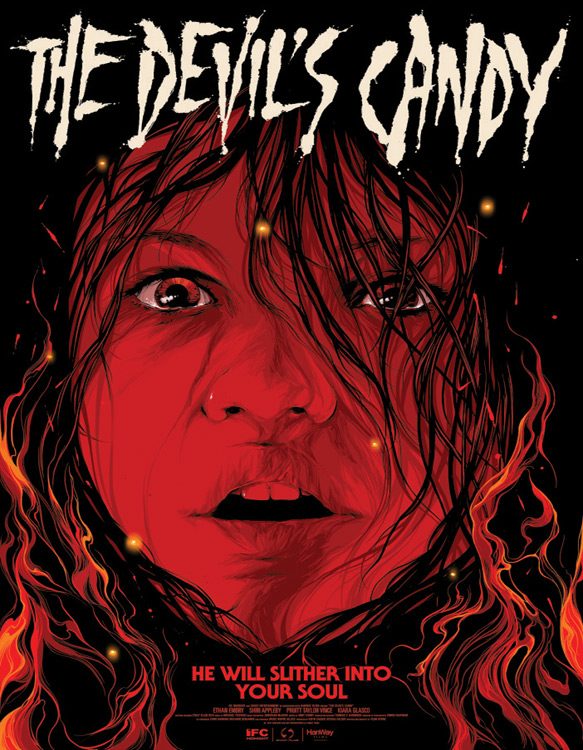 For more on The Devil’s Candy visit IFC Films

Demonic (Movie Review) Sator (Movie Review)
Like the in-depth, diverse coverage of Cryptic Rock? Help us in support to keep the magazine going strong for years to come with a small donation.