When “Whip It” hit the major U.S. and U.K. charts in the year the album containing it was released, Devo consequently became a household name for many music fans. The song enjoyed being a regular staple for many radio stations in the years that followed. In fact, only recently, at least in Canada, the song became literally attributed to a household chore—thanks to a TV ad jingle for a cleaning material that used the song’s melody. In some ways, the massive commercial popularity that songs like “Whip It” achieve could be really helpful to the career of the artists behind them. Such hit singles could really make artists instant superstars (or Rockstars, to be more appropriate). However, the downside of this is that a song’s extreme popularity could inevitably overshadow the individual beauty and legitimacy of the rest of the songs in the album where it came from. In many cases, the hit song could eclipse the band’s entire discography or even the whole band itself. For instance, so many listeners have become familiar with songs like “I Melt With You,” “Life in a Northern Town,” and “Don’t You (Forget about Me),” but they most likely could not recall Modern English, The Dream Academy, or Simple Minds—the bands behind these respective songs. Devo suffered the same: many listeners could easily chime in on the chorus of “Whip It,” but find remembering the name Devo a feat.

Formed in 1972, in Ohio, United States by Gerald Casale, Bob Lewis, and Mark Mothersbaugh, augmented by Gerald’s brother Bob Casale and friends Rod Reisman and Fred Weber, Devo may be regarded as one of the pioneers of New Wave music and the genre’s flag-bearers in the 1980s. Along with fellow fashionably quirky, musically melodic, and upbeat bands such as A Flock of Seagulls, The Vapors, The Knack, The B-52’s, and Blondie, Devo epitomized the New Wave music of that era. To date, Devo has nine studio albums on its members’ sleeves—from 1978’s Q: Are We Not Men? A: We Are Devo! to 2010’s Something for Everybody. The experimental and political nature of the band’s music was already apparent as early as the first album, but it was with the third album, Freedom of Choice, where the fun really began, or when the band seemed to have established their trademark style of quirky, upbeat, and synthesizer-guitar combo music. Some may blame “Whip It” for having wiped the rest of the album off the consciousness of many listeners, but it may be regarded also as the song that serves as the starting point for many listeners who wanted to rediscover the music of Devo.

Released in 1980, Freedom of Choice catapulted to popularity and peaked on the major charts in the band’s heyday in the 1980s with the strength of particularly the singles “Whip It” and “Girl U Want,” both of which to this day still get fairly prolific exposure on the radio, T.V., and original movie soundtracks. Compared with its guitar-oriented, punky predecessors, Freedom of Choice marked the beginning of the synthesizer-guitar combination style of Devo and of its popular band lineup that consisted of Mark Mothersbaugh, Gerald Casale, Bob Casale, Bob Mothersbaugh, and Alan Myers. The album consists of a dozen short and quirky songs, beginning with the guitar-driven stomper “Girl U Want.” Another upbeat headshaker, “It’s Not Right” is led by a synthesizer-produced bass riff. Third in line needs no further ado, the now virtually ubiquitous uptempo “Whip It,” which could literally send any New Wave fan to the dancefloor. Retrospectively, the main ingredients of this song that really made it very catchy were the opening drum beat; the interplay of staccato guitar riff, synth bass, and ghostly keyboard melody; and easy-to-sing-along-with rhythmical cheering-style lyrics.

A Synthpop track that easily stands out with its introductory synth-bass line, flute-sounding melody, and telegraphic keyboard riff, “Snowball” will not be out of place on a playlist that includes early Depeche Mode songs like “New Life,” “Dreaming of Me,” and “The Meaning of Love.” “Ton o’ Luv,” on the other hand, has that dark and sinister sound, owing to the low-register vocals, imposing bassline, and Middle Eastern–inspired synthesizer line in the coda. “Freedom of Choice” has that Industrial sound to it, reminiscent of some of the works of Throbbing Gristle and early The Human League. “Gates of Steel,” despite its pesky synth riff in the introductory interlude, still rings a bell of Sex Pistols’ “Anarchy in the U.K.,” because of the rhythm guitar and the confrontational vocal style; and this is significant, for it highlights the Punk ethos of Devo. “Cold War” is aptly titled, for its cold-sounding, edgy rhythm, and deadpan vocals. This mood flows seamlessly into the next track, “Don’t You Know.” Both punky and funky at the same time, “That’s Pep!” is danceable for its groove and angularity. Of all the tracks in the album, “Mr. B’s Ballroom” and “Planet Earth” have the most relaxed feel as well as the ones that carry the most Pop sensibility—a sensible way of ending the album in a graceful manner.

Yes, many music enthusiasts tend to remember bands that they like only for the hit singles, causing them to assume that the rest of such albums where these popular songs came from are lackluster and unworthy of further inspection. However, if they only have the patience and a keen sense of foresight and music appreciation, then these so-called hit listeners could have enjoyed more the music of bands they claim to be their favorites. For instance, Devo’s Freedom of Choice would be to them not only about “Whip It,” but also about the individual characteristic beauty of the other eleven equally engaging songs that it contains. 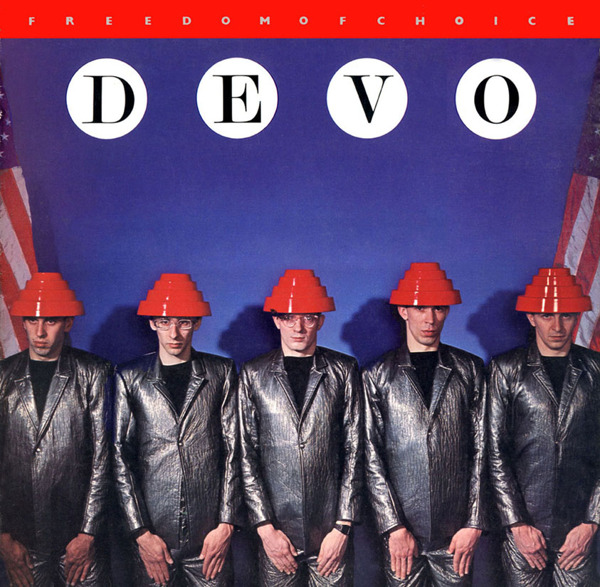 Purchase Freedom of Choice on Amazon