The musical pairing of the godfather of Heavy Metal, Ozzy Osbourne, along with the neoclassical guitar playing of Randy Rhoads was a match like no other. Their relationship began in late 1979 when Osbourne formed the band, The Blizzard of Ozz, after his departure from Black Sabbath earlier that year. With a lineup that featured Randy Rhoads (guitar), Bob Daisley (bass), Lee Kerslake (drums), and Don Airey (keyboards), the record label decided to name the group’s 1980 debut album Blizzard of Ozz, thereby introducing him to the music world as a solo artist. The move brought him a considerable amount of success. In addition, it also gave Rhoads a wider audience and thus more accolades for his stylish guitar playing.

Looking to take things to the next level with the follow-up release, Osbourne and his band returned to the Ridge Farm Studios in Rusper, England to record Diary Of A Madman during the late winter of 1981. Eagerly awaiting the sophomore album’s release, fans’ wishes were granted on November 7th of that same year. Well-received by both critics and fans alike, it entered the Billboard album chart at No. 16. while featuring three singles that made the United States Mainstream Rock Chart – “Flying High Again” at No. 2, “Over The Mountain” at No. 38 and “You Can’t Kill Rock and Roll” at No. 41. As early as May 10, 1982 Diary of a Madman was certified platinum by the RIAA and the sales just kept coming. To this day it has sold well over three million copies worldwide, showing Diary of a Madman is still making an impact 35 years later.

Sadly, the relationship of Osbourne and Rhoads was cut short when, while on tour supporting the new album, Rhoads was killed in a tragic plane crash. This happened on March 19, 1982, stunning the rock-n-roll world to its core. The tragedy occurred just days away from a much anticipated show at Madison Square Garden in New York City. Naturally, the tour was put on a brief hold, but resumed weeks later with guitarist Bernie Torme, who stayed less than a month before Brad Gillis finished off the run of dates supporting Diary of a Madman.

For old fashion listeners, placing the LP on the turntable and dropping the needle, “Over The Mountain” gets the heart pumping with a guitar solo reflecting the theme of the song. Equally as engaging,“Flying High Again” took everyone on another Metal-driven journey with the strong rhythmic back-beat of Daisley and Kerslake, with Rhoads’ guitar playing weaving high and low throughout. It was no wonder why this track grabbed the attention of so many fans, who made it the album’s highest charting single.

Taking the tempo down a little, but still keeping that Metal feel, Osbourne’s vocals shine in “You Can’t Kill Rock and Roll.” Becoming an anthem for so many hardcore Heavy Metal fans, it features the lyrics “Rock and Roll is my religion and my law, won’t ever change, may think it’s strange, you can’t kill Rock and Roll it’s here to stay.” It is difficult to forget those words. The album then gets down and dirty with “Believer,” the tempo rising to just the right speed from the last one. The song has a mystical feel and mean guitar soloing midway through.

Turning the album over to side two, “Little Dolls” is a fine example of what would later become the classic Osbourne sound signature. During this era in Heavy Metal, no album would be complete without the classic Rock ballad and “Tonight” fit that need very nicely. The composition beautifully accented Osbourne’s vocals while magical keyboards and Rhoads’ guitar soloing were ballads unto themselves, telling their own stories within the song.

Then “S.A.T.O.” harked back to the Metal sounds from the mid-1970s, bringing long time fans of Black Sabbath a more familiar Osbourne sound. Finally it ends with the title track, which lyrically tells the story of one man’s struggle with insanity. Having interesting time signatures and a very mystical tone, it draws listeners deep into this man’s turmoil before ending on a very climactic note.

Complete with eye opening artwork to go along with the music, it shows Osbourne on the cover looking like a madman in a scene where a boy creepily leers at a book seating at a table next to a dead white dove. The boy in the image is actually Osbourne’s son Louis. Provocative imagery, it came at a time when there was a Satanic scare in popular culture, one that continued with subsequential Metal albums, including Iron Maiden’s Number of the Beast in 1982.

Re-released in 2002 amid controversy, the original drum and bass tracks were re-recorded by Robert Trujillo (bass) and Mike Bordin (drums), who were playing with Osbourne at that time, thus removing the original recordings of Daisley and Kerslake. It was thought to have been done in retaliation to a successful lawsuit in which Daisley and Kerslake sued Osbourne and his manager (and wife) Sharon Osbourne for songwriting credits and royalties for their contributions to Diary of a Madman, and honestly, was kind of puzzling to many fans.

Re-released again in May 2011, the deluxe 30th anniversary editions of Diary of a Madman and Blizzard of Ozz were put out with the original bass and drum tracks restored. This release of Diary of a Madman features bonus tracks and a second CD entitled Ozzy Live, featuring an entire unreleased concert performance from the Blizzard of Ozz 1981 US tour featuring guitarist Rhoads. Additionally, a box set was also released which included the re-mastered editions of both albums on CD as well as vinyl, and a DVD documentary entitled Thirty Years After The Blizzard.

Thirty-five years later, Diary of a Madman has more than stood the test of time. No Metal fan’s collection can be complete without it as the music’s theme is timeless and a true example of classic traditional Heavy Metal. Since its release, Osbourne has won a Grammy and been inducted into the Rock & Roll Hall Of Fame. He also released a total of eleven solo studio albums over the years, while rejoining Black Sabbath for the second time in 2010, even releasing a studio album with them, 13, in 2013. This past year Osbourne toured with Black Sabbath and is in the process of completing what Black Sabbath said would be their final tour. That in mind, fans of Osbourne’s solo work can keep hope alive that he will return with more music in the future. 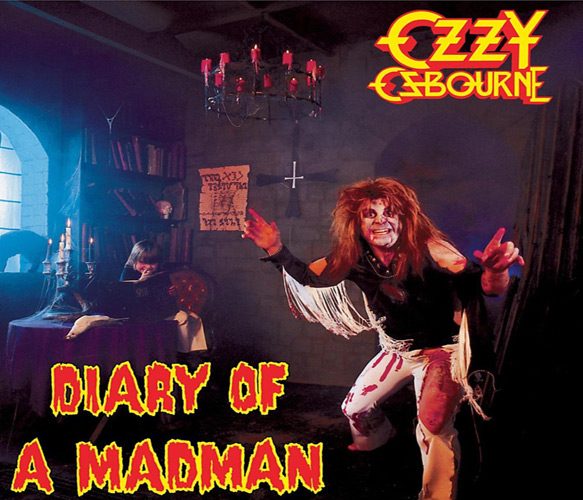