When Japan’s Dir en Grey announced a headlining North American fall tour with France’s Dagoba back in July this came to the excitement of many fans. Now internationally known as a metal act to be reckoned with, Dir en Grey choose a solid touring mate, bringing Dagoba across to North America for the first time in their career. Midway through this November trip, the tour landed at Irving Plaza in NYC on Veterans Day holiday Monday the 11th. A massive crowd of diehard fans congregated for the evening of metal.

Opening things up from Marseille, France were Dagoba. This band has been together since 2000 and has been a strong leader in the growing French metal scene. Having released 5 full length records their sound has morphed over the years taking influence from black, death, industrial, and thrash metal. With a strong following in the European scene it is surprising they had yet to make it to North America in the past decade. Now in 2013 they release perhaps their most accomplished record in Post Mortem Nihil Est and make their first trip to North America. Truly an exciting time for Dagoba and their fan base here in the states, it was clear they had an eager bunch of fans ready to see the band perform live for the very first time. 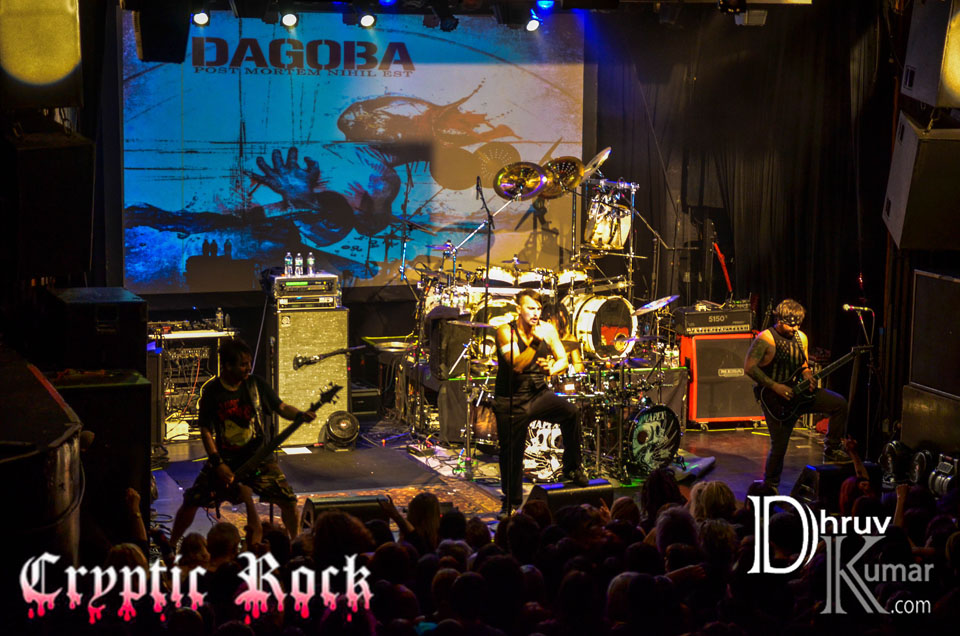 As Shawter (vocals), “Z” (guitars), Werther Ytier (bass), Franky Constanza (drums) came onto the stage you could tell there was something special about to happen. Within moments the band erupted into “I, Reptile”. Constanza’s drumming attack had necks snapping back with the deep growls of Shawter. With this grand opening they went back into their history playing the track “The Man You’re Not” off the 2006 What Hell Is About album. Fans have waited over a decade for this and they showed their appreciation with metal horns raised high while screaming loudly. Next it was time for the epic assault of “The Nightfall and All Its Mistakes”. It was during this track that the audience, which may not know of Dagoba, were surprised to hear a powerful clean vocal mixed in by Shawter. What the audience would come to learn as the set went on is Dagoba is a diverse band which mixes brutality with melody. The next song in the set was evident of that with “Black Smokers (752° Farenheit)” which predominately showcases Shawter’s passionate clean vocals. Now deep into their set Dagoba rewarded the audience with the lead track off Post Mortem Nihil Est in “When Winter…”. Perhaps the biggest highlight of the set was the powerful track “The Great Wonder” off the new record. Shawter poured his soul into the performance of this and every other song in the set. The performance closed out nicely with the killer track “The White Guy (Suicide)”. If you are not aware we recommend you check out the album recording of this track which has a guest vocal appearance by I.C.S Vortex (Arcturus/Dimmu Borgir).

Shawter and the rest of Dagoba seemed to have extra adrenaline pumping through their veins as it being their first time playing NYC. He graciously thanked the audience and showed his appreciation for this opportunity to make it to the USA. Judging by the intensity of their set and the response of the audience, this is only the beginning for Dagoba and the states should expect to see more of this talented metal band. 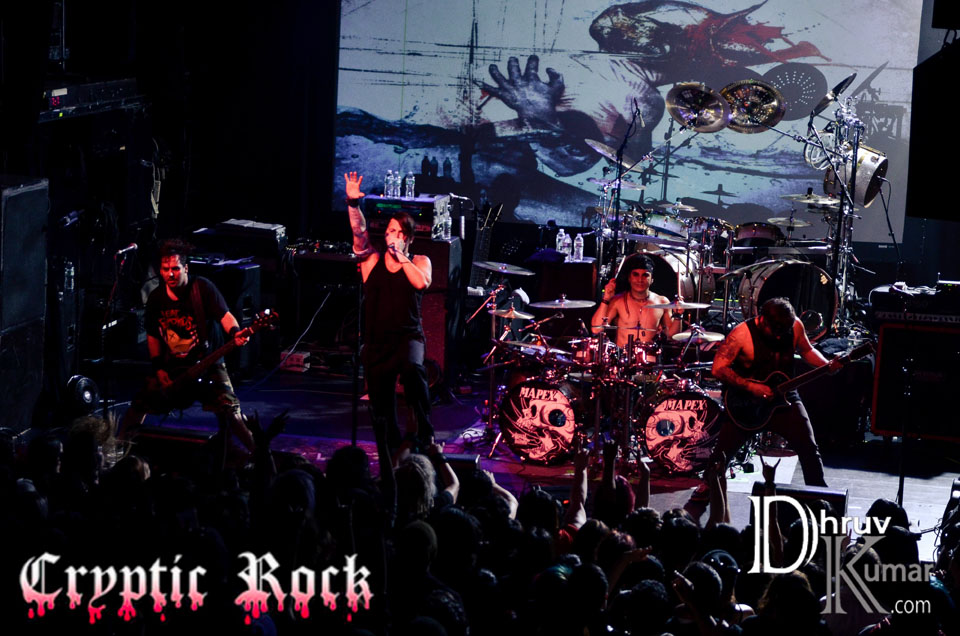 After a short intermission it was time for Japanese metallers DIR EN GREY. Formed in 1997, the band became known as a premier metal act in their homeland and it wasn’t before long the word spread from the Far East to Europe. By the time 2005 hit the band was touring Europe and selling out venues. A mere year later the band made their first trip across the ocean to North America only to sell out shows within minutes of going on sale! As they say… the rest is history and DIR EN GREY is now an  international metal icon. Having graced USA audiences a few times now, it came to much fans disappointment last year when the band was forced to cancel their spring 2012 tour due to throat issues by Kyo. Now healed and ready to rock n roll, DIR EN GREY are back on the Ghoul Tour 2013 here in New York City.

Irving Plaza erupted as soon as the band members came out screaming and cheering like mad. Creating anticipation, each member was on stage while playing “REIKETSU NARISEBA”, and then Kyo appeared midway through. Cloaked in a robe, Kyo belted out ear piercing screeches much to the fans detail. it was quite the dramatic opening, which lead into the dark guitar melody played by Kaoru and Die for the track “Karma”. Recently the band released The Unraveling EP, in which they remade a few old tracks and “Karma” was one of them. Fans seemed to thoroughly enjoy the 2013 edition of the track.

The set went on from there with a generous offering of new and older tracks including “Unraveling”, “RED SOIL”, “BUGABOO”, and “Bottom of the death valley (2013 Version)”. Kyo is definitely a showman with an emotional performance throughout. Although the band has toned down their stage attire over the years, there is a still a very theatrical sense behind their live show. The drama on stage created a horror film like atmosphere and there were enjoyable peaks and valleys such as the dark ambiance of interludes like “INWARD SCREAM”. Toshiya’s bass playing along with Shinya’s drumming were a magnificent combination and prove the longevity the band has as a unit makes them one of the most cohesive out there. Always being unique and unconventional, the band’s 15 song set played out wonderful especially mixing in more mellow tracks like “Dead Tree” and the dynamic vocal driven track “RINKAKU”. It’s no wonder Kyo has had throat issues over the years judging by the absolutely intense and vigorous vocal workout he puts in night after night.

As the evening came to a close fans were not ready to say good night. A large Asian dominated crowd cheered on DIR EN GREY with a cultural pride that had to make you smile. The band rewarded their fans with a 3 song encore including “OBSCURE (2011 Version)”, “THE FINAL (2013 Version)” and “HAGESHISA TO, KONO MUNE NO NAKA DE KARAMITSUITA SHAKUNETSU NO YAMI”. Ghoul Tour 2013 marches on to the next city on the schedule, but for this one night New York City had the pleasure of seeing a genuinely captivating sight and sound show.