Dirty Dancing – The Time Of Your Life 30 Years

It was the summer of 1987, August 21st to be exact, when the small film Dirty Dancing about love and dance found a home in the hearts of moviegoers. Frances “Baby” Houseman and Johnny Castle gave us more than great dancing and that iconic lift, thanks to Jennifer Grey and Patrick Swayze’s magical chemistry, and had every girl dreaming of a summer in the Catskills—not a dream destination, but one can dream of meeting their own Johnny Castle. Directed by Emile Ardolino, Dirty Dancing is more than a chick flick, more than a dance flick, and is rightfully decade defining 30 years later. 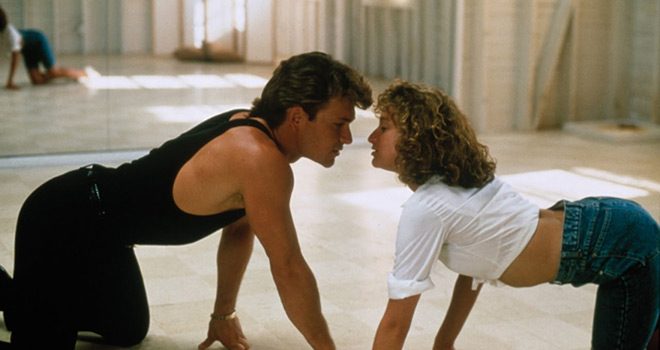 Simply put, it is a coming of age story about a girl that grows up, falls in love, and learns to dance, but also shows just how strong of a woman she is. Baby (Jennifer Grey: The Cotton Club 1984, Ferris Bueller’s Day Off 1986) makes the first move, she stands up for Johnny (Patrick Swayze: Ghost 1990, Point Break 1991) when his job is threatened and she has no regrets. An award winning flick for numerous reasons, it seems as though Dirty Dancing’s popularity grows with each generation as its most memorable moments have been absorbed by pop culture.

Baby, carrying a watermelon, crawling on the floor towards Johnny as the two lip sync to Mickey & Sylvia’s “Love is Strange,” the lift, which Ryan Gosling and Emma Stone respectably imitate in 2011’s Crazy, Stupid, Love, and the countless uses of term “Nobody Puts Baby in the Corner.” This line means so much to fans because it is that moment when Johnny’s admiration for Baby’s fearlessness not only affirms her strength but allows him to be brave enough to come back to Kellerman’s, fight for the girl he loves, and stand up for himself. But, it is also ridiculously romantic. Patrick Swayze—the perfect boyfriend. Swoon!

The story of Dirty Dancing plays out like a fairy tale, even if the circumstances behind this love story seem far from it. The film is set in 1963 and 17-year old Baby Houseman is on vacation with her family at Kellerman’s, a resort in the Catskills. Baby has plans. She is going to study economics in underdeveloped countries and then enter the Peace Corps. But, everything gets turned upside down when she sees the bad boy dance instructor from the wrong side of the tracks, Johnny Castle. She crushes hard and eventually gets roped into Johnny’s world when she discovers that Johnny’s dance partner Penny (Cynthia Rhodes: Flashdance 1983, Runaway 1984) is pregnant thanks to “Robbie the creep” (Max Cantor: Diner TV short, Fear, Anxiety & Depression 1989). 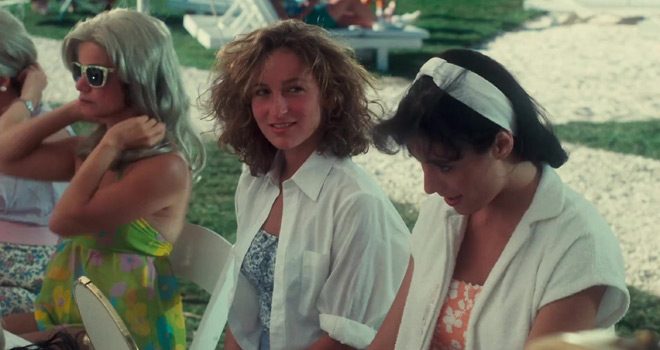 Penny plans to illegally have an abortion but needs money, which Baby borrows from her father. But, money is not the only issue. Johnny and Penny perform at another resort and she has to miss the performance in order to have the abortion, which will cost her a season’s salary. Enter Baby Houseman. Johnny has his work cut out for him but he trains Baby so she can fill in for Penny and a romance (and dancer) is born.

Movie lovers have Screenwriter Eleanor Bergstein to thank for the story behind Dirty Dancing, which was based on her own childhood. The daughter of a Jewish doctor from New York, Bergstein spent summers in the Catskills, participated in “dirty dancing” competitions, danced with friends in basements in Brooklyn, and had the nickname “Baby” as a young girl. The film became a passion project for Bergstein after an erotic dance scene was cut from one of her other scripts and she made sure this time around the dancing was as dirty as she wanted. Bergstein chose Kenny Ortega, who worked with his idol and eventual mentor Gene Kelly on the 1980 film Xanadu, to do the choreography. Ortega drew from various influences including street salsa, Colombian style salsa, Cuban rhythm steps and R&B to create “dirty dancing.”

All this said, a lot of heart went into the film, but not a lot of money. Interestingly enough, Dirty Dancing was filmed on a estimated $6 million budget but raked in close to approximately $64 million domestically and $214 million worldwide. The movie’s budget made it impossible to actually film in the Catskills, and so, the facade of the fictional resort of the film, Kellerman’s, comes from the Mountain Lake Lodge in southwest Virginia.

In addition, another location at a former boys camp in Lake Lure in western North Carolina was also used to give the crew more time to shoot scenes since it did not have the same amount of tourist activity, and with the power of editing, it all came to life. For fans that want to experience their own taste of Dirty Dancing, they can visit Mountain Lake Lodge for a themed weekend getaway where they can visit filming locations, stay at the cottage where Baby and her family stayed in the film, and shake their maracas with some dance lessons. 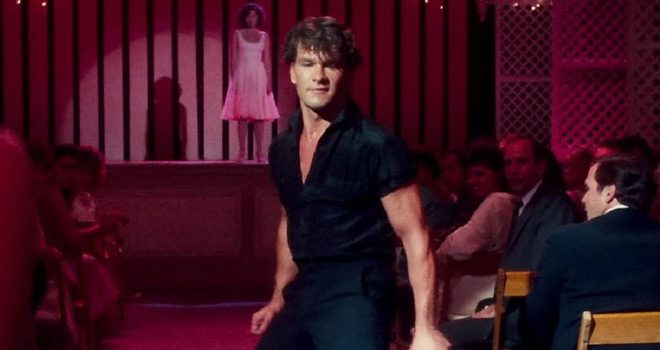 Dirty Dancing had a lot of ingredients that made it so memorable, but the electricity between Grey and Swayze is undeniably an integral part of the film’s success. Aforementioned Film Director Ardolino stressed the importance of choosing actors that could dance, refusing to use stand ins. Grey was a trained dancer like her father, Academy Award winning Actor and Dancer Joel Grey. Swayze was eventually cast as Johnny and it could not have been a better choice.

Swayze was a dancer before beginning his acting career, starting out at his mother’s dance school in Texas and moving on to study at the Joffrey and Harness ballet schools in New York. The man had dance chops and it showed. Rhodes and her amazing legs did not hurt either. The authenticity of the dancing helped to make the film more believable and so did the chemistry between the film’s leads.

The connection between Baby and Johnny seems so real because it was not an instantaneous romance. There was tension in the beginning when Baby narrows her eyes and scowls when Johnny repeatedly declares that she cannot dance. He continuously gets annoyed with her when they are training whether it is Baby’s frame or when she bursts into giggles during what becomes a sensual moment and the first part of their famous dance. The truth behind that moment is that it was meant to be serious, but Grey was exhausted and began giggling through many takes. Swayze began to get annoyed because he wanted to get the scene over with and what ended up on-screen was a real moment between the two actors. The magic between Grey and Swayze has since been impossible to recreate. 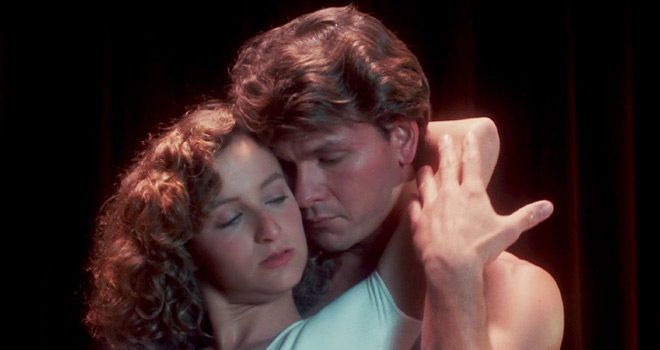 Bringing everything together was the music, perfectly complementing the story and setting the mood for the scenes. You cannot have a great dance movie without great music, and Dirty Dancing’s soundtrack takes the cake.

Classic hits like Frankie Valli and The Four Seasons’ “Big Girls Don’t Cry,” The Ronettes’ “Be My Baby,” The Contours’ “Do You Love Me,” Solomon Burke’s “Cry to Me,” and Otis Redding’s “These Arms of Mine” were rounded out by original compositions that hit the Billboard charts, including “Hungry Eyes” by Eric Carmen, “Yes” by Merry Clayton, “She’s Like the Wind,” which was co-written and performed by Patrick Swayze along with “(I’ve Had) The Time of My Life,” performed by The Righteous Brothers’ Bill Medley along with Jennifer Warnes. Star studded complete with classic tunes and some newly written hits just for the film, the soundtrack of Dirty Dancing spent 18 weeks at #1 on the Billboard 200 album charts and went Platinum eleven times for good reason.

Dirty Dancing makes you feel good because dance, music, and love inspire that emotion. Taking a line right from the film, Johnny Castle said it best, “It’s a feeling, a heartbeat.” That feeling has given audiences the time of their lives for thirty years with no end in sight. 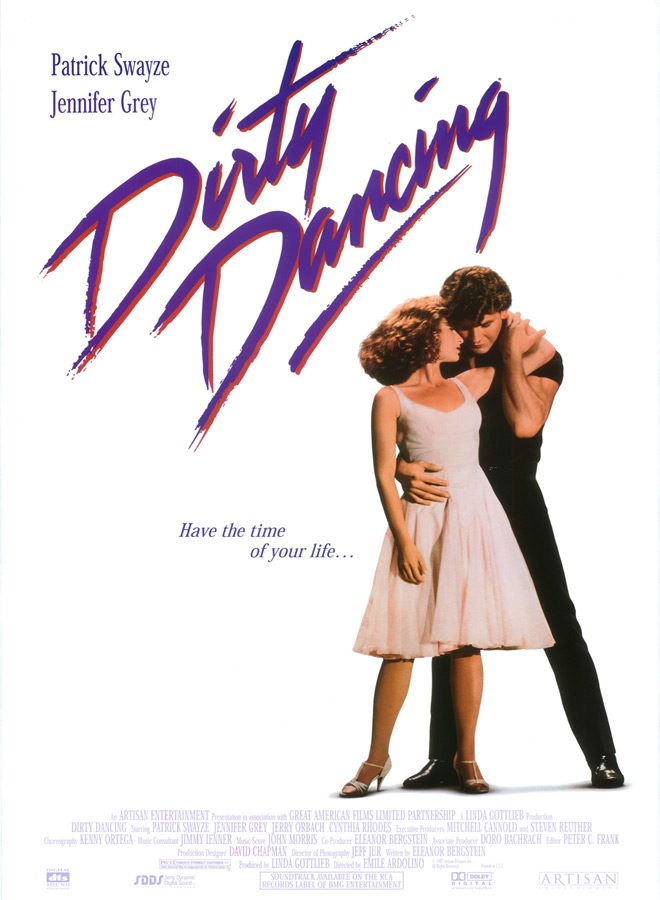