Summertime is the perfect time to kick back , chill out, and what better way to do so then with the feel-good sounds of Dirty Heads. Combining reggae, hip hop, and rock, Dirty Heads is one of the fastest rising acts in the respected sub-genre with four consecutive highly charted albums including their newest effort Sound of Change.   Taking to the road for a spring tour back in April the band kicked off the first leg of their summer tour on July 16th which see’s them stopping in 29 cities along the way.  On Thursday July 24th, The Paramount in Huntington, NY was filled with positive  energy when Dirty Heads arrived with Pepper, Aer, and Katastro to perform a long night of fun and colorful music. The rapidly rising reggae rock group known as the Dirty Heads, have been together since 2003, when their first release,and the hit single, “Lay Me Down,” featuring Rome of the legendary band Sublime quickly created buzz.

The first band to arrive on the stage was independent band Katastro.  Coming from Tempe, AZ the band mixes surf music, with their mellow strummed guitars, soft harmonies, and reggae rock.  Consisting of vocalist Andy Chaves, drummer Andrew Stravers, guitarist Tanner Riccio, and bassist Ryan Weddle Kasstro, they set the mood right from the get go.  Performing a great portion of the songs from their most recent album, Gentle Predator, the laid-back atmosphere had everyone nodding their heads with the grooves. Expressing how lucky they felt to be on tour with the likes of Pepper and Dirty Heads, it was easy to see judging by their music and style they fit right in. Some of their top tracks include “Move Like Creatures,” “Alone,” and “Watch it Burn”.  Fans of 311 and Incubus will love these guys and they are truly a band to look out for. 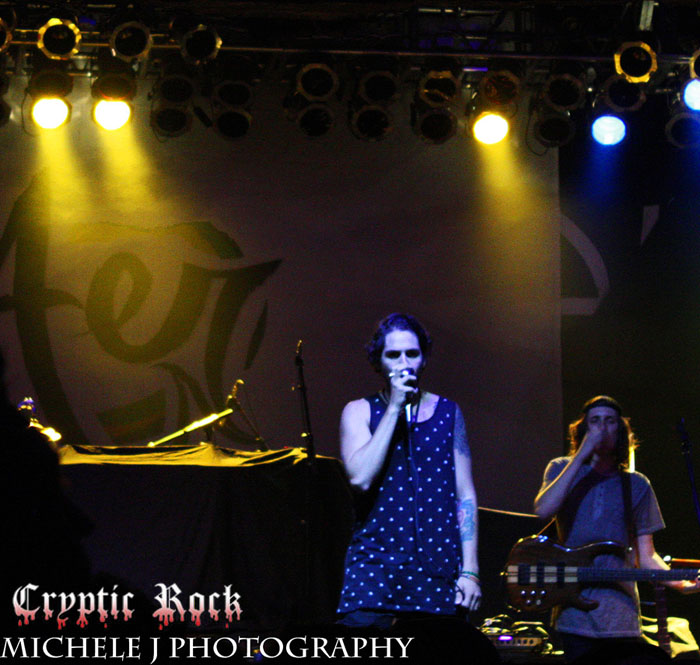 The next band that came on was New England based band Aer.  Led by vocalists David von Mering and Carter Schultz the two’s innovative hybrid of hip hop and rock make them one of the freshest band’s in the Boston area.   Coming onto the stage with a DJ, bassist and drummer von Mering and Schultz had were full of energy jumping around on stage and engaging the audience as if it was an all-out party. Most of the moments Von Mering and Schultz shared on stage were extremely visual to the audience leaving a lasting impression. They did not let up and rattled off some of their best songs, which included tracks like “Floats My Boat,” and “Feel I Bring.”  One of the most exciting tracks that caused screams from the whole audience was the popular dance song, “She Says She Love Me.” Most of the songs that they played were from their new self-titled album while sprinkling in others from 2012’s The Bright Side. As they continue to be compared to bands such as Schwayze, their Aer Fresh Movement continues to grow.

When people think of reggae rock, there are two main bands from the 1990’s that automatically come to mind; the first one is Sublime and the second is most likely Pepper. Hailing from Hawaii, since 1997, Pepper has been received with love and enthusiasm when they arrived on the stage. After years of tireless touring, these guys are legends on the scene and exhibit comfort in their own skin as musicians while upholding the highest level of professionalism.

Wasting no time to get things going, they early on played their huge hit, “Stone Love” followed by “Give It Up” both of which had everyone singing along.  Showing their deep appreciation at every possible moment to their fans, they expressed how much they loved everyone and were thankful for their support.   What is truly beautiful about this band, is that after decades of playing together Bret Bollinger, Kaleo Wassman, and Yesod Williams still have such beautiful brotherly love and chemistry between them that is clear to the audience and admirably cannot be broken. Some of the other songs they played included “Higher Ground,” and “Ashes.”  Bolinger constantly stated how he wanted to take the audience back to Hawaii with them, which this crowd would not have minded judging by their level of joy through their generous set which concluded with “No Control.”  Pepper are the perfect band for letting loose and creating memories that last a lifetime.

With everyone having an absolute blast, Dirty Heads came out to a pounding roar from the audience. They approached the stage and started out with a bang, performing “Hip Hop Misfits” followed by newbie “Franco Eyes.” Lead singer, Dustin Bushnell came out strong and kept that level throughout the entire set.  Moving about the stage and giving off sensational feelings of happiness, Dirty Heads was lively and down to earth.  Playing fan favorites which included the Matisyahu collaboration “Dance All Night” and “Stand Tall” the floor was moving non-stop.  Both of these songs, along with most of their catalogue exemplify the perfect sounds to listen to and dance to while on the beach.

Giving fans their first live experience of Sounds of Change, Dirty Heads offered up fresh new material including songs “Burials “, “Burn Slow”, and “Radio” amid other crowd-pleasing songs such as “Cabin By The Sea” and “Spread Too Thin.”    Balancing the songs evenly, there was no downtime and their first number one single “Lay Me Down” made for a great later addition before winding down the set “My Sweet Summer” and “Sounds of Change.”  Taking a moment to soak up the moment they treated the audience to an encore doused in hip hop flavor with “Medusa”, “Check The Level” and “Silence”  as the background dropped to a drawing of the mythological legend with tie-dye eyes.  Dirty Heads encouraged their audiences to have fun and live life to the fullest, and that is just what every single fan celebrated at The Paramount on this flawless summer evening.