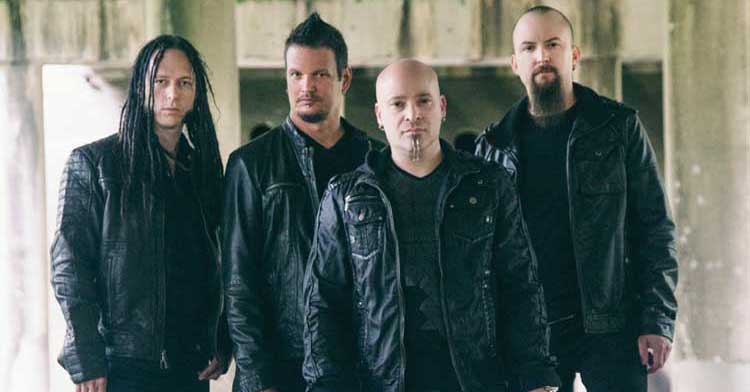 After their original lead singer parted ways, in 1996, Brawl was renamed Disturbed with new vocalist, David Draiman, Dan Donegan on guitars, Mike Wengren on drums, and Steve “Fuzz” Kmak on bass.  Two demo tapes with “The Game,” “Down with the Sickness,” and “Meaning of Life,” as well as “Want,” “Stupify,” and “Droppin’ Plates” featuring the band’s new mascot, “The Guy,” were floated around.  Giant Records bit, and in 2000, the band dropped The Sickness, an unabashed force feeding of gravelly vocals and tight riffs, which sent them on a course for the upper echelons of Metal stardom.  Soon, they were getting invited to festivals like Ozzfest, where they rubbed elbows with bands like System of a Down, Lacuna Coil, DragonForce, Avenged Sevenfold, and Hatebreed, as well as being invited to tour with bands like Marilyn Manson, 10 Years, and Ill Niño.

As Disturbed’s reputation spread,  they were invited to take part in tracks like Korn’s Jonathan Davis written “Forsaken” for 2002’s Queen of the Damned soundtrack, as well as the video game Rock Band, where players could play the tracks,”Indestructible,” “Inside the Fire,” and “Perfect Insanity” all while releasing four more studio albums that featured memorable songs and sold well.  Then, Disturbed went on a much needed break after years of relentless touring and recording.  In the break, Draiman began new band Device, Donegan and Wegren joined up with Dan Chandler of Evans Blue, calling it Fight or Flight, and bassist John Moyer spent time with Adrenaline Mob. Not bad for a bunch of guys taking a break.

Now resurrected, Disturbed return in Summer of 2015 with a video and pictures of “The Guy” on life support, and fans brows raised.  Could Disturbed be resurrecting?  Another video showed “The Guy” awake with a countdown, but for what?  Then, the band officially announced they were back, and a new album would be forthcoming, entitled Immortalized, and  fans sang the praises.  Their sixth overall studio record and first since 2010’s Asylum, Immortalized sees the band bringing in Kevin Churko (Ozzy and Papa Roach) to produce the new material.

Immortalized, thirteen tracks on the standard edition with three bonus tracks on the deluxe edition, is a thoughtfully underscored and in-your-face social commentary set to dark Metal that takes no prisoners. Kicking off with “The Eye of the Storm,” starts off the album in a deceptively tranquil way with a melodic guitar solo of gentle riffs followed by the rush of title track, “Immortalized.” The latter is a bold statement that Disturbed is back with cutting guitars and accompanying drums as Draiman sings, “This is one time/this our time/we won’t be denied…”  Next, “The Vengeful One” demands attention from the first fist-pumping beats and riffs in this track of a person, or persons, taking it upon themselves to avenge perceived wrongs.  Moving on to “Open Your Eyes,” a head-bobbing piece that tells the listener to pay attention to the world around and not feed into everything.

Keeping with the seeing past the end of your nose theme is “The Light” with a melody that harkens to The Who in this track of tragedy and darkness helping us to find answers.  The next track asks, “What Are You Waiting For.”  This biting track, like Disturbed is known for, takes the listener by the neck to show the world keeps spinning with or without you, and they state, “Break new ground and defy it/Don’t let the world outside/Leave you cornered and alone.”  Electronica and Metal mashup with a pinch of perhaps Ska is the melody of “You’re Mine,” a track of longing; “I’m burning inside/and we both know why/because you’re mine.”  “Who” begins with an air riff, then, Draiman’s gravelly voice cuts in this track of gloating betrayal. A phone ringing, with a voiceover, precedes “Save Our Last Goodbye,” followed by a simple, hard-edged intro that carries throughout in this track of not wanting a relationship to end. Track number ten is “Fire It Up.”  As the boiling sound bite starts and fades into a ripping riff, the drums cut in while Draiman shows his vocal dexterity changing between a Gothic-like voice and his patented gravel as he tells of the state of “smoking;” “Fire it up/’cause when I fire it up/I feel like serenity/I feel like serenity… is mine.”

Adding to Disturbed’s catalogue of covers is “The Sound of Silence,” which was originally done by Simon and Garfunkel in 1964.  As with previous covers like Genesis’ “Land of Confusion” and Judas Priest’s “Living After Midnight,” Disturbed captures the mysterious ambience of the song while adding their own flavor.  Whispers hail in “Never Wrong,” giving way to a defiant beat complete with a searing guitar solo while Draiman tells of someone who thinks they are always right even when they are wrong. Lucky number 13 is “Who Taught You How to Hate;” a drum-driven tune accompanied by equally driving guitars in this story of someone asking when another became so jaded as to be ask, “Who taught you how to hate?”  The first bonus track is “Tyrant.”  This track begins deceptively soft, then ups the ante as the drums keep the cadence Draiman follows as the story of overbearing tendencies unfolds. News voiceovers bring in “Legion of Monsters” as the head-banging drums kick in with underscored guitars in this track of blindly following anybody. Closing Immortalized is “The Brave and the Bold.”  This track harkens to a fun roadhouse tune of positivity as the guys sing, “You’re no longer alone tonight/you’re coming into your own tonight.”

After a five year hiatus, Disturbed has returned with what they are known for. With Immortalized, they do not alienate their established fanbase, but show a sense of maturity that comes with personal growth to draw upon and gain the ear of other listeners, possibly listeners that missed out on 2010’s Asylum. With that said, Disturbed fans can repent because they are back! CrypticRock gives Immortalized 5 of 5 stars. 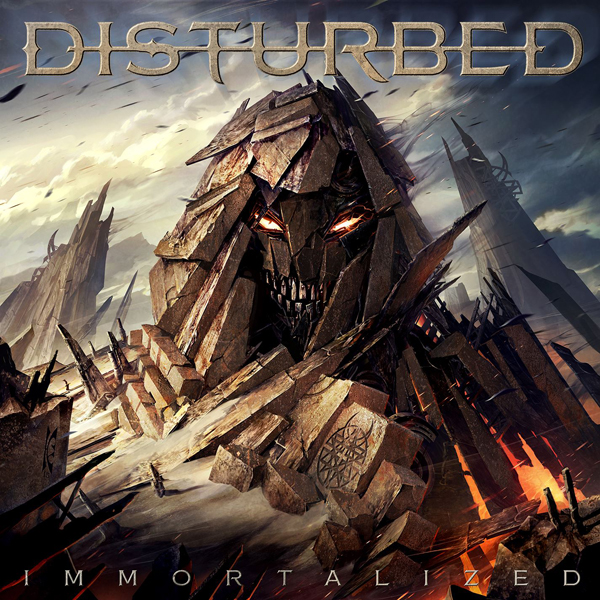