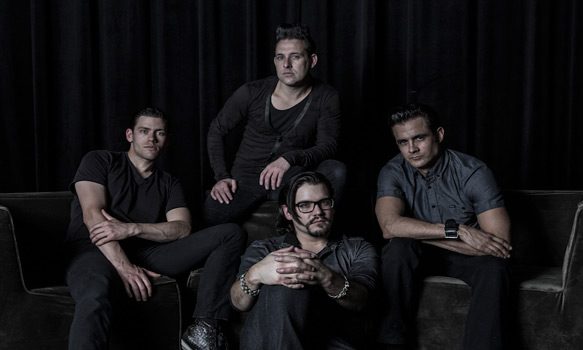 A band that refuses to be categorized, Dommin are equal parts melancholy ’80s ala The Cult, Gothic Hard Rock ala Type O Negative, and often times upbeat, Rockabilly riffs ala Tiger Army. Of course, what can you expect of a band led by a man who lists Frank Sinatra, Faith No More, Tears For Fears, Nirvana, Beethoven, and Sia among his musical favorites? The Hard Rock quartet hail from the City of Angels where, in 1999, they were formed by Singer, Songwriter, and Guitarist Kristofer Dommin. Originally a family band, Dommin was the brainchild of Kristofer and older brother Stephen, who would leave the band in 2008 to focus on his family.

In 2005, Dommin recorded their independent release, Mend Your Misery. Promoting the release across social networking site MySpace, Dommin would gain enough attention to attract first a publishing deal for Kristofer in 2006, followed by a record deal two years later. On their way, Roadrunner Records released the band’s major label debut, Love Is Gone, in February 2010. A glorious debut full of Gothic noir and modern Rock sensibilities, the album’s addictive “My Heart, Your Hands” would go on to be featured as an iTunes “Song of the Week.” With its Fifty Shades of Grey meets American Horror Story visual depiction, the track about putting full trust in a lover’s hands was enslaving, anthemic, and with its brilliantly artistic video, demanded attention be paid to the young band.

That attention would manifest itself in a demand for prolific touring across the United States, Australia, and much of Europe, sharing stages with such eclectic artists as Rob Zombie, Combichrist, HIM, Wednesday 13, The Birthday Massacre, Lacuna Coil, Black Veil Brides, Bullet For My Valentine, and Volbeat. There was also an appearance on the Warped Tour, as well as several nominations in yearly awards polls in Metal Hammer and Kerrang magazines.

Come 2012, however, major personnel changes at Roadrunner Records left Dommin feeling less a priority than many of the other artists on the label’s roster. A decidedly difficult decision to make, the band opted to leave the label and strike out, once again, as free-agents. Unfortunately, corporate red tape left them on hiatus while contractual obligations were resolved. Not one to disappoint his fans, Kristofer turned to his personal Facebook page where he released one new track, titled “Desire,” and an incomplete track, titled “I Die,” – along with three cover songs – to sate fan’s hunger for new music.

Dommin’s Guitarist/Vocalist Dommin, Bassist Billy James, Keyboardist Constantine X, and Drummer Cameron Morris triumphantly returned in 2015 with their second full-length album, Rise. Free from the constraints of a label, but without the financial backing thereof, and wary of the fan response, the band announced their plans for a new CD, as well as the crowdfunding campaign to fund that record. Within mere hours of their online post, the project had reached its target financial goal and it would go on to raise eleven times that intended number. The results were astounding, setting the band’s mind at ease and cementing their triumphant return.

Finally, collective breathe, the band’s third full-length album, Beautiful Crutch, was released via DNRecords on the Winter Solstice in December 2016. Produced and mixed by band namesake Kristofer Dommin, the album contains eleven tracks that run the gamut from Hard Rock to Rockabilly, all with a heavy hopefulness in their lyrics. Love and relationships are themes throughout.

Beginning with the gritty sound of “Desire,” there a sensual ode that is all parts of the band’s signature sound: bits and baubles of ’80s, Hard Rock, Goth, and Rockabilly. On their website, Dommin.com, fans can view a black-and-white video for the song that contains the lyrics and a sultry blonde clad in black lingerie.

Then there is bass heavy “This World” with a church bell effect that harkens back to “My Heart, Your Hands” and it is that beautifully macabre-sounding anthem for the disenchanted. “This world was never meant for us, we don’t belong here . . . there’s so much out there,” sings Kristofer. This is not some weepy anthem to despair to, but rather a celebration of the non-conformist; a declaration of pride in being unique. Dommin acknowledges that we are all snowflakes: no two alike.

The album’s title track, “Beautiful Crutch,” embraces the idea that each of us has that something that is our light in the fog; a crutch that gets us through even the darkest of days. It is a lovely sentiment, and a bit of a more personal side of Dommin. Similar glimpses into Kristofer’s mind appear throughout the album, in songs like self-explanatory “Vulnerable” and the emotional “I Die.”

While not the Cheap Trick song of the same name, “The Flame” is a perfectly bizarre amalgamation of cellos and strings, piano, screaming background vocals, as well as poetic lyrics that speak of the death of a relationship’s fire. Complete with guitar solo, this is Dommin at their most diverse and sounding just as phenomenal. It is this odd blend of mismatched elements that place Dommin into a category all their own – able to tour with the likes of Rob Zombie and then cover Sia’s latest.

This album marks an experimental phase for the band. Many of the tracks mix and blend elements throughout, including the over six-minute epic “The Saddest Dream.” Beginning as an electronic song that evokes the likes of Enigma, the track slowly evolves into a guitar-laden plea for freedom, before slowly fading back into the abyss of electronics. For Dommin, it works. As does the laidback classic Rock feel of final track, “Outer Space,” which actually borders on Country music. “Open up your arms, open up your mind. You’ll be amazed at what you find,” invites Kristofer in a track that demands listeners not pigeonhole this band.

Beautiful Crutch is an album full of memorable hooks (“Show Me,” “Madly”); tenebrous, Gothic sonancy; and sanguine lyrics that speak of relationships, love, and finding one’s place in this crazy world. It is a classic oxymoron: the happy Goth. Considering that Dommin are a band that are beyond impossible to categorize, this extreme contrariety should come as no surprise. The beauty of the band is their unwillingness to box themselves into any particular genre and Beautiful Crutch continues this tradition. For this reason and so very many more, CrypticRock gives Dommin’s Beautiful Crutch 5 out of 5 stars. 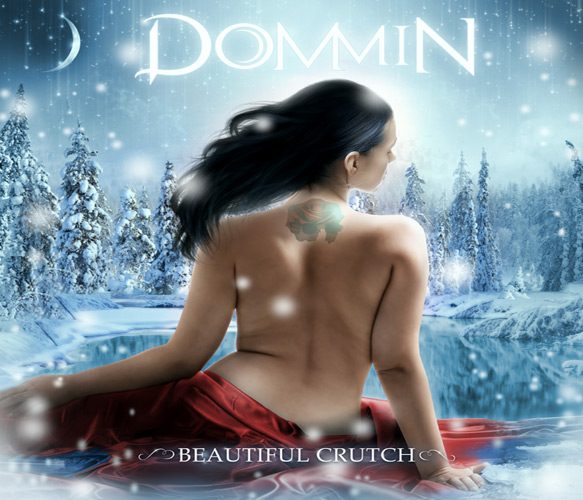