“Knock once to wake her from her bed, twice to raise her from the dead…” or so goes the unsettling urban legend of Mary, the demonic, child-stealing witch. Set for release in theaters, on VOD, and HD Digital via IFC Midnight on February 3rd comes the hair-raising Horror flick, Don’t Knock Twice. From Red & Black Films and Seymour Films, the new movie was directed by Caradog James (The Machine 2013, Little White Lies 2006) and written by Mark Huckerby (Peter Rabbit 2012, Howl 2015) as well as Nick Ostler (Peter Rabbit 2012, Howl 2015). 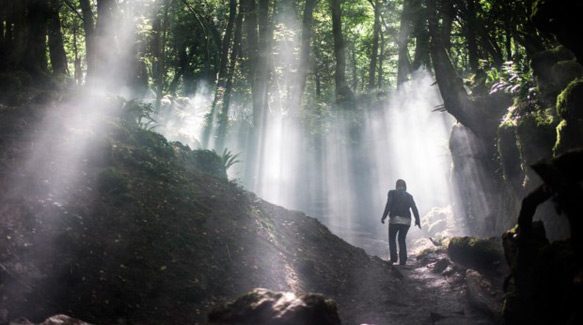 Compelling by the title alone, the cast includes Lucy Boynton (Sing Street 2016, Ballet Shoes 2007) as the troubled youth, Chloe; Katee Sackoff (Battlestar Galactica Series, Oculus 2013) as the remorseful mother, Jess; Javier Botet (Mama 2013, [Rec] 2007) as the wicked demon; Nick Moran (Harry Potter and the Deathly Hallows 1&2 2010/2011, Lock, Stock and Two Smoking Barrels 1998) as the inquiring Detective Boardman; Richard Mylan (Immortality 1998, The Upside of Anger 2005) as the workaholic husband, Ben; Jordan Bolger (Peaky Blinders series, The Habit of Beauty 2016) as the supportive best friend, Danny; Pooneh Hajimohammadi (The Machine 2013, Words with Gods 2014) as the artistic muse, Tira; and Callum Griffiths (The Bastard Executioner series) as the missing boy, Michael. A strong mix of talents, all of the actors/actresses came together with exceptional performances, giving life to their characters in this terrifying tale.

All begins with an introduction that is sure to initiate fear within the viewer, and suggests that the movie will be centered on the demonic and evil forces. This is done by the use of menacing music; burning doors; repeatedly close shots of a satanic-looking goat head door knocker; and a fire burning through what appears to be etchings, only to reveal horrific scenes of satanic sacrifices to some kind of demon as it burns.

This in mind, the story revolves around a regretful, recovering drug addict named Jess (Sackoff), who is trying to repair the damaged relationship she has with her daughter, Chloe (Boynton), after giving her up nine years prior. Jess and her husband, Ben (Mylan), are seen speaking with what appears to be a social worker, discussing the possibility of Chloe returning home with them. Chloe is less than willing to give her mother the opportunity to make amends though, or right wrongs she had committed nearly a decade ago. Chloe is bitter and angry that her mother gave her up because she could not control her own drug addiction, and she vehemently declines her mother’s request to return home with her and tells her to “never come back.”

Jess is a famed sculptor now that she has kicked the drug habit, and is seen in her studio working on a sculpture of a mother holding her baby inspired by her muse and model, Tira (Hajimohammadi), and her infant daughter. The frustration of her own strained relationship with her daughter makes it difficult for Jess to connect with the piece she is working on, so she and Tira call it a day and reschedule for another time. 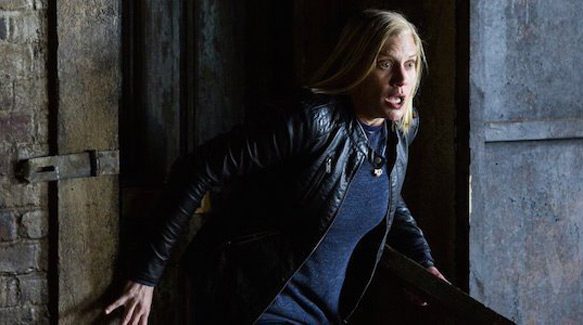 Chloe tries to blow off a little steam by spending time with, and venting to her best friend, Danny (Bolger); who, like Chloe, led a less than desirable life himself. They see a few kids off in the distance playing a game of ding-dong-ditch, or knock-down-ginger as it is referred to in the UK. Danny then takes Chloe to this dilapidated, broken-down two story house in the middle of a small clearing that is surrounded by seemingly well-traveled roads, a place that gives viewers the impression that she knows this house and is utterly frightened by it.

They recount the story of their missing friend, Michael (Griffiths), who disappeared after daring to knock twice on the door of Mary, or “Ginger,” as they called her. Danny and Chloe then bravely approach the door and give it a couple of knocks using the creepy goat head knocker before abruptly leaving to return home, reassuring themselves that the supposed demon inhabiting the place is nothing more than just an urban legend.

Eventually, when the demon proves to be more than legend, Chloe fears for her life and decides to move in with her mother in an attempt to escape, or be rescued from, the malevolent force that is after her. After both women begin to experience strange and unusual occurrences in the form of terrifying hallucinations, violent dreams, disembodied voices and wails, as well as sinister shadows, they enlist the help of Tira, who seems to have some understanding of what they may actually be dealing with, as well as Detective Boardman (Moran), who worked on the case when Michael first went missing. Together, Jess, Chloe, and the detective work to solve the mystery surrounding Michael’s disappearance in order to save Chloe before the evil devours her as it had done to so many before her.

Complemented by many factors, the cinematography in Don’t Knock Twice was brilliantly handled by Adam Frisch (The Apology 2016, Shank 2010). Frisch evokes immersion with the use of multiple long shots of Jess’ enormous home and property, indicating it was at first a safe haven by making the scene appear peaceful and brightly lit by the sun. The level of security the home provides eventually changes as the scenery does, becoming darker and more ominous as the story progresses and the demon closes in. 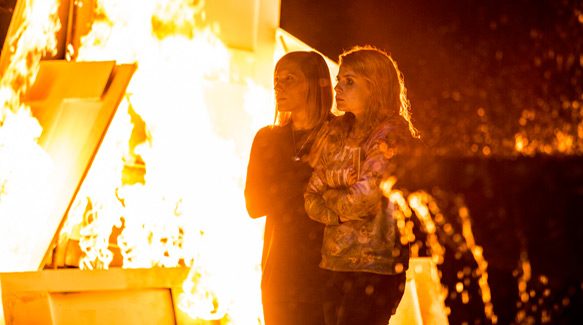 Doors are a prevalent symbol in this film, as they remain illuminated while surrounded by darkness, which builds anticipation as it indicates the demon is lurking within such evil territory. There are also more subtle symbols which allow viewers to appreciate the bigger picture, if only they are paying close enough attention; as red is often depicted to denote the persevering evil force, and the use of mirrors to reflect a character’s demons within.

The special effects used to portray the demon closely resemble those used to depict “Mama” in the Horror film sharing the same name. The contorted way the demon moves and shape-shifts make the hairs on your neck raise. Everything the demon does is with purpose and done so in a manner which draws out the fear for as long as possible. There are also some skillfully timed jump scares that will have your heart pounding out of your chest, in addition to twists and turns that viewers are not quite prepared for.

Aside from the visually frightening, the film score created by James Edward Baker (Heist 2015, Weekend 2011) and Zombi’s Steve Moore (The Guest 2014, V/H/S/2 2013) perfectly complemented the creepy, spine-chilling imagery in every way.

Building such suspense, viewers will be chewing their nails in anticipation of the horror that will soon follow. Don’t Knock Twice encompasses all of the necessary elements to make this an outstanding Horror film that almost anyone would enjoy, which is why CrypticRock gives this movie 4 out of 5 stars. 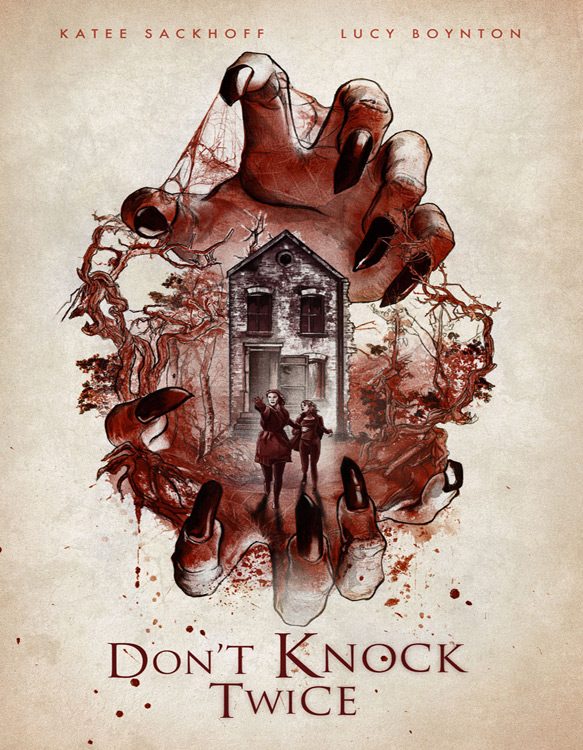