If you live music, if you breathe art, if that certain spark in your eyes is connected to anything instrumental, you understand the hardships inherent in the life of a DIY touring musician where absolutely nothing is ever guaranteed – every day you drive, some days you play, and hopefully, occasionally, you sleep. Oh, and eat! Eating is nice! Drive. Play. Sleep. is a new Music Documentary that arrived to DVD and Digital HD on November 7, 2017 that is, like its creators’ music, independently-released with the help of its producer, Kyle Prohaska. An embrace of the lives of independent touring musicians that shares the highest of highs and the lowest of lows, this is a must see for anyone in a DIY band or anyone who breathes music. 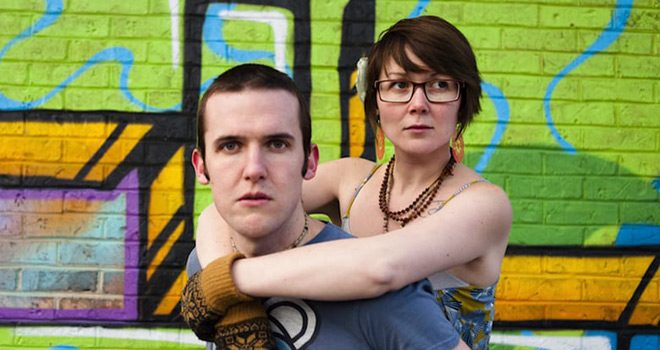 Drive. Play. Sleep. is, first and foremost, the story of Pocket Vinyl, an independent, touring duo with four albums and several EPs to their credit. Comprised of married couple Eric Stevenson and Elizabeth Jancewicz, Pocket Vinyl place Eric on vocals and piano – holding down the musical fort, so to speak – while Elizabeth paints one-of-a-kind artistic creations during each performance that are auctioned off at the end of the night. Self-described “piano slam rock,” consider them a kind of Ben Folds with performance art sewn in, creating something that is aurally and visually stunning.

Married and touring for the past six years, this creative couple have played some 600+ shows throughout that time, with 138 of their performances occurring in the year that this documentary was filmed. In fact, the only continental U.S. states that have not seen a Pocket Vinyl performance are Nevada and Wyoming. That is a lot of mileage, painting, and song, my friends!

What this Documentary entails is an honest, unscripted and fair view of the lives of independent (no management, no booking agents, no merchandise people, no road crew, no frills!), touring musicians throughout the U.S.

For one year, Pocket Vinyl brought along a video camera to capture all facets of their lives on the road, and this unfiltered view through the eyes of the DIY musician covers a multitude of topics, from booking gigs to getting paid, surviving on the actual road (expenses, accommodations and food) to endless car troubles. They even discuss sexism throughout the industry, with many a female musician being mistaken for a merch girl or, worse yet, groupie. At all times, both Eric and Elizabeth are candid, honest, sincere, with Eric oft wearing his heart completely on his sleeve. As such, there are moments where, exhausted and teary-eyed, we see that being on tour is not glitz and glamour, but rather emotional hardship and physical fortitude.

Clocking in at roughly 86 minutes, Drive. Play. Sleep. was shot with a cheap home video camera and absolutely no budget. Much like the bands and music that it lovingly and passionately portrays, it is a no-frills presentation that does not claim superior cinematography or marvelous costuming, no. What you can expect are candid interviews peppered throughout the on-the-road footage, with independent musicians such as Jordan Doyle and Christian Holliday of Gaffer Project; Chris Viner and Sasha Alcott of When Particles Collide; Singer-Songwriter Timothy Ezekiel Bell; Saxophonist/Keyboardist Isaac Young; Singer-Songwriter Erica Wolfling of Ice Dragon; Tim Duly of TIMISAROCKER; Wellz of The Bastards of Fate; James Maple; Philip Wells of White Collar Sideshow; Kyle Anthony of Secretest Crush; Singer-Songwriter Daniel Amedee; Singer-Songwriter Alex Mendenall; Songwriter Daphne Lee Martin; Kat Downs of Sit Kitty Sit; James Reza of Brother Rabbit and Junfalls; Grant Buell of My Oh My!, KC Bear Fighters, and Good Time Charley; Arren Alexander, Isaac Hecimovich and Aaron David of Owls, Foxes and Sebastian; Christopher Bemis; Sharone Borik of Sharone & The Wind; Hana Maria and Mishkin Fitzgerald of Birdeatsbaby; Kate Dedinsky and Adam Grindler of The Baker’s Basement; Singer-Songwriter Justin Golden; and Jonathan Stevens of Eleventyseven. 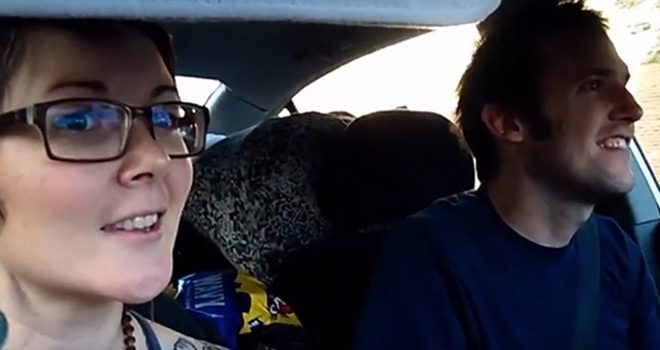 Throughout Drive. Play. Sleep. there are a bevy of moments that show the honest truth: life on-the-road is never easy. Some nights you perform for an audience of empty tables; some nights you sleep in a $47 hotel with cigarette-burnt sheets; and on other nights, you fight with ever fiber in your being not to fall asleep behind-the-wheel. Even Eric and Elizabeth’s parents express their thoughtful and fair concerns for the couple’s safety and financial stability.

Of course, there are positive, heart-warming moments too: like when Matt Sigai of DIY Galesburg, IL, discusses the emotional benefits of becoming involved in the DIY scene, a move which helped him to overcome anxiety and depression. Clearly there is a community across the U.S.A. of like-minded artists and individuals who, when they come together, can create beautiful things!

Despite always painting an honest picture (pun intended), Drive. Play. Sleep. is at all times hopeful. When you possess an unbridled passion for the art you create and truly love those around you, you cannot help but laugh through life’s minor tragedies.

Eric and Elizabeth are clear examples of this: they laugh merrily and seem to possess a killer, shared sense of humor that brings them through even the darkest of days. They are human, relatable, likeable even, authoring a story of their lives that is candid and sincere. When the Documentary initially begins, Eric is so straight-forward as to admit: “I don’t even know what success looks like.”

Of course any film about music must come with a stellar soundtrack, and Drive. Play. Sleep. delivers a collection of tracks that were donated for use by independent artists. The soundtrack, therefore, features the likes of Wes Aikens, Boxelders, Clotworthy, Fable Cry, Hanging Hills, James Maple, Daphne Lee Martin, Mental Health Day, Sharone & The Wind, Leroy Townes, When Particles Collide, and Erica Wolfling. Perhaps, after just one listen, you might just discover your next favorite artist?

In short, Drive. Play. Sleep. is a wonderful Documentary that never once feels forced, insincere or, sin of all sins, boring. Eric and Elizabeth sing bad Taylor Swift songs together while suffering car troubles; earnestly interview those that possess a passionate spark in their eyes; give an elated review of a $37 clean hotel room; and move through the country with a love for performance in everything they do. The result here is a must-see Documentary for anyone who lives or loves music, be it the basement singer-songwriter or the wannabe Warped Tour band still in high school. With an equal passion for all things artistic and musical, CrypticRock give Drive. Play. Sleep. 5 of 5 stars. 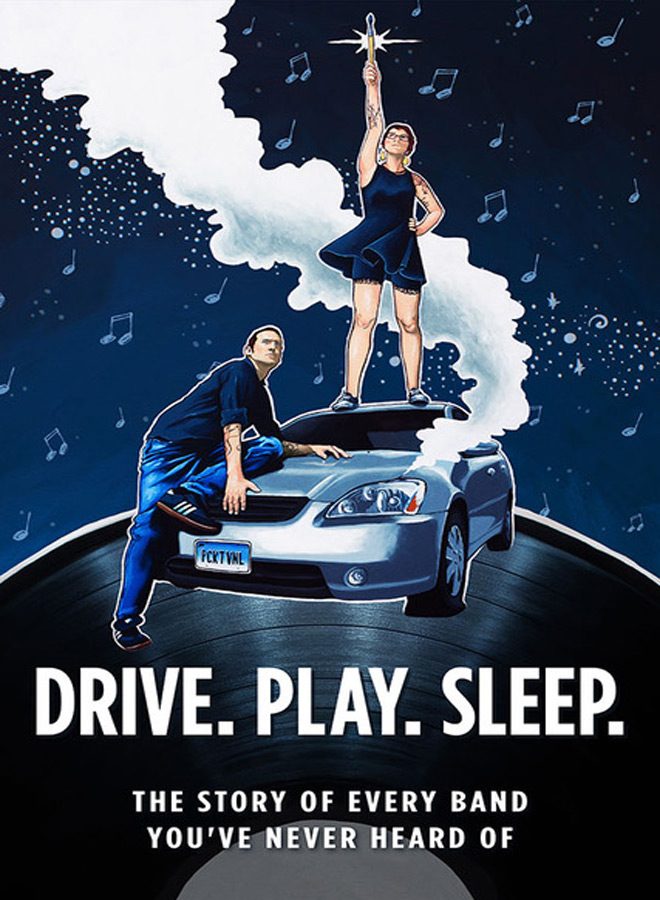