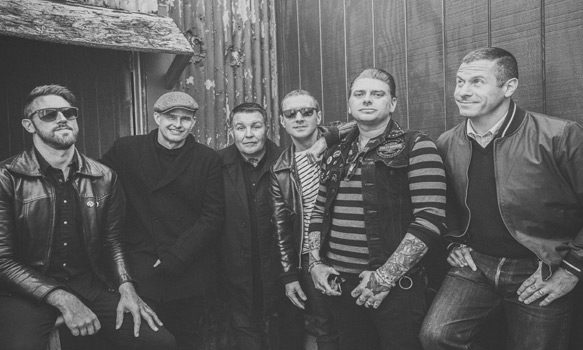 Kick back with a beer and let us discuss a little band from the bawdy streets of Boston, MA, the kings of Celtic Punk, Dropkick Murphys. A beloved bunch, the band returned on January 6th with 11 Short Stories of Pain & Glory, their first studio album since 2013’s Signed and Sealed in Blood.

Named for Dr. John “Dropkick” Murphy’s alcohol-detoxification facility, Dr. Murphy was a bizarre professional combination of wrestler and sanatorium-owner, who operated the Bellows Farm Sanatorium – which was known as “Dropkick Murphy’s” in Acton, MA. Thankfully, the band avoided confinement in the sanatorium, and instead got their start like so many bands before them, literally in a friend’s basement. Early influences for their music ranged from Swingin’ Utters, The Ramones, The Clash, and Sex Pistols, to The Pogues, and The Dubliners, as well as, believe it or not, AC/DC. Call them Punk, Celtic Punk, or Oi!. Their first big break came when The Mighty Mighty Bosstones selected them as the opening act for their 1997 tour and the rest is well-documented musical history.

Looking back, since the band’s inception in 1996, they have sold a staggering four million albums worldwide, and just one of their videos – “Rose Tattoo” from their eighth studio album, Signed and Sealed In Blood – has over 24 million views on YouTube. In fact, a version of the song – guest starring one of the band’s many friends, some guy called Bruce Springsteen – was released as a benefit for the Boston Marathon bombing victims. Bostonians through and through, the band have performed all throughout their hometown and at many of the city’s landmarks, including Fenway Park, TD Garden, and the Boston Pops. They even gave a special performance aboard the USS Constitution during its final voyage and in honor of the historic ship’s 217th birthday, partaken in charity work passionately, among many other things over the course of their career.

It is all so very impressive for a band that just turned twenty years-old in 2016. Their commitment to their community and the world community sets the band apart, as do their devout fanbase. That said, it is no shock that a band who give passion get it back in spades, and the Dropkick Murphys’ fans are some of the most dedicated. Attend a Vans Warped Tour performance and one will see the fan-flags literally unfurl in the sky as the band take to the stage, and a circle pit full of good, old-school Punk comradery is always present, as well.

Their ninth studio album, the aforementioned 11 Short Stories Of Pain & Glory, released via their own label, Born & Bred Records, is produced by Ted Hutt (Gaslight Anthem, Old Crow Medicine Show). Eleven songs in total, somewhat ironically, it was recorded in El Paso, Texas. Kicking off with “The Lonesome Boatman,” a great intro track full of gang vocals, tin whistle, guitars, and enough excitement to get your blood pumping for the first song, “Rebels With A Cause.” A song about the dead-end kids who are so easily written off as hopeless and left behind by the system, this band wants it to be known that someone believes in you. “Hey kid, you got heart,” it is a truly catchy track that could make a great single.

Released as the album’s first single in November 2016, “Blood” is a true Dropkick Murphys anthem replete with bagpipes, heavy guitars, and gritty vocals. “If you want blood we’ll give you some. Sing from the heart ’til the job is done,” the band promise enthusiastically. This is a song about sincerity, dedication, and having heart, not gore and gruesomeness. Then there is “Sandlot,” a humor-filled look back at the days of youth, while “First Class Loser” is that hook-filled, toe-tapping tune about that pain-in-the-anus that everyone all knows and loathes. The album’s third single, released in mid-December 2016, “Paying My Way” is a passionate plea not to count the recovering addict out. “Don’t count me out, I’m a survivor,” proclaim the band proudly in this tale of working your way back, out of addiction’s darkest depths. No matter the specifics of your personal struggle, this is a true anthem for survivors.

Those beginning to fear that Dropkick Murphys have grown too serious, here is a reminder that they still love their booze and brawls: an ode to Casey’s hat and a song about a golddigger. In “I Had A Hat,” you enter the bar and hang your hat on the rack. Well, that hat better still be there when you leave demands the band in this amusingly senseless number. A peaceful, loving man that wants his damned hat is followed up with a tale about a girl who has kicked you to the curb and taken all of your money, and your dog, too. “Kicked To The Curb” is a deliciously cruel break-up tale full of humor. It is their ability to intermingle passionate, personally deep tributes with comedy that keep Dropkick Murphys’ music fresh and thoroughly enjoyable.

An emotionally moving tribute to those dealing with addiction, particularly opiate addiction, is the second single for the album. Complete with bagpipes, guitars and gritty vocals, “You’ll Never Walk Alone” is, surprisingly, a Rodgers & Hammerstein tune that originally appeared in the musical Carousel. Dropkick Murphys’ take on the track is gritty but passionate, anthemic and full of hope. “Walk on with hope in your heart and you’ll never walk alone,” proclaims the chorus of this gripping memorial.

Equally touching is the beautiful tribute to those lost and injured on “4-15-13,” the date of the Boston Marathon Bombings. Dropkick Murphys’ beautifully haunting eulogy to those lost and injured that day is another emotional track, the band’s spin on a ballad. “We’re all just people trying to make it through another day,” they repeat throughout the song, with reminders that no matter where we fall in society – doctor, liar, thief, wife – we all deserve to see tomorrow. ” For all those gone but not forgotten, we remember you each day,” promise the band in this truly poignant homage.

With an apropos title, “Until the Next Time” is the album’s final track that feels like a chummy adieu from the band. Not to start rumors of a hiatus, but lyrically (“Good luck be with you. You go your way and I’ll go mine.”) there is a certain attitude of, well, hasta la vista, baby. Whatever the case, the song marks the perfect conclusion of a phenomenal, deeply moving musical offering.

For fans, the limited 5,000 copy run of the deluxe edition of the album includes a 26-page booklet featuring hand-written lyrics, photographs, guitar tabs, bagpipe notations, and a 2 song picture disc featuring “Blood,” as well as an acoustic version of “Sandlot.” Also, to coincide with the release of 11 Short Stories Of Pain & Glory, the band will embark on a winter tour beginning in late February in Bethlehem, Pennsylvania, and ending with five dates in their beloved Boston, for Saint Patrick’s Day celebrations and imbibitions.

What make Dropkick Murphys such a beloved band – in Boston and beyond – is their commitment to intelligent lyrics that dig deeper than the usual love and relationship talk: they are a band who can discuss drug addiction and a horrific bombing, all while sharing their beer and keeping hope alive. It is the band’s ability to put a smile on listener’s face while discussing the harder-hitting issues that keeps them beloved in an often-times schizophrenic modern Punk scene.

Dropkick Murphys provide the very best of what is classic, blend it with the present, and add their own Celtic pizzazz to make stellar music. Whether they are paying sincere, heartfelt tribute to fallen heroes or demanding listeners give their hats back, they are inspiring and genuine. For this reason and about ten billion reasons more, CrypticRock gives 11 Short Stories Of Pain & Glory 5 out of 5 stars. 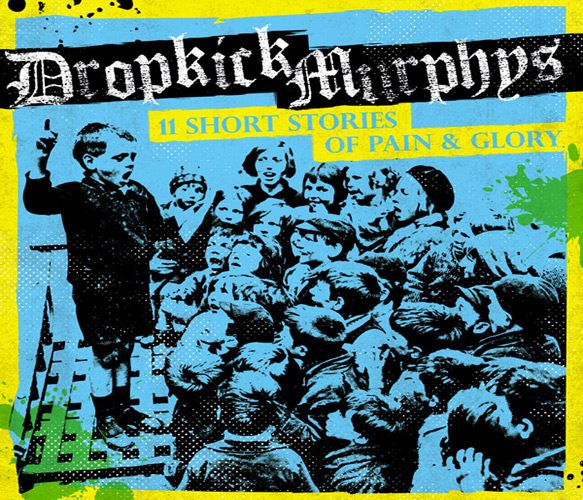