Every once in awhile, a movie comes along that stimulates the senses as well as warms the heart. An unlikely candidate, Steven Spielberg’s E.T. the Extra-Terrestrial burst into theaters in the summer of 1982, going on to becoming the one of the highest grossing movies of ever. 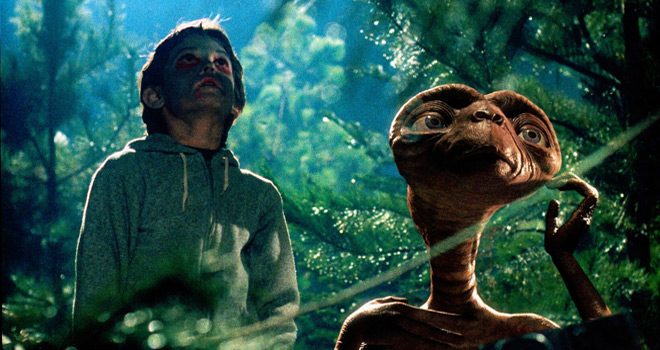 Released on June 11th of 1982 via Universal Studios, now celebrating its 35th anniversary, E.T. the Extra-Terrestrial continues to magnetically draw new devout fans as both parents and grandparents hand over this cherished must-see movie for the young fry to mentally digest and enjoy!

Admittedly, this thirty-something movie has such a heart-gripping quality to it. A Science Fiction Fantasy, it was the brainchild of none other than the aforementioned Steven Spielberg. To the great surprise of all, the movie grossed a whopping 792.9 million greenbacks during its opening weekend. Assuredly, there were fist-pumps in the air with intermittent celebratory whoops all around by those involved in this cinematic project once news of its financial success was made public.

A standing ovation is warranted here for this champion-sized box office record remained unbeaten until 1993 when Spielberg’s own Jurassic Park stomped it down forcefully with a huge dino footprint and a T-Rex battle cry. Providing Spielberg with inspiration, the late Melissa Mathison (The Black Stallion 1979, Twilight Zone: The Movie 1983) created the screenplay for this unforgettable tale about an endearing pint-sized alien with two giant and very expressive eyes who just had the misfortune to be stranded on planet Earth with nothing more than his survival instincts and winsome personality. Little did she know that she helped created a meteoric blockbuster, a lasting impression for children of the ’80s, and a new merchandise franchise. 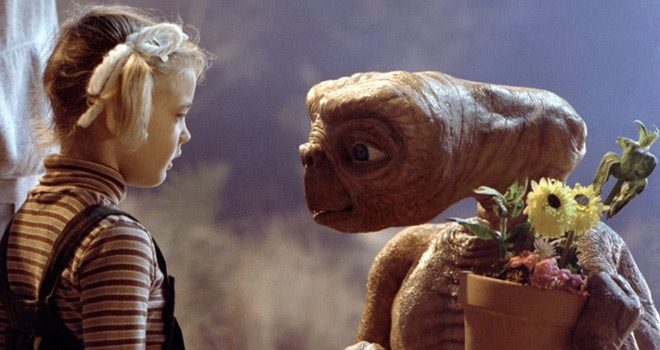 Speaking of which, within weeks, the adorable, odd shaped alien was emblazoned on shirts, immortalized in figurines, plush toys, and there was even an animated talking doll to lull a sleepytot to sleep. Not to mention the numerous games that had his stamp of approval on. The only market niche left untouched was a Nike commercial. In short, E.T. was everywhere and even remained an amusement ride at Universal Studios in Orlando, Florida for over a decade under the title E.T. Adventure.

As far as the film, the unveiling of the story leaves one mesmerized and open-mouthed in disbelief. Once E.T. realizes that he is ‘shipwrecked’ he seeks refuge in a nearby shed and befriends a young, troubled little boy, Elliot (Henry Thomas: Fire in the Sky 1991, Ouija: Origin of Evil 2016). After an initial bewildering meet and greet alien encounter, Eliot lures the little alien to his home with a linear trail of Reese’s pieces. Who knew that this little alien would have had such a sweet tooth for peanut butter and chocolate candy? Quite understandably, untold quantities of bags containing Reese’s pieces went flying off the shelves for weeks after.

Of the many unforgettable aspects of the film, one memorable scene was when Eliot’s sister, Gertie (Drew Barrymore: Firestarter 1984, 50 First Dates 2004) happens to discover E.T. as she walks into his room and begins a purge of high pitched screams that is immediately reciprocated by E.T. and is quenched by the untimely arrival of their single mom, May (Dee Wallace: The Howling 1981, Cujo 1983). Hey, who can blame Gertie? It is not every day that you encounter face to face an alien being in your house. Gertie quickly gets over her fear and enlists E.T. as a model for her haute fashion runway and begins her internship as E.T.’s pre-school teacher. Gertie teaches him a few words and by the end of the day E.T. has mastered a toddler mouthful -E.T. phone home! You cannot get any clearer than that. 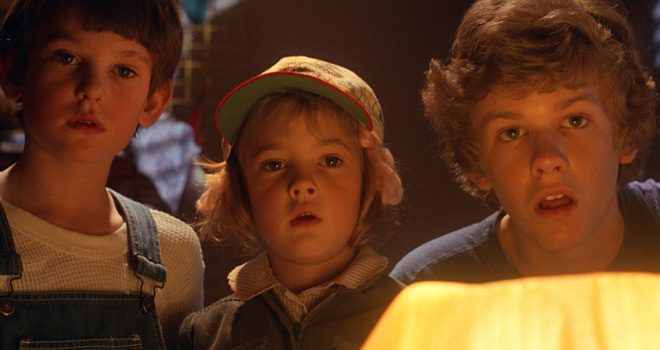 In the ensuing days, there are numerous adventures where Elliot and E.T. learn about each other and establish a psychic bond which provides some comic relief. We see that E.T has a sudsy taste as he opens a Coors beer and chugs it down. Eliot is also simultaneously experiencing E.T.’s state of inebriation which then filters into science class where all the frogs are set free and absolute havoc ensues. E.T. was successful in creating a galactic phone and made his call.

Alas, E.T. is being hunted down by the government as a specimen to be prodded and analyzed. Stealth preparations are underway to nab E.T. and make him a laboratory rat. The viewer feels a familial stirring of sympathy for this beloved creature as he is captured and support the covert action of the united effort of family and friends to rescue E.T. from his fate. A breath of relief is exhaled as the bikes are elevated in the air far away from the grasp of the government minions.

The galactic call was answered and E.T. was ready to rejoin his world. It was a heart-wrenching goodbye but E.T.’s glowing skeletal finger pointing to a glowing heart was such an emotional moment -no one went home dry-eyed.

Amidst everything that could be said about E.T. the Extra-Terrestrial, the fact is the film is filled with ingenious work, from the music of John Williams down to the acting of the entire cast. Of course Spielberg’s fingerprints are all over the film, adding his own unique touch to the look and feel. Funny enough, Film Star Dee Wallace offered up this challenge, “Don’t believe what you hear. Working with kids can make you a star! Of course, Steven Spielberg doesn’t hurt!” 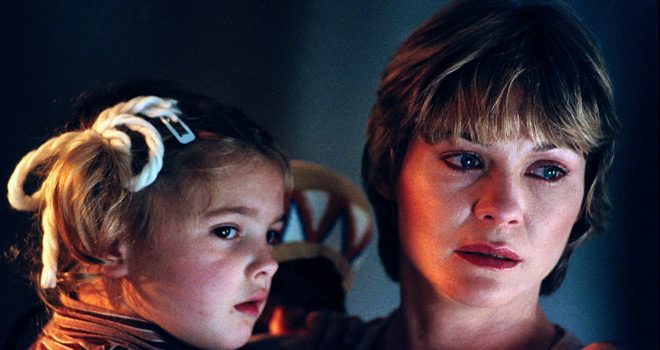 Nominated for a whopping list of awards, E.T. the Extra-Terrestrial, of it all, won 4 Academy Awards. Beyond being a Science Fiction film, of its many accolades, it has been dubbed one of the greatest movies of all-time. Not bad for a movie about a boy befriending an alien. Is it not more than just that though? It is about the power of love transcends all differences and transforms lives for the better. This is a sentiment that resonates in the hearts of a child, and hopefully reminds the more jaded adult. A movie that can be seen repeatedly, it continues to evoke an emotional response, then, now, and more than likely another 35 years from now. 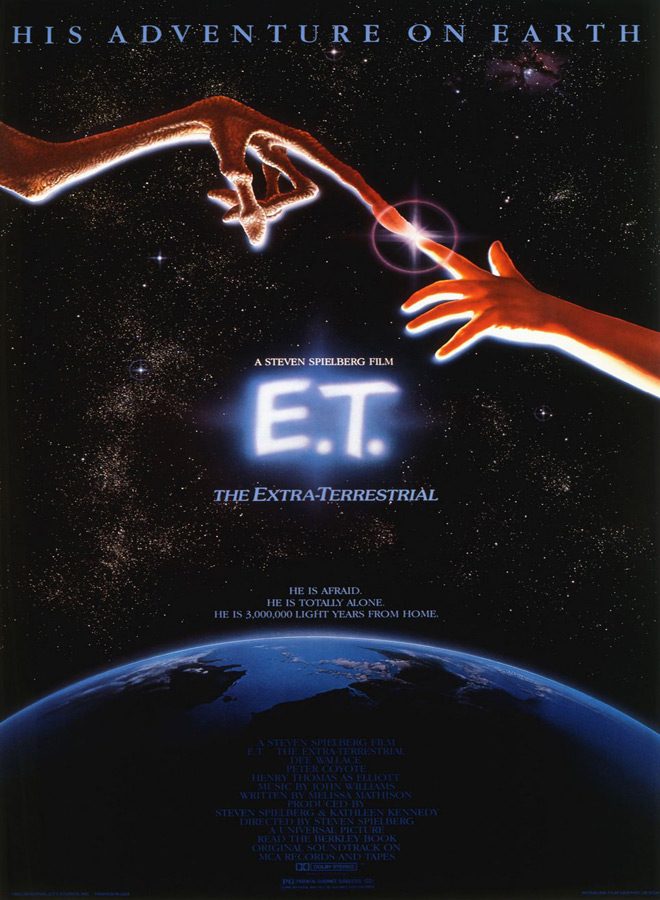