Eagle of Death Metal – I Love You All The Time: Live at The Olympia in Paris (Live DVD Review)

November 15, 2017 Eagle of Death Metal – I Love You All The Time: Live at The Olympia in Paris (Live DVD Review) 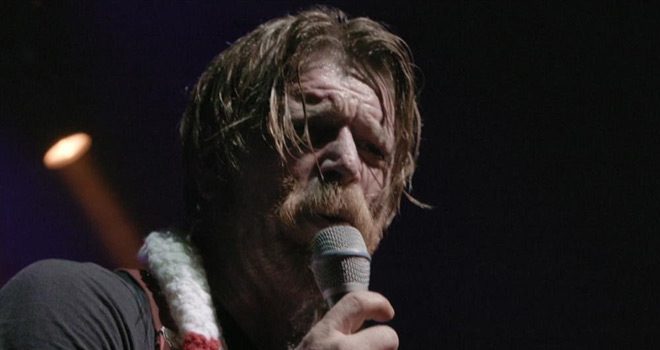 Their name may be deceiving, they are not The Eagles. Despite Guitarist Dave Catching’s big white beard, they are not bald eagles. Heck, they are not even a Death Metal band. Although, what Eagles of Death Metal are is 100% genuine! Together for nearly two decades now, the band has produced four quality studio albums and built a strong following while touring the world. Known for stellar live sets, wouldn’t it be great to capture that on tape to bring home with you? Well, Eagles of Death Metal have taken care of that wish with their latest live concert DVD, I Love You All The Time: Live at The Olympia in Paris.

Recorded on February 16th, 2016 in Paris, France, it was a show they had to play to help them move on, as well as their fans move on after an awful event. You see, three months earlier, while performing at The Bataclan in Paris on November 13, 2015, tragedy struck when the venue was raided by terrorists armed with guns and suicide vests, killing 89 people. This was one of a coordinated series of terrorist attacks on restaurants, cafes, and venues which left a total of 130 people dead and scores more injured.

This scarring event left many questions to be answers – are we safe to attend concerts anymore? When will the violence/terror end? Well, no one can predict the future, but all we can do is take it one day at a time. That in mind, Eagles of Death Metal were determined to make it up to the lovely people of Paris, and I Love You All the Time: Live at The Olympia in Paris captures the entire makeup show in a vivid fashion.

Released to DVD back on August 4, 2017 through Eagle Vision, I Love You All the Time: Live at The Olympia in Paris saw band founders Jesse Hughes and Josh Homme together on stage. For those unfamiliar, Homme seldom performs live with the Eagles of Death Metal due to his obligations with Queens of The Stone Age, but he was not going to miss this performance. Returning for the set was also the aforementioned Dave Catching, Bassist Matt McJunkins, second Drummer Julian Dorio, along with a keyboard appearance by Tuesday Cross and guest Guitarist Eden Galindo.

In addition to the band, 30 onsite counselors were on hand, the venue’s security was extremely tight, making it possibly the safest place in Paris that night. The band mindfully even omitted “Kiss the Devil” from the set, as it marks the moment when The Bataclan was attacked. Among the attendees for the makeup concert were some 900 survivors. Of course admission for these people and the victims’ families was free. It cannot be ignored though that many were still recovering from their physical injuries, while most struggled with mixed emotions and fearing they would panic and relive November 13th all over again. One concert goer, who was at both shows stated, “I cried during the entire first two songs…It was cathartic.”

With music to hopefully heal some of the pain, the band kicked off the set with “I Only Want You,” with every beat and chord delivered with raw emotion. Experiencing the concert, it is clear these guys would rather be nowhere else in the world that night. Following a brief moment of silence, Hughes declared, “I love you motherf**kers so much, you have no f**king idea.” Clearing fighting back overwhelming emotions, Hughes and the other members of the band put on an incredible live performance, one they will take with them the rest of their lives. Clearly broken to tears at points, they manage to celebrate life, love and unity, returning to “I Love You All The Time” throughout the set.

Eagles of Death Metal’s humorous nature absolutely helped calm nerves though. They even performed a reworded rendition of the Stealers Wheel song “Stuck in the Middle With You.” Later, Dorio relaxed as he flicked through a magazine, only something this band can pull off. Furthermore, the crowd certainly helped lighten the mood by spontaneously erupting into chants and cheers. Then, amidst it all, one of the many heartfelt moments was their cover of Duran Duran’s “Save a Prayer.” Shortly after the Paris attacks, a Facebook page was set up to encourage music fans to buy their cover of  “Save a Prayer” with all proceeds going to charity. Duran Duran Frontman Simon Le Bon even wrote on Twitter: “Duran Duran will donate all proceeds due to us, from this version. Considering options that are useful, peaceful & uniting.”

In enough words, this is a heavy experience when you understand the magnitude of it all. As far as the DVD itself goes, it is shot wonderfully. It is not overly cinematic, not overly raw, just right. Actually, it really draws you in as if you were there. Also available is a a 2 CD and digital video/audio version worth adding to your collection. You can see and feel the emotion through expressions on the faces of the sold out crowd. That in mind, Hughes is an incredible frontman who did a remarkable job uniting this crowd through the love of music. A must have for any Eagles of Death Metal fan or anyone simply looking for evidence that Rock-n-Roll unites, CrypticRock gives I Love You All The Time: Live at The Olympia in Paris 4.5 out of 5 stars. 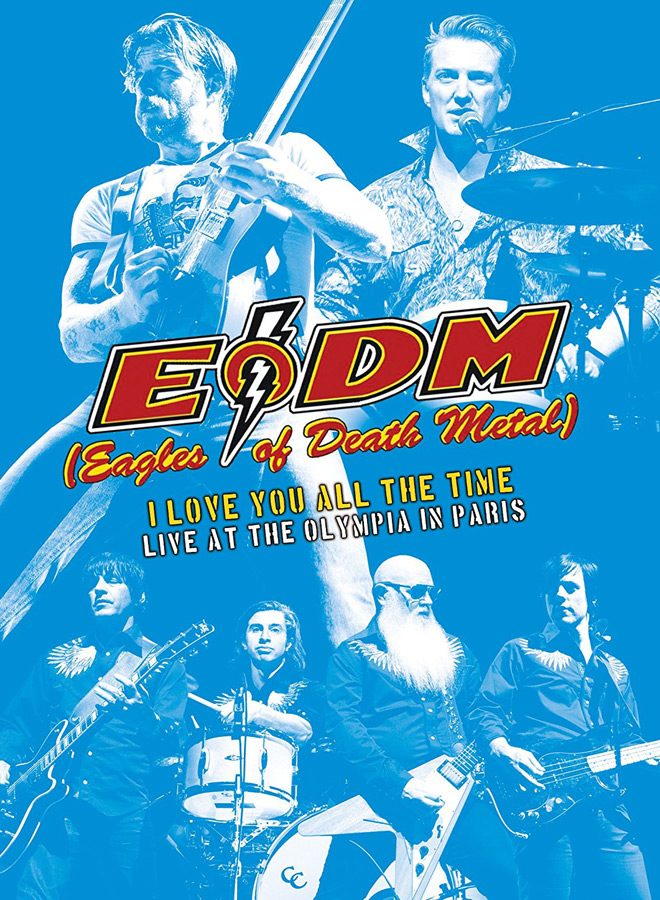 Purchase Love You All The Time: Live at The Olympia in Paris: