Edge of Tomorrow (also marketed as Live. Die. Repeat.) is a Science Fiction/Action film directed by Doug Liman (The Bourne Identity 2002) and based on Hiroshi Sakurazaka’s 2004 novel All You Need Is Kill. It was theatrically released on June 6, 2014. Edge of Tomorrow tells the story of a futuristic Europe which has been decimated by an alien invasion of beings known as “Mimics.” Nations across Europe have formed the United Defense Force (UDF) in response to this invasion, equipping its soldiers with battery-powered battle suits. 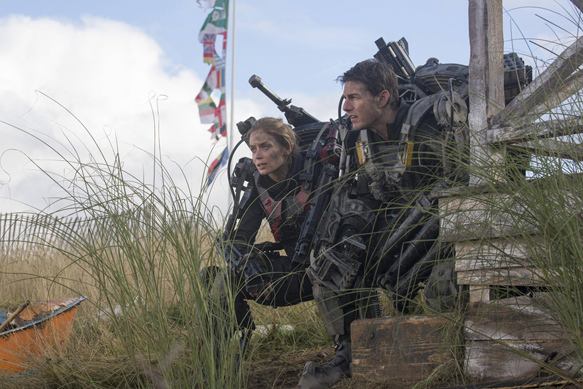 Tom Cruise (Minority Report 2002, Collateral 2004) stars as Major William Cage, a public relations officer in the UDF who has never actually been plunged into combat. He is summoned to UDF Headquarters in London where he encounters General Brigham (Brendan Gleeson- Braveheart 1995, Troy 2004). Brigham informs Cage that he is to be put into battle during the assault on the Mimics on the beaches of Northern France that is to occur the following day. Cage refuses and is arrested and put into service under the command of Master Sergeant Farrell (Bill Paxton- Aliens 1986, Near Dark 1987). The invasion of Northern France proves to be a complete disaster. Cage manages to kill one of the Mimics and has its blood sprayed on his face. He then dies but wakes up again at the training camp before the invasion. Upon being killed a few more times and realizing that he is stuck in a continuous time loop, he encounters Sergeant Rita Vrataski (Emily Blunt- The Wolfman 2010, Looper 2012). Rita informs Cage that she experienced the same exact thing in one of her prior battles and tells him to meet her the next time he is killed and wakes up. Cage and Rita soon both realize that through the Mimic’s blood, Cage has been given the power to reset the day every time he is killed; something which only certain types of Mimics called “Alphas” are capable of doing. It soon becomes up to Rita and Cage to discover and eliminate the Omega, which is the Mimics’ hive mind and the creature which physically resets the day. They go after the Omega in the hopes of turning the tide of the war. 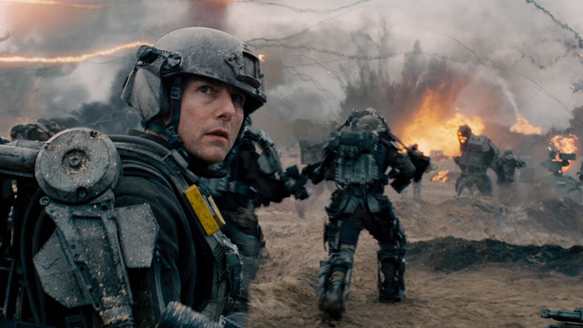 Edge of Tomorrow is a very unique, engaging, and refreshing experience which holds its place among the most entertaining blockbusters of 2014. The film is sharply written and directed. It is also well-acted and consistently engaging. Even after thirty years, Tom Cruise proves to stayl at the top of his game as an action hero. Edge of Tomorrow feels like the kind of summer blockbuster which can only be done with an actor like Tom Cruise in the lead role. Most actors would likely make the mistake of taking the script too seriously. Cruise, on the other hand, brings charisma to the role and has fun with it. It was also terrific to see Bill Paxton in another alien invasion type of film. He is perhaps best known for playing the cowardly Private Hudson in James Cameron’s Aliens (1986). It was a smart decision to cast a character actor who has experience with the genre.

It is not difficult to notice that the release date of Edge of Tomorrow was strategically placed on the 70th anniversary of D-Day; the event in which the Allied Powers stormed the beaches of Normandy while France was under Nazi occupation. Edge of Tomorrow is essentially a futuristic D-Day chock full of imagery akin to the battle. It is no coincidence that the battle sequences take place on the beaches of Northern France. World history being given a futuristic sci-fi twist is something which is not done very often in blockbuster filmmaking. This is another area in which Edge of Tomorrow excels. 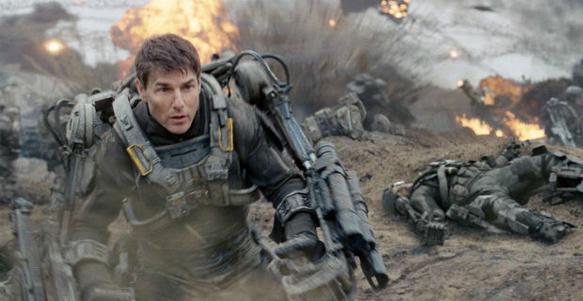 The battle sequences in Edge of Tomorrow are as hard-hitting as it gets, but there is also a solid script behind the action. This is something which is not accomplished too much in modern Hollywood blockbusters. The action is often put there in place of a script which is lacking in more than one area. This is not the case with Edge of Tomorrow. It is a brainy Sci-Fi blockbuster full of action and humor. CrypticRock gives Edge of Tomorrow 5 out of 5 stars. 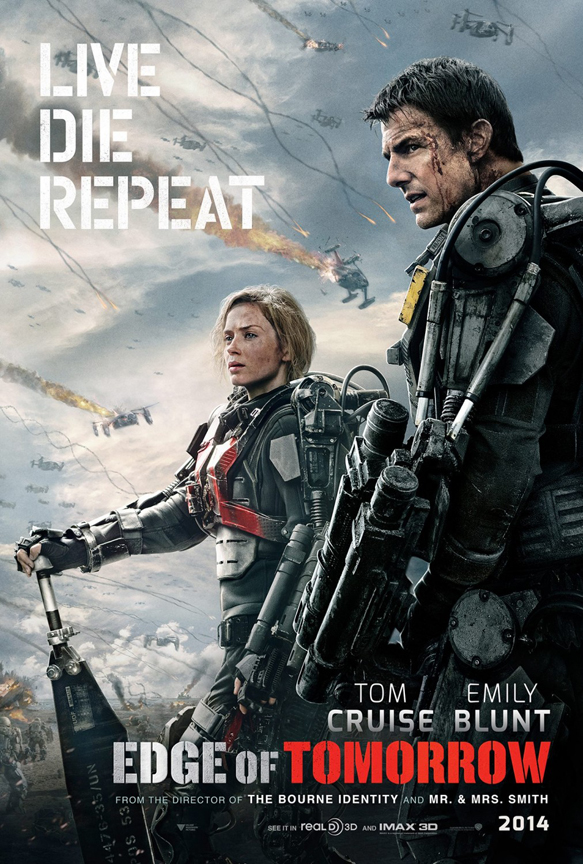 Purchase The Edge of Tomorrow on Blu-Ray/DVD on Amazon

Jungle Cruise (Movie Review) Old (Movie Review)
Like the in-depth, diverse coverage of Cryptic Rock? Help us in support to keep the magazine going strong for years to come with a small donation.