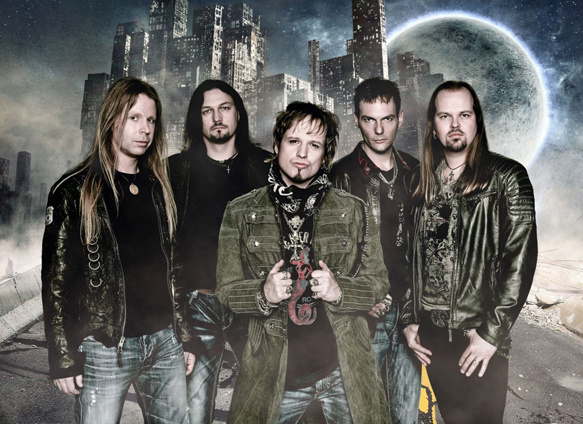 The German Power Metal band Edguy is back with a vengeance on their tenth studio album, Space Police – Defenders of the Crown released April 18, 2014 via Nuclear Blast records. Prior to the release, frontman Tobias Sammet promised his fans on his Twitter account that this will be their heaviest album to date. Sammet collaborated with producer Sascha Paeth and the rest of the band: Jens Ludwig (lead guitar), Dirk Sauer (rhythm guitar), Tobias Exxel (bass) and Felix Bohnke (drums), to record and make his said promise a hopeful reality. The last few years especially with Tinnitus Sanctus (2008) and Age of the Joker (2011) only led one to question if they would become as powerful and edgy as they once were on earlier works such as Kingdom of Madness (1997) and Vain Glory Opera (1998). Edguy started out as a passionate and crazy group of kids that wanted to define a new transcendental form of Power Metal.  Their originality brought them to sell millions of records within Top Ten lists on charts, making them one of the most successful Metal acts in Germany.  While the title of their latest album may not exactly scream out Metal, one should never judge a book by its cover, or in this case name. The story goes, the band could not decide on choosing one of the names so they picked both.  The animated artwork alone proves that nothing should be taken too seriously, especially when it comes from Edguy.

Space Police – Defenders of the Crown is engaging right from the very beginning with “Sabre & Torch,” reminding the listeners on who these German metalheads really are. The mystical songwriting of theirs are back along with the swanky and riveting melody. The next track which is also the co-title of the album, “Space Police” comes soothing in at a slower pace along with a funkier keyboard riff. Edguy reveals their kooky selves in this catchy and innovative metaphorical piece. The songwriting is excellent which makes this one of the best from the album, with phrases such as, “your visions caught speeding. By free spirits that you recognize by the look. Spacetrotting dissident freedom police. Contrarians by the book. Freedom and wisdom they guard by outside. Stars and infinity shaking their heads at the force.” Listeners are reminded that humorous writing can come across just as heavy as any other serious and melancholy pieces. “Defenders of the Crown” marches in next with its vigorous guitar riffs and showcases Power Metal at its finest. The medievalesque humming and chanting mixed with the prodigious guitar solo work is the ultimate highlight. Next, “Love Tyger” takes the audience into an ’80s Glam Rock flashback with its arena sappy nostalgic choruses which is quite enjoyable. The guitar riffs and production quality redefines this track along with its youthful energy and uplifting vibrance. The ’80s style continues onward with “The Realms of Baba Yaga.” This one, however, is mixed with Edguy’s lack of subtle use of metaphors which is all about giving into temptation that spirals out of control.

The biggest surprise comes in their cover of the Austrian singer Falco’s classic New Wave song, “Rock Me Amadeus.” This exceptional rendition is the first revelation to Sammet’s rapping abilities and vocals in his German native tongue. Only Edguy can turn Pop into Power Metal and a hysterical masterpiece. Never judge a song by Edguy by their song title and “Do Me Like a Cavemen” is a pure example. It is a great track with storytelling lyrics and consistent use of folklore.  Topping it off, Ludwig incorporates a compelling guitar solo which would make a great edition to see live.

Towards the closing of the album, there is the ballad and not so humorous piece, “Alone in Myself.” Many metalhead listeners can relate to this one since it is all about being misunderstood in this world and whom wind up getting lost in translation. The mood of doom and gloom continues with its closing track, ”The Eternal Wayfarer.” This epic piece is the longest running at just under nine minutes. Sammet’s journey to find the truth behind eternity is written out beautifully; “I look up in search of forever and wonder. Trying to make out that day. That I had to give my inherent spiritual juvenility away and again: Why is it made so difficult for us to read the signs that we have to read in order just to understand. Read so we can comprehend a trace of eternity.” The instrumentals sync in pure unity along with another great guitar solo from Ludwig. The chorus is enchanting and follows up to a strong closing of the album.

Edguy leads their listeners into a world of exploration and a fearless attitude that may not work out if it came from any other artist. Their style has changed throughout the years, and with Space Police – Defenders of the Crown, a balance between their zealous powerful energy and traditional Hard Rock melodies have evolved.  The album sets its tone that brings back Edguy’s youthful spirited energy from their High School days and mixes with who they are now; heavier, unique, and slightly traditional Hard Rockers. Sammet’s humor remains throughout each track of this album.  The recipe includes oddball titles, slapstick, careless humor, and ’80s flashbacks that only Edguy can pull off. CrypticRock gives Space Police – Defenders of the Crown 4 out of 5 stars. 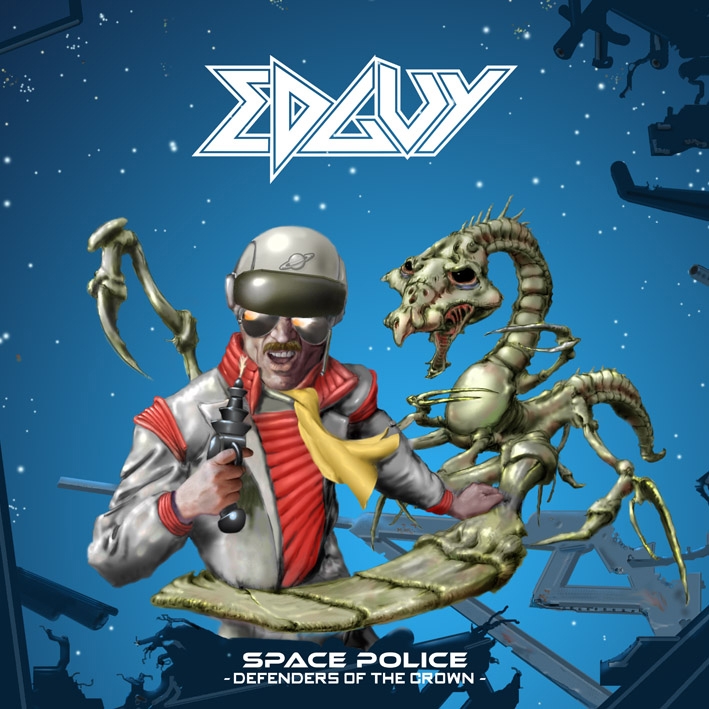