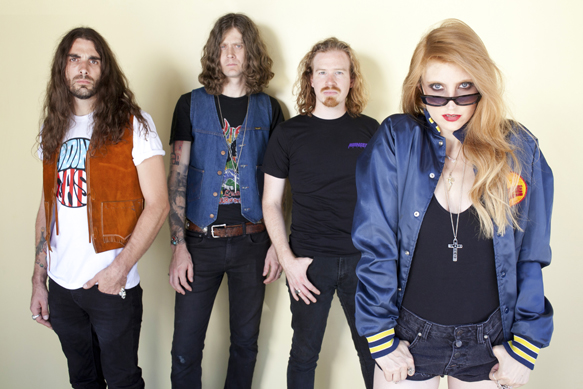 Back in 2014, the Rock world was taken by storm when Cincinnati, Ohio based Heavy Rock band Electric Citizen released their debut album, Sateen. From hell’s bowels, Electric Citizen consists of Laura Dolan on vocals, her husband Ross Dolan on guitar, Randy Proctor on bass, and Nate Wagner on drums. A massive impression, Sateen was a 10-track introduction to the darkness through their eyes with heavy shades of legendary Black Sabbath. They continued to pay their dues and hone their sound touring with the likes of Fu Manchu, Wolfmother, Budos Band, and Pentagram. Now in 2016, they return to dominate with their follow-up, Higher Time, which was released May, Friday the 13th.

Higher Time is a 10-song celebration of gloomy Rock, recorded at the Diamonds Studio in Cincinnati, like Sateen, and produced by Brian Olive (The Greenhornes, Dan Auerbach) again with mixing by Collin Dupuis (Black Keys) at Easy Eye in Nashville, Tennessee. Released via RidingEasy Records, the album dives into the abyss with the opening track “Evil,” with a brooding guitar intro before Laura’s vocals come in strong. There is a driving beat to this ’70s styled piece, showcasing the organs with a nod to “Iron Man” in the final act. Next, “Social Phobia” continues the forward trajectory set by the opening track with a choppy riff as Laura’s vocals dominate. Her bravado can take any male vocalist to task as she belts effortlessly.

Three tracks in, “Misery Keeper” starts with a bluesy vibe that carries throughout, even as the track quickens as the song seems to play of the old adage that misery likes company, while Ross’s guitar solos are classic fun. Moving on to “Devils In Passing Time,” a heavy Funk melody comes on as a hard guitar and bass riff leads with accompaniment by Wagner’s drums in tandem that follows the whole of the song. There is a sadness to Laura’s lyric delivery as she sings, “We were only passing time./You won’t remember me.” Coming in hard, “Golden Mean” has an anthemic flavor that makes for good fist-pumping as the drums drive the piece followed by the guitars, and, of course, Laura’s vocals have cold venom sounding like a classic Ozzy Osbourne. The album’s title track, “Higher Time,” almost comes in timidly as it slowly materializes on a slight distortion. There is an urgency to the tune within the psychedelic realm as Laura sings of wanting to get to a better place.

Following next is “Ghost of Me,” which is a rocker in sharp contrast to the previous track with its heavily-driven drums that lends itself to easy headbanging and grinding guitars while Laura’s vocals take on an otherworldly tone. A bit slower, but no less hard, “Natural Law” comes in on another anthemic vibe with the drums doing double time by song’s end while the guitars build, and Laura sings about wasting away, going by being sheep to society. Broodingly, “Crux” has a warning tone to Laura’s vocals as she sings about visions in the stars she saw about a guy. There is a repetition to the melody that could be symbolic of how fate comes around to fulfill itself. Finishing out Higher Time, “Two Hearted Woman” is a riff-driven opus that plays measured like the woman Laura sings about. In the end of the last act, the song slows to a crawl, then, as the woman seems to go crazy, the melody speeds exponentially to the abrupt end.

With their sound firmly set to pay homage to an era they grew up listening to, Electric Citizen has come out swinging for the fences with their sophomore album, Higher Time, with vocals strong and full of feeling as well as melodies that are classic in flavor, yet modern in delivery. CrypticRock gives Higher Time 5 out of 5 stars. 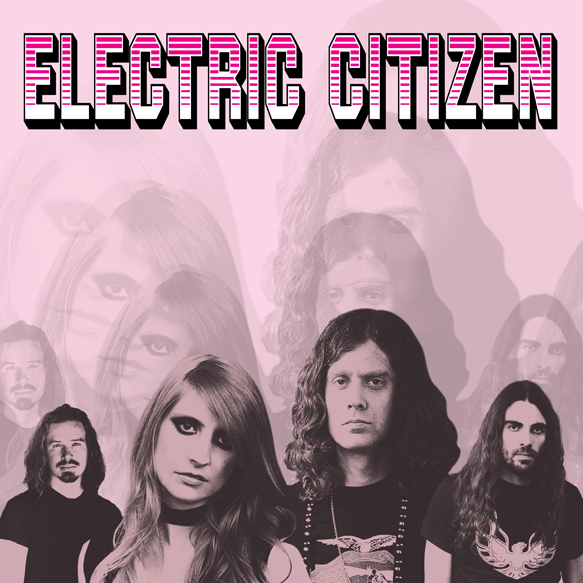