Who does not love a film that keeps one’s self at the edge of their seat? Directed and written by Guillermo Amoedo (Aftershock 2012) and produced by Eli Roth (Cabin Fever 2002, Hostel 2005), the unique Supernatural Thriller The Stranger does just that. Adding to the creativity of the film, music is provided by Manuel Riveiro (Aftershock 2012, Knock Knock 2015) along with outstanding special effects by Lorena Molina (The Goatherd 2009, Mandrill 2009), The Stranger stars Cristobal Tapia Montt (Humanimal 2010, Videoclub 2013), Nicolás Durán (Fuerzas Especiales 2014), Lorenza Izzo (Aftershock 2012, Knock Knock 2015), Luis Gnecco (Aurora 2014, Prófugos 2011-2013), and Ariel Levy (Promedio Rojo 2004, Aftershock 2012). Initially premiered on September 19, 2014 at the Fantastic Fest Film Festival in Austin, Texas, now The Stranger is ready to reach the masses on June 12th when it opens in theaters and is released On Demand. 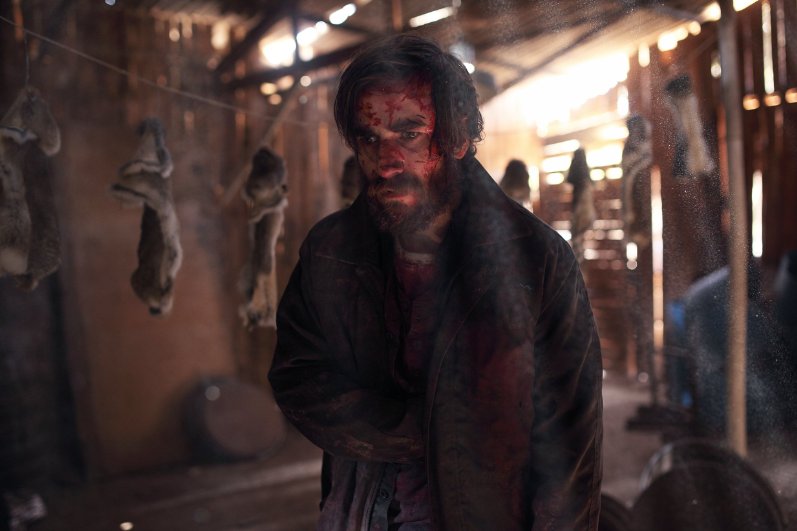 The Stranger starts out with a mysterious man, Martin (Montt) who arrives in town looking for his wife, Ana (Izzo). He arrives in the middle of the night at a familiar house asking for her. A boy named Peter (Durán) answers and tells him he can find her at the cemetery. Distraught by the loss of his wife and past, he embraces death when it arrives at his footsteps. A group of bullies beat him up and stab him deeply. Peter witnesses this crime and searches for help. He finds Lieutenant De Luca (Gnecco) on duty and tells him where the incident had happened. When the cop arrives on the scene, the man is not breathing and appears to be dead. Unfortunately, the cop is the father of Caleb (Levy), the main bully, and decides to cover up the crime by burying the dead man out in the middle of nowhere. Peter follows the dirty cop but he gets interrupted by an emergency and decides to finish the job in the morning. Peter takes advantage of the situation and carries Martin home on a support system attached to his bike, as he now appears to be alive. He seeks out the help of his nurse Mom to heal the wounds. Martin refuses any help and screams, “Don’t touch my blood, it’s infected!” In the morning, Lieutenant De Luca arrives at the scene to find Martin gone and assumes Peter must be involved, so he brings him in for questioning. He tells his son to stay away, but as per usual, Caleb does not listen. He and his friends hunt Peter down and beat him up. 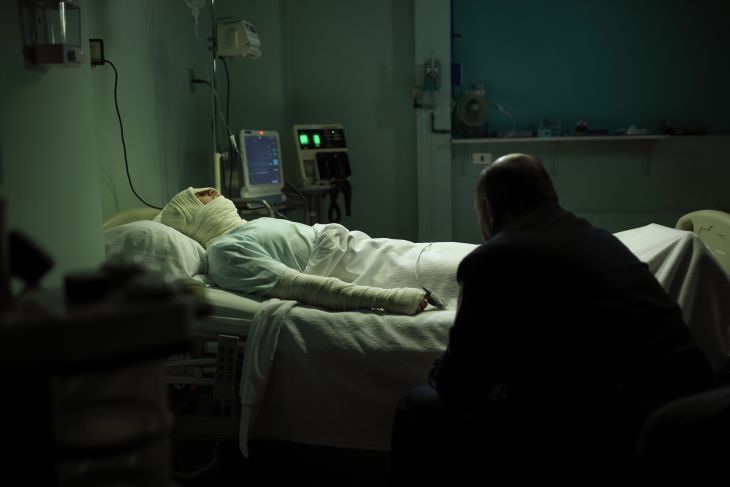 Martin sees this happening and lights them on fire, causing two of the boys to die and Caleb to have severe and most likely fatal injuries. In response to his son’s situation, Officer Harris starts drinking, which makes him want to seek out revenge on Peter while also trying to find out any information he may have on this mysterious stranger. When Peter does not give him the information he wants, the cop burns the boy’s face and parts of his body. Martin sees this and rescues Peter from the situation, where he brings the kid back to his house and puts his blood on Peter’s wounds, explaining that this will save him from dying. Peter’s mother is freaked about the situation and calls 911, screaming at Martin to leave them alone. Peter survives the night and in the morning his wounds are almost completely healed. But how is this possible? This sets the tone of the rest of the film. Who is this mysterious man? What is he? 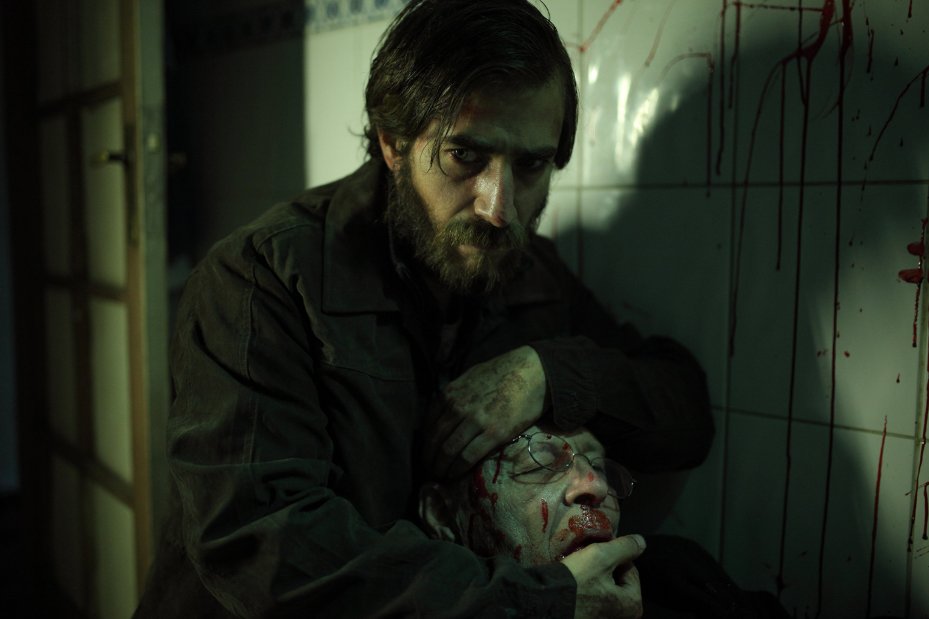 The Stranger, from beginning to end, leaves the audience anticipating what will happen next to the characters, what is really going on in this crazy town, what these people are, what do certain symbols mean, and who can be trusted? This is not a typical “stranger” comes into town story. The story will have many not only wondering about this man, but everyone else in town and what their motives are. Roth produced a unique modern day infection story, and even after it is over, the gears keep turning inside one’s head. This film is tame compared to some of Roth’s other movies, so not only will it grab the interest of his recent audiences, but will gain many more followers. Although infection stories are common, The Stranger was beautifully written and filmed, and captured how people react in unfamiliar, tragic situations. CrypticRock gives The Stranger 5 out of 5 stars. 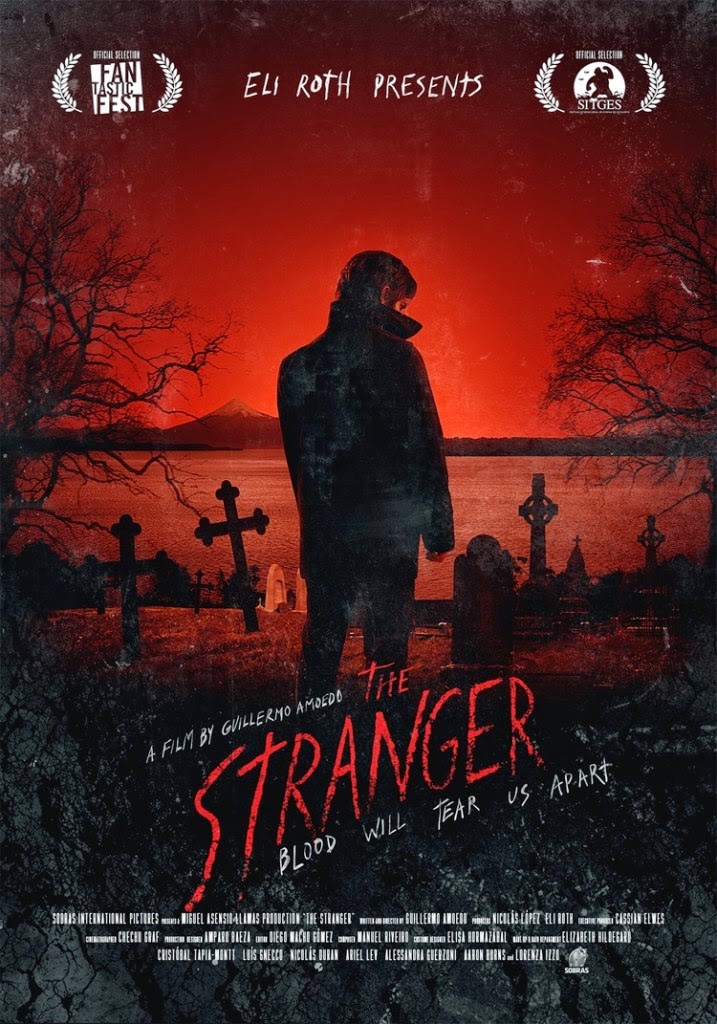