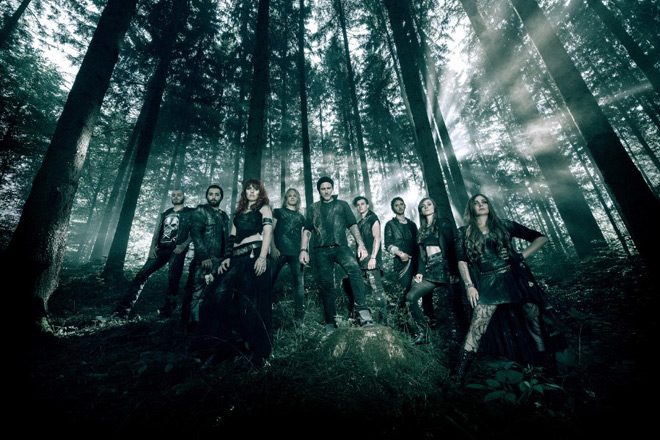 The appreciation of music written in foreign languages is not an art practiced or comprehended by all. Although, if really broken down, music is a universal form of communication, therefore the dialect sung merely becomes another instrumentation in the orchestration. So why close one’s mind when the emotional level of the music is equivalent regardless? This all in mind, Switzerland’s Eluveitie expresses a unique, beautiful culture in their music, crossing melodic Death and Folk Metal while enhancing the listening experience with traditional instruments as well as singing in the ancient language of Gualish. Compelled yet?

Led by Chrigel Glanzmann in 2003, Eluveitie is a tribe with many fluctuating members over the years, but they are now complete with a new lineup while primarily utilizing their newest member, Fabienne Erni, as lead vocalist. A total of a nine piece band, Glanzmann, is joined by Bassist Kay Brem, Guitarist Rafael Salzmann, Violinist Nicole Ansperger, Multi Instrumentalist Matteo Sisti, Drummer Alain Ackermann, Hurdy-Gurdy Player Michalina Malisz, along with Guitarists Rafael Salzmann and Jonas Wolf. Together with the aforementioned Erni they bring fans their latest album entitled Evocation II-Pantheon on August 18, 2017 via Nuclear Blast Records.

Featuring this overhauled team, their seventh studio album is quite opposite in flavor than their early days, which was a much heavier melodic Death Metal vibe overall. A progression over time, Evocation II-Pantheon is very Folk oriented and quite traditional, but beautiful nonetheless, with the peacefully serene vocals, violin, hurdy-gurdy, as well as plenty of flute to warm hearts. It does not even necessarily fit into a Metal album category at all, but it is that unmistakable Eluveitie sound that still holds true in the hearts of their fans.

Featuring eighteen songs of varied lengths along with instrumentation the depths crossed in Evocation II – Pantheon reach into an infinite place of thirst and solitude amongst a crowd. As an emotionally calming album, it is definitely not for a wild party soundtrack, yet it provides a diverse cultural folk experience leveling in its layers as any good opera. There are plenty of moments of vocal theatrics which tell a story of a perilous adventure through the forest and into the dark castle. Very much the nature of folk to tell a mythical tale, there is also more than one entire song dedicated to flute as a dominant feature with acoustic guitar harmonies among other eclectic instrumentation. While some of the songs also seem to strike a chord as a familiar anthem with Eluveitie, it is also mixed up with plenty of creative and new compositions that keep the band fresh with charm.

The only downside is if some listeners were expecting the contradiction side to the Folk Metal where the melodic Death Metal elements come in, because Evocation II – Pantheon is free and clear of any heaviness at all. While it is slightly missed as a signature of Eluveitie to turn heavy at the drop of a hat, the new direction is not wrong if it is where they will thrive. Not to worry, the band still possess a unique character that will be cherished, though it must be said, their true strength lies in the part where they combine the traditional Folk with the melodic Death Metal elements.

Evocation II – Pantheon is certainly not an album to pick up and choose individual songs, it plays out more like an opera which must be listened to from start to finish to truly appreciate the whole tale. If fun Folk Metal is a forte, then this album is a high recommendation for flushing out a unique take on the genre. Peace and love flourish in the depths of Evocation II – Pantheon beneath any deep seeded dwellings of unrest. This all said, in a live venue, the collaboration of all the players will not doubt be a sympathetically pleasing set to watch, filling listeners with serenity for days to come. For a bold and beautiful effort, CrypticRock gives Eluveitie’s Evocation II – Pantheon 4 out of 5 stars. 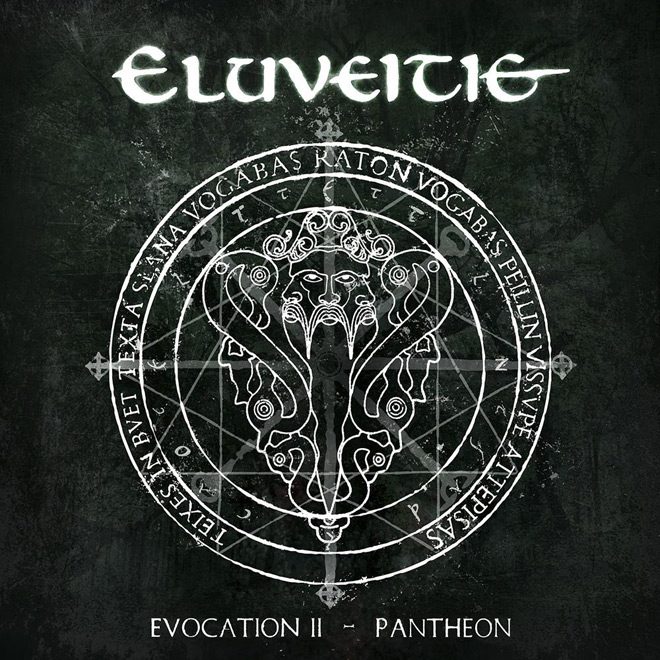