Emperor – Anthems To The Welkin At Dusk Turns 20 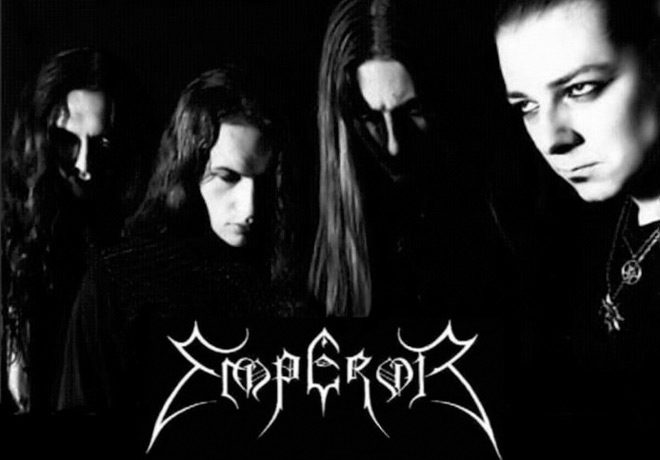 ‘Winds and storms. embrace us now . . . lay waste the light of day . . . open gates to darker lands . . . we spread our wings and fly away . . .’ With words like spells wrapped in mysterious sorcery, so begins an album called Anthems To The Welkin At Dusk, being the second full-length oration from a coven of bright young musicians from Norway who called themselves Emperor. Sharing the crest of the second wave of Norwegian Black Metal with the likes of Satyricon and Mayhem, the doings of composers Vegard Sverre Tveitan (aka Ihsahn) and Tomas Thormodsæter Haugen (aka Samoth) were overshadowed by the spate of rebellious arson and other mischief so typical of the times.

Amid this chaos, the album appeared on the 8th of July, 1997 via Candlelight Records, with bass guitar duties handled by one Jonas Alver (aka Alver), and battery provided by the inimitable percussion of Kai Johnny Solheim Mosaker, or Trym Torson, as he is most widely known. Extreme Metal music would never be the same again.

To classify and delineate Anthems to the Welkin at Dusk as merely a Black Metal record would be to fail to do it justice. Who were its perpetrators, but teenagers barely into the sphere of adulthood? Their grasp of music theory, musicianship eons beyond what might be expected of some so young, is remarkable enough. Remarkable, but not entirely unheard of, as individuals like Jimi Hendrix, Cliff Burton, and Tony Iommi were stunningly capable at equally callow ages. It is what these young men from the darkest reaches of the North did in the famed Grieghallen Studios that truly etched the symmetrical and unrivaled logo of Emperor into the bedrock of immortality.

Bombast and neoclassical accents upon the blasting foundation of Black Metal perhaps reached no greater climax than on Anthems to the Welkin At Dusk. Right around this time, Cradle of Filth and Dimmu Borgir were redefining what Black Metal could do commercially, a trend that would alienate many of the scene’s progenitors and send them off into whole new territories of sound, from the ultra-modern filth of Satyricon and the Moonfog phenomenon to the reactionary shift of Marduk and Gehenna. But here, in 1997, Emperor produced the follow-up to the majestic In The Nightside Eclipse, and the space the album occupied would suffer no rival.

The elongated intro “Alsvartr (The Oath)” sets quite a mood, with a nocturnal grace amplified with the hoot of an owl and a Wagnerian cadence brimming with arrogance and superiority. Emperor were sophisticated enough to cloak their lyrics in a sort of mysticism that left quite a bit of interpretation up to the listener. They were not thrusting a deistic Satan into the listener’s face. Their fervor was rooted in the occult, but more as a wellspring of hidden wisdom linked to the Pagan forefathers of the land of Norway itself. Casting off the chains of religious dogma, freedom found in the seeking of knowledge of long ago, and so on.

And yet, as “Ye Entrancemperium” strikes like a sword to the guts amid a swirl of cymbal crashes and lightning-picked riff mastery, the lyrics could just as easily be about baking cookies. This is perhaps the finest iteration of the Black Metal style ever committed to tape. The startling opening salvo was penned by the deceased Euronymous (Oystein Aarseth) of Mayhem, and it opens up cavernous vaults of deathless amazement that twenty years later sounds as fresh and dangerous as it must have twenty years ago. This five minute and fourteen second ball of sonic hate had every element of Black Metal’s newfound majesty locked within its obsidian heart, from soaring passages of clean vocal harmony to icy blasts ridden with the soaring keys which elevated it to the very heights of Jotunheimen. Truthfully, they could have put down their instruments and took up sheep farming, and their legacy would have remained intact.

But no, an entire album’s worth of this type of quality still remained. Has a keyboard lead ever been placed so perfectly to augment a driving set of riffs as they are in “Thus Spake the Nightspirit?” The unrelenting fury of Black Metal again went lockstep with the neoclassical tendencies the band were so adept at creating. The slow, majestic chant toward the end of the song was on par with the mood set down in Saytricon’s iconoclastic “Mother North,” whereby Black Metal had birthed within itself a declarative mission statement, articulated by so much more than images and words. It was a marriage of the classical and the furious, and on Anthems to the Welkin at Dusk, Emperor had channeled that union into the very marrow of their art.

Being held in such high regard by fans and journalists alike, key songs on the album have enjoyed almost constant presence within Emperor’s live sets both back in the day and in their sporadic reunion events. The aforementioned songs as well as the face-melting “The Loss and Curse of Reverence” are generally pointed to as album highlights, and rightly so. The latter song has one of those immediate and unforgettable beginnings, the kind that embodies all of the aggression and unmitigated malice this style of music represents. The breakdown at 0:53 encapsulates the cliff’s edge headiness of Emperor’s style, blast-furnace hot drumming easing down to a triumphant midsection brimming with amazing keyboard work.

But to elevate an album to the masterclass pinnacle occupied by Anthems to the Welkin at Dusk, the deeper tracks have to be just as good. The forward thinking “Ensorcelled By Chaos” is suggestive of where Emperor would go next, yet still with a strong keyboard presence bolstering but not overpowering the mix. The ferocity of “Acclamation of Bonds” coalesces into a final minute of pure mastery. The lingering keyboard tone crashes headlong into Trym’s battery, the shattering razors of Ihsahn’s throat taking this magisterial song into the smoldering “With Strength I Burn.” A true head-banger, fans have been getting lost in the swirl of the keys and the crunch of the riffs for these twenty years, and look poised to do so for another twenty more and beyond. Lastly, outro “The Wanderer” returns the questing sorcerer home upon the wings of nocturnal song, bursting with pride and wisdom, just like the album’s creators.

There are Black Metal albums today that are on par with Anthems to the Welkin at Dusk, but Emperor brought things to this level amid a very few of their peers, and no one else. Twenty years later, all we can do is crank it up and stand amazed. 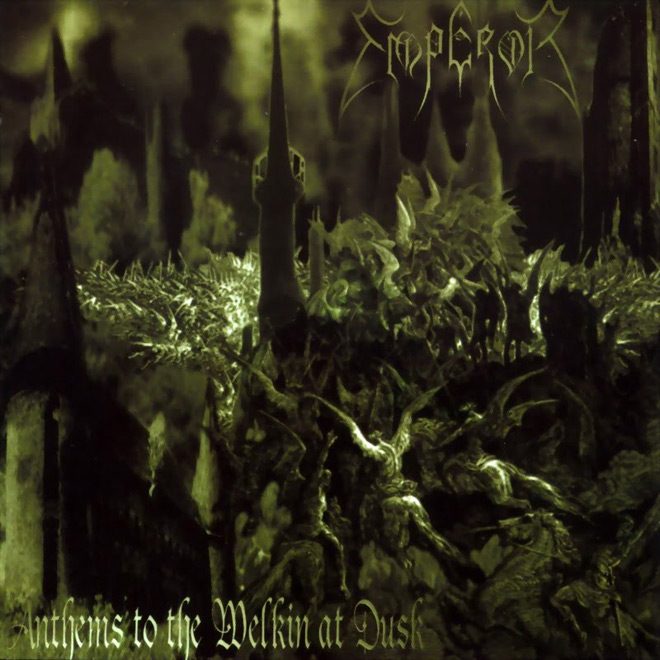 Purchase Anthems to the Welkin at Dusk: Amazon | iTunes