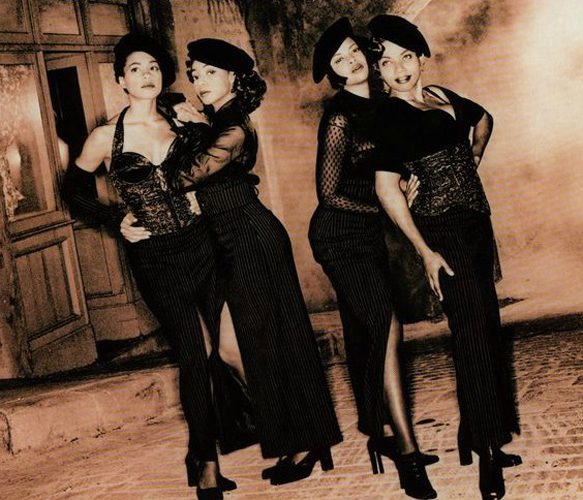 R&B and Pop vocal prowess was never quite as sweet as when it sang across lovely lady lips: En Vogue’s, to be exact. Always in fashion, it seems impossible to believe that these amazing ladies have been Funky Divas for twenty-five years strong as of Friday, March 24, 2017.

Conceived as the brainchild of Producers Denzil Foster and Thomas McElroy – known for their work with Tony! Toni! Tone!, Club Nouveau, and many more – En Vogue was formed in Oakland, California in 1989. The group’s original lineup – Terry Ellis, Dawn Robinson, Cindy Herron, and Maxine Jones – was not some ‘girl group’ to simply write-off: they combined fierce grit and feminine power with infectiously seductive vocal harmonies.

They were born for success, and the ladies of En Vogue immediately skyrocketed up the charts with their debut album, Born To Sing. The single “Hold On” would peak at No. 2 on the U.S. Hot 100 Chart. Throughout their career, the group would sell over 20 million records worldwide and amass an impressive collection of awards and accolades, ranging from Soul Train Awards to Grammys.

It was the ladies’ second album, Funky Divas, that would cement them as a household name. Released on Eastwest Records, a part of the Warner Music Group, the album debuted twenty-five years ago, on Tuesday, March 24, 1992, and would go on to reach the Top 10 in the United States as well as the United Kingdom.

Funky Divas hit No. 1 on the Billboard Top R&B/Hip-Hop Albums Chart, and, to date, has been certified Platinum in Canada and the UK, as well as three-times Platinum at home here in the U.S. The bulk of the album’s commercial success was due to its catchy singles – namely “My Lovin’ (You’re Never Gonna Get It),” “Giving Him Something He Can Feel,” and “Free Your Mind” – though the 1993 “Whatta Man” duet with Salt-N-Pepa did not hurt the album’s sales at all.

Funky Divas was a collection of thirteen-songs that were produced to perfection with addictive choruses, beautiful harmonies, and offered a stunning homage to the great girl groups of the ’50s and ’60s. In a year that saw the eclectic likes of Michael Jackson, Garth Brooks, and Nirvana owning the charts, En Vogue were something completely left of center. Please remember, these ladies came before the Spice Girls, that shamefully fun spoof of a girl group who embraced girl power. En Vogue might not have trotted around in dayglo and platforms, but they definitely embraced the belief that ladies do it better!

The first single/video off Funky Divas was “My Lovin’ (You’re Never Gonna Get It)” – a sassy yet classy warning to one particularly persistent ex – was released in March 1992. The song contained a sample guitar riff from James Brown’s “The Payback” that formed the backbone of the melody, with Maxine Jones and Dawn Robinson splitting the lead vocal duties. Lyrically, the song explored the topic of a desperate ex who had his chance to change, clearly did not, and was trying to weasel his way back into his former girlfriend’s life, and girlfriend, he’s never gonna get it!

VH-1 ranked “My Lovin’ (You’re Never Gonna Get It)” No. 43 on its list of the 100 Greatest Songs of the ’90s and the single was certified Gold by the RIAA. “My Lovin’ (You’re Never Gonna Get It)” would go on to appear in films (notably Chris Rock’s 2007 I Think I Love My Wife), as well as on television’s Sabrina, the Teenage Witch and in the video game Grand Theft Auto: San Andreas. In 2015, on the TV show Lip Sync Battle, Queen Latifah would perform a fabulously fun cover of the track.

Released less than three months later, in June 1992, “Giving Him Something He Can Feel,” the album’s second single/video, was a love song that evoked sensuality without crossing the line toward tawdry. The track was composed by legendary Curtis Mayfield for the 1976 film Sparkle and was originally recorded by the great Aretha Franklin. Updating the track some fifteen-years later with Dawn Robinson on lead vocals, En Vogue’s version of the song would peak at No. 6 on the Billboard Hot 100 Chart and take the No. 1 slot on the Billboard Hot R&B Singles Chart. It was a soulful R&B cover that remains a classic to this day.

Perhaps the true gem off Funky Divas was the album’s third single/video for the infectious ’90s anthem, “Free Your Mind,” which would arrive to store shelves and televisions in September 1992. A fierce Pop Rock anthem, a rebel yell for open-mindedness and a battle cry against prejudice, “Free Your Mind” was a Top 10 hit on the Billboard Hot 100 as well as a Top 20 hit on the UK Singles Chart. The song contains a chorus line from the acid-tripping George Clinton/Funkadelic song “Free Your Mind and Your Ass Will Follow,” which was used with Clinton’s blessing. The opening line – “Prejudice, wrote a song about it. Like to hear it? Here it go!” – is adapted from a line originally used by one of David Alan Grier’s many characters on the hit Fox Comedy In Living Color.

Certified Gold by the RIAA, “Free Your Mind” features the ladies of En Vogue trading off to all share in the lead vocals. At the 1993 MTV Music Awards, the song would go on to win a trio of awards: Best R&B Video, Best Dance Video, and Best Choreography, all for the stunning video by award-winning Director Mark Romanek (Johnny Cash, Madonna, Nine Inch Nails). Coupled with the award-winning visuals, the powerful song would move legions and end up being covered by a plethora of artists including, notably, The Band. It would also crop up on episodes of the hit TV series Glee and Modern Family, and has been used in various films over the years, including the Seth Rogen Comedy The Interview.

Additional singles “Give It Up, Turn It Loose” and “Love Don’t Love You” would follow in November 1992 and January 1993, respectively. “Give It Up, Turn It Loose” – featuring Maxine Jones on lead vocals – reached No. 15 on the U.S. Pop Charts, No. 16 on the U.S. R&B Charts and earned the song a Grammy nomination. Worth noting is that the song’s title is a reference to the 1969 funktastic James Brown track “Give It Up or Turnit a Loose.” Though the visuals were merely recycled from other, former releases, “Love Don’t Love You” did receive a video treatment.

As with many truly great, classic Pop albums, many of Funky Divas‘ treasures never made it to singles or videos: there was an additional Aretha Franklin cover, “Hooked On Your Love,” as well as a take on The Beatles’ classic “Yesterday.” A second edition of the album was released in the UK in 1994, including a collection of remixes, as well as the hit “Runaway Love” and the majorly successful collaboration with Salt-N-Pepa, “Whatta Man.” None of this hurt the overall success of Funky Divas whatsoever.

Twenty-five years later and Funky Divas still has the same vocal ferocity and fresh pomp that it had on its very first public hour. The thirteen-song collection was the epitome of Platinum Vocal R&B/Pop: from soaring melodies to lyrical abandon, sassy personality to classic influences.

En Vogue were at their height on Funky Divas: four talented young women with a generation of MTV watchers at their feet, able to bend genres and lyrical notes to perfection. The fact that they actually had something intelligent to say was just another cherry on top of an already amazing masterpiece. 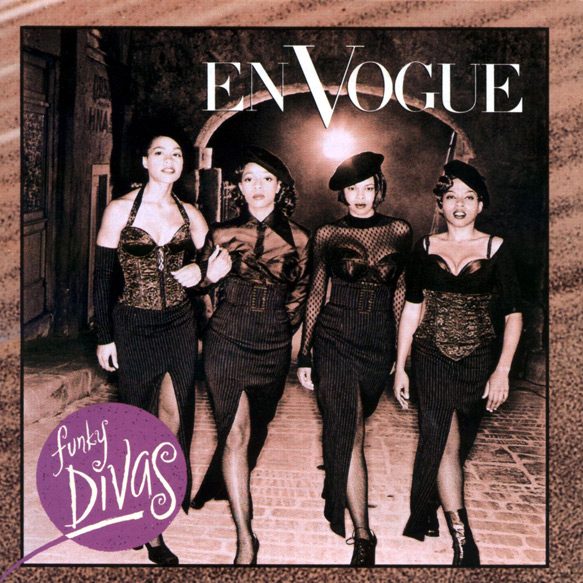 The ladies continue to tour to this day, though the line-up has seen some changes over the years. In fact, now a three-piece, En Vogue are currently promoting their forthcoming release, Electric Café, and will be on tour throughout Europe this April. Visit EnVogueMusic.com for further details.