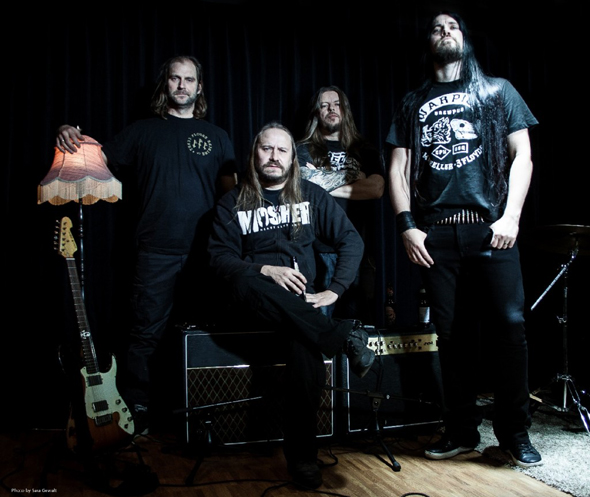 Hardly any other band than Sweden’s Entombed A.D. is the perfect embodiment for the term Death ‘n’ Roll. Rising from the ashes of Nihilist and the 1988 formed Entombed, the founding member Lars Göran Petrov and company still carry the torch of a dirty Rock-n-Roll attitude with a ribald Death Metal sonic assault unflinchingly. After releasing all-time classics such as 1990’s Left Hand Path, 1991’s Clandestine, and 1993’s Wolverine Blues while embodying the Sweden Rock-scene as Entombed, the Sweden four-piece returned in 2014 under the simple, but consequent flag of Entombed A.D.

A debut as the new band, but a comeback in the eyes of fans, original Entombed Vocalist Lars-Göran Petrov teamed up with Drummer Olle Dahlstedt (Entombed member since 2006), Guitarist Nico Elgstrand (Entombed member since 2004), and Bassist Victor Brandt (Entombed member since 2010) to put out Back to the Front. A well-received piece of work, Entombed A.D. continue to show life with their latest album Dead Dawn. Released on February 26th via Century Media, the latest album is rounded out by eye-catching cover artwork by Watain frontman Erik Danielsson and, sound-wise, restaged by the dirty production of Tom Van Heesch and Jacob Hellner of Big Island Sound, Stockholm, and tracks produced by Elgstrand himself.

Beginning with penetrating power is “Midas In Reverse” as fans await to become fully occupied by this Death ‘n’ Roll train. Dirty riffing and the roar of Petrov are enough to show fans how it is done. Following the album title track; melodic, headbang-worthy “Dead Dawn,” is “Down To Mars To Ride,” which will push every Death Metal disciple to the wall as the compelling and willful guitar sound combined with the tough-minded rhythm section take care of the typical Stockholm sound. A little bit more clumsy and heavy-handed, doom comes in “As The World Fell” with a light Slayer, Into the Abyss-mood. A nice change of pace, “Total Death” then hauls in like a wrecking ball once more, followed by sludgy sounds of “The Winner Has Lost.”

Moving along, highlighting the wall of sound that is Dead Dawn, comes “Silent Assassin,” which may remind some listeners of Entombed’s Clandestine days. This is before Entombed A.D. restrict the tempo once more with “Hubris Fall“ to darkened realms with deep atmospheric tones as well as background piano. Then, “Black Survival” erupts and pushes the throttle again like a brainsick wrong-way-driver. Then, without warning, the ten track album concludes with “Not What It Seems.“ A whirlwind of guitar riffs and Petrov’s deepened growls, it is a fitting way to end the record.

With Dead Dawn, the Sweden quartet again registers requirements on the top position of the Death ‘n’ Roll scene with a diverting piece of dirty Rock-n-Roll that will be presented in a massive live-campaign all over the world in 2016. There is melodic, brutal, and doomish, as well as Rock-n-Roll, moments scattered throughout the record. With that said, Entombed A.D. deliver a second sonic bomb that picked up right where Back to the Front left off while being both pleasing to long-time Entombed fans as well as newcomers to the party. CrypticRock gives Dead Dawn 4 out of 5 stars. 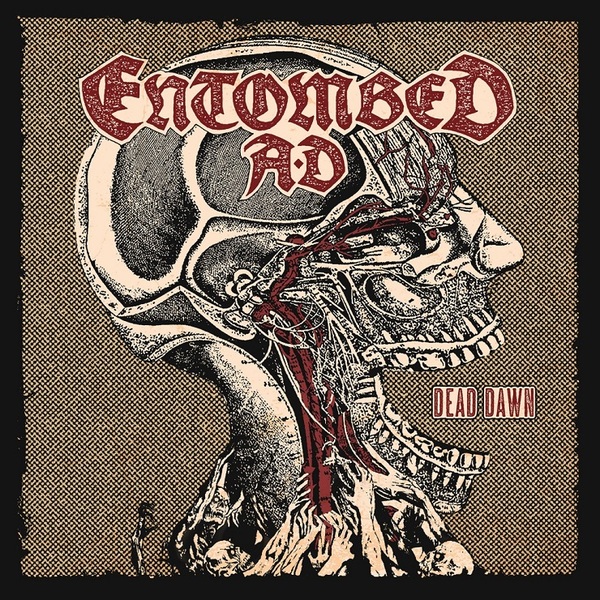