Rarely have there been films throughout history that plunge viewers into an altered state of consciousness, turning one man’s dream into every man’s nightmare quite like Eraserhead. The full-length feature debut of iconic filmmaker David Lynch, Eraserhead is an 89-minute avant-garde film shot in strongly contrasted black-and-white. Lynch, often associated with his work on the Twin Peaks series, is by far one of the most important surreal film directors of his time and looked to make a big impact with the film. That said, while Eraserhead was not initially well-received by viewers it ended up becoming one of the most widely discussed and appreciated works of cinematic art that is still cultivating fans of all ages 40 years later. 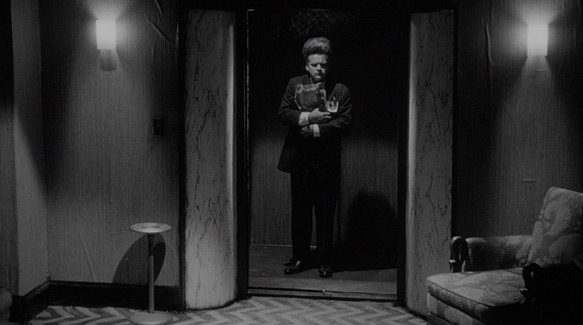 During a decade when Psychological, Supernatural, and Slasher films dominated the world of Horror, viewers could not begin to prepare themselves for the bizarre nightmare that newcomer Lynch would unleash upon the world on Saturday March 19th of 1977.

Obsessively working on this project for nearly five years before finishing it, Lynch was responsible for, or was a part of, nearly every aspect of the filmmaking process; which included gifted writing, inspired directing, well-organized producing, penetrating production design, mesmerizing special effects, and creating a poignant film score.

At its very core, Eraserhead is about one man’s frustrations and fears of being an unexpected parent, trapped in a complicated relationship, and living in a soul-crushing industrialized wasteland of a city that continues to knock him down. The movie follows the story of the spirited and hopeful Henry Spencer (Nance) who discovers after being invited to have dinner with Mary X (Stewart) and her parents, that their brief fling has resulted in the birth of a rather deformed monstrosity of a child. Together, they must now care for the child at the insistence of Mary’s parents, in spite of the young couple’s strained and aloof relationship.

Now forced to marry against their wishes and move in together, Henry and Mary try to make things work in an overwhelmingly deafening and dispiriting city; all while failing to properly care for a child which suffers from such severe defects that it is left defenseless, vulnerable, and altogether reliant on its rather inattentive and indifferent parents. Eventually Mary can no longer handle the responsibility and hardship of caring for a child with so many needs, causing her to leave for days at a time and thus appointing Henry to the arduous task of attending to their burdensome, grotesque, and ailing infant. The strain ultimately becomes too much for Henry, as he has had to give up certain temptations and joys in life, now that it is expected that his child take precedence maintain some level of control over his once carefree and tranquil lifestyle. 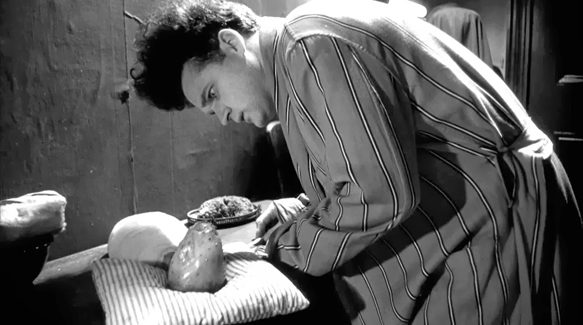 In an effort to restore that sense of serenity, Henry creates a means of escape from his dismal and monotonous life in the form of the blonde, robust Lady in the Radiator (Near). Once the high-pitched whistling of the radiator starts drowning out the sounds of the city, the nagging of his new wife, and the incessant wailing of their child, Henry enjoys the performances put on by the Lady in the Radiator.

Interestingly enough, the Lady in the Radiator character was not even born until after Lynch began Transcendental Meditation a year and a half into filming. Her purpose then became very clear, as she was meant to be the physical embodiment of Lynch’s ability to actually escape the negativity of life through Transcendental Meditation and thus allowing him to retreat to his “Happy Place;” the place that provides peace and light even in the darkest of times.

For a film that is noticeably deficient of dialogue, with of the time being entirely void of verbal exchanges, Lynch is still capable of conveying a straightforward story via convoluted yet sophisticated symbolism, dreamlike cinematography and disconcerting special effects.

The film is aided by an unnerving score that creates an atmosphere of fear, anxiety, isolation, and the recurrence of compulsive paranoid neurosis. In addition to the many aforementioned elements that make this movie such an incredible work of genius, it is also worth mentioning that the acting was done with such exactitude, that words were rarely even needed when the characters’ facial expressions and mannerisms spoke volumes.

While filming for nearly five years, Lynch was met with a multitude of obstacles which hindered the project . One hurdle which proved problematic was the limited budget in the amount of approximately $10,000, which he was granted by the American Film Institute. After spending that money, Lynch was still without a finished product, so he acquired the remaining estimated $10,000 it took to wrap up the movie through donations from childhood friend Jack Fisk and his wife, Sissy Spacek; as well as obtaining additional funds from Nance’s waitress wife and Lynch himself.

With an estimated budget of $20,000, Eraserhead was released at the Filmex film festival in Los Angeles, California, which only 25 people attended, and for which 24 of those individuals returned the following night. The film got such mixed reviews from a variety of critics that the film’s real success wouldn’t emerge until its long-standing run on the midnight movie circuit at the initial request of head of distribution for Libra Films, Ben Barenholtz. This is where it gained its avid midnight cult following. Over the next four decades, it was released and re-released in theaters all over the globe, as well as making it to VHS, DVD and Blu-ray; which resulted in generating international profits of nearly $60 million when all was said and done. 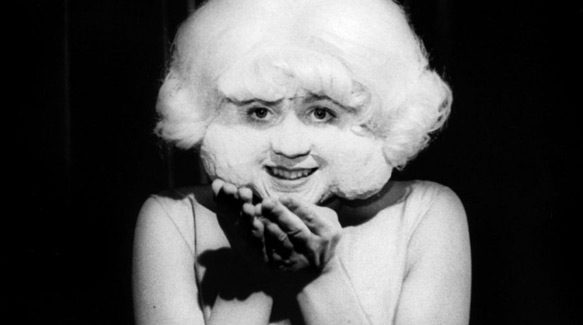 Though eventual success took a relatively prolonged time, it ended up making up for the various complications that occurred during filming. Lynch faced yet another hurdle when his original yet novice cinematographer, 35 year old Herbert Caldwell (The Amputee 1974), died in his sleep two years into working on the film.

Caldwell was later replaced by Frederick Elmes (Blue Velvet 1986, Hulk 2003), who then took over and assisted Lynch with finishing the film. The movie was a cinematic sensation that swept across the world and created quite the buzz among some of Hollywood’s elite.

In fact, after Mel Brooks (Spaceballs 1987, Blazing Saddles 1974) viewed Eraserhead, he sought out Lynch and offered him the opportunity to direct the 1980 film The Elephant Man, which they would work on together, but would primarily be Lynch’s unique perspective and brilliance behind it.

In addition, it has even been stated that Stanley Kubrick (A Clockwork Orange 1971, Full Metal Jacket 1987) required the cast of his famed 1980 Horror classic The Shining to watch Eraserhead before filming ever began, to “get them in the mood to film a horror movie.”

Eraserhead  has always been so much more than just a mere Horror movie though; it was a film that could be enjoyed by many because it embraced several movie genres and subgenres such as Fantasy, Comedy, Body Horror, and even Psychological Horror. The strong, blatant sexual undertones coupled with Lynch’s amusing depiction of sex and conception, as well as the awkward encounter between Henry and Mary’s parents, made it purely comical at times. The deformed baby, which was believed to have been an actual cow fetus, on top of the nightmarish dream sequence and shocking ending, took Body Horror to sickening degrees. And finally, the psychological torment Henry faced throughout the movie came to head when he was left with a difficult decision to make.

One of the most interesting things about Lynch is that he is a man that does not believe in explaining his films or their context because he believes that art is something meant to be subjective, personal, and individually interpreted. He has always maintained that anyone that watches his films may experience them and connect with them differently than the next person, so in an effort to preserve such particularized encounters, he does not explicate his movies or motivations behind them. 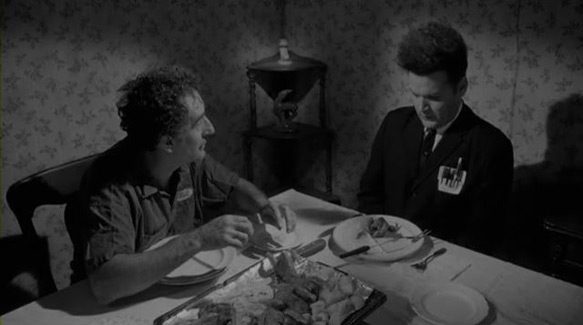 Even so, many viewers believed this movie was about Lynch’s own personal fears of fatherhood, considering he had a three year old daughter, Jennifer Lynch, who was both unplanned and exhibited a birth defect which required her to undergo extensive treatment for having severely clubbed feet. It could also be inferred that the relationship between Henry and Mary somewhat mirrored that of Lynch’s and his wife, Peggy, considering they filed for divorce in 1974.

Finally, the film illustrated Lynch’s hatred for the city of Philadelphia, Pennsylvania, which is where he lived while attending art school, by means of earsplitting factory sound effects, brief displays of human depravity, and depicting it as barren, industrial wasteland.

With all of that being said, Eraserhead is still one of the most loved and hated films to this day; with some people considering it confusing, boring, and disgusting, while others found it to be insightful, humorous, and especially unsettling. Regardless of anyone’s opinion of Eraserhead, one thing is certain; David Lynch will always be one of the most fascinating, original, and ingenious directors of all-time. 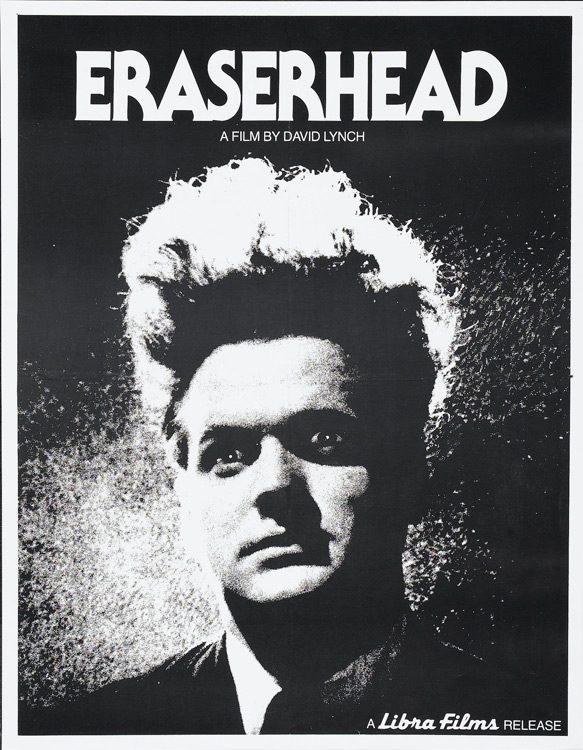