Erasure – 30 Years After The Circus

For well-versed Synthpop enthusiasts, it is merely impossible not to associate the English duo known as Erasure with the juggernaut that is Depeche Mode. After all, Songwriter and Keyboardist Vince Clarke is one of Depeche Mode’s founding members. That said, while both bands respectfully achieved success with the rise of Electropop in the ‘80s, Erasure’s overall sound steered away from the darker tone of their musical counterpart, adopting a style that resulted in a plethora of memorable Dance hits.

Looking back, Clarke and the engaging Vocalist Andy Bell had a rocky start with their 1986 debut album, Wonderland’s first three singles failing to crack the Top 40 in the United Kingdom. Although, things would soon change with their fourth single, “Sometimes,” which ended up on their sophomore album, The Circus. Released on March 30th of 1987 via Mute Records in the UK and a little over three months later via Sire Records on July 7th in the United States, The Circus was a turning point in Erasure’s history.

Led by “Sometimes,” the single became their first hit, peaking at number two in the UK and Germany. As a result, its success sparked a chain reaction with The Circus becoming the duo’s breakthrough album in the UK, culminating in four hit singles and becoming Erasure’s longest-running album on the UK charts.

As stated, The Circus is a significant album for Erasure as they look back on their history. Its success increased the band’s popularity, and though they did not make as big of a splash in the U.S., the album did manage to make it into the Billboard 200 and gave Erasure two hit singles on Billboard’s Hot Dance Music/Club Play chart. Furthermore, more than just their success on the charts, the duo established a more definitive identity to their sound and gave audiences some cherished songs that remain as special today as they were thirty years ago.

Consisting of ten tracks produced by the famed Flood and Clark himself, “It Doesn’t Have to Be” raises the curtain on The Circus. A single released single six weeks prior to the album, it has Bell pleading for the end of apartheid in Africa as he sings, “We are strong now/ Put down the ammunition/ For what we know is right/ Is gonna breakdown this division.” It is a sentiment that is relevant in the divided world we live in today. The following track, “Hideaway,” also contains an important message, one that also remains significant in today’s cultural climate. The song is introspective and seems to pull from Bell’s own experience as an openly gay man. It speaks of the fear of rejection that comes with being true to one’s self. Simply put, it is about coming out and being able to find strength and hope.

The title-track of the album, “The Circus,” provided another side to Erasure’s sound. Taking on a more melancholic and atmospheric tone that accompanies the song’s subject matter, it is set against the backdrop of a haunting accordion and ominous melody. Meanwhile, Bell sings about social issues affecting Britain at the time when miners experienced colliery closures at the hands of corporate greed and technology. A bold move at the time, it may have seemed like a departure from the duo’s usual Dance tunes, but it mesmerized listeners and became Erasure’s third UK top ten hit.

One of Erasure’s signature tracks, “Victim of Love,” is a catchy up-tempo, synth-heavy tune. Released in May of 1987, it landed the duo at number one on the U.S. Hot Dance Music/Club Play chart, and to this day remains a beloved track. Similar in structure to “Sometimes,” which helped defined Erasure’s sound, both are Dance-Pop tunes that talk about love and have a lighthearted, infectious quality.

Moreover, while The Circus proved to be a hit with its four highly charted singles, it showed a maturity to Erasure’s sound. This was evident in each track recorded, which included different themes while balancing more simple melodies and universally relatable subjects to more complex composition. This all while touching, providing both a social and personal commentary. That in mind, “Leave Me to Bleed” takes a sexier and more sinister turn as it talks about a cheating lover whereas the album’s bookend, “Spiralling,” talks about lost love and ends with the sound of a fading Waltz.

Although Erasure never really broke into the U.S. mainstream music market, they have become a treasure in their native UK as well as popular around other parts of Europe and South America. The Circus unquestionably is a milestone in their career, establishing what the world would identify as the Erasure sound. Showing growth in the substance of the songwriting and the issues they chose to address, The Circus also proved to be a lot of fun to listen to.

Now three decades later, Clarke and Bell are still at it with plans of releasing their seventeenth album, World Be Gone, on May 19th in the UK and a day later in the North America. In addition, they will be embarking on a summer tour with Robbie Williams across Europe and Russia. Perhaps their longevity can be attributed to The Circus. Whatever it may be, thirty years down the road, The Circus remains both a catchy Synthpop album with songs that are memorable and continue to endure. 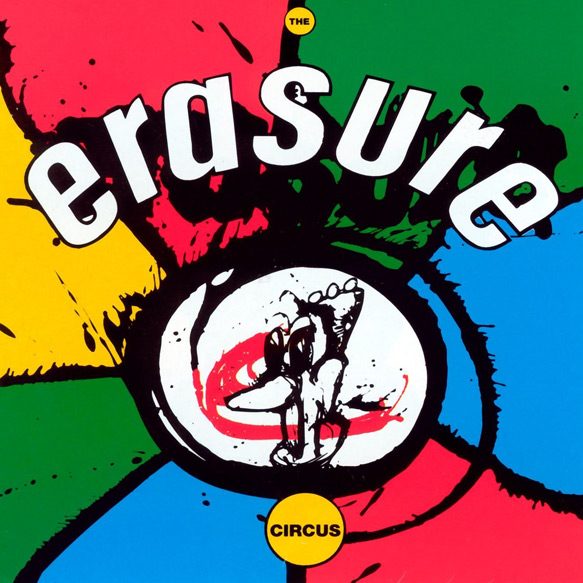