Just as there has always been good in the world, there has also been evil. It hides, lurks, and creeps around corners, waiting for the opportunity to spread. Latest Horror movie Evangeline, released on May 8th, 2015 on demand in the United States via Uncork’d Entertainment, channels that evil into the isolated creepy woods in Canada. Filmed around Capilano University, North Vancouver, British Columbia, and written and directed by Karen Lam (Stained 2010, Very Bad Men series 2012), Evangeline stars Kat de Lieva (Halo 4: Forward Unto Dawn 2012, The Memory Book 2014) as the main protagonist and titular star. Told by observational point of view, and set in modern day, the events of Evangeline begin some time after the death of her sister from cancer, Evangeline escapes her strict life under her preacher father to go to college. 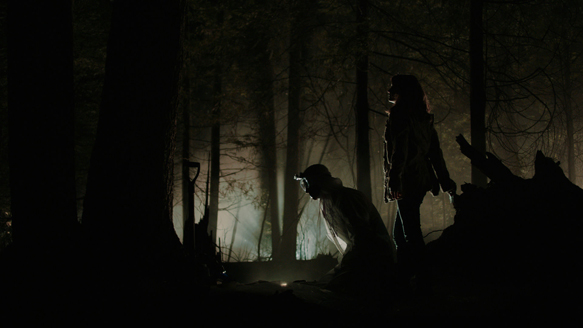 She makes quick friends with roommate Shannon (Mayumi Yoshida: Erase 2013, Cult series) – who also plays the demon, her boyfriend Mark (Anthony Shim:  Valentines 2008, Percy Jackson: Sea of Monsters 2013, The Flash 2015), and their mutual friend Molly (Natalie Grace: Fringe 2011, My Daphne 2014). Evangeline embraces college life, with meeting boys, partying, and drinking first on the agenda. During a forthcoming weekend, Evangeline opts to stay at the college while Shannon, Jack, and Molly go home. On the first evening, she meets a frat boy, Mike (Richard Harmon: Percy Jackson & the Olympians: The Lightning Thief 2010, If I Had Wings 2013), whom she had noticed at a recent party. After a few games of pool, Mike invites her to a cabin formerly owned by his father, but now by his frat house. Initially, Mike seems like a genuinely nice guy, but it is not long into their time together that Evangeline discovers Mike is not what he seems. Sometime after, she finds herself being beaten and strangled by Mike, Ali (Dejan Loyola:  Percy Jackson & the Olympians: The Lightning Thief 2010, The 100 2014), and Mitch (Madison Smith: Restless Virgins 2013, Sorority Murder 2015), seemingly to death. They dump Evangeline’s body in the woods, which begins a time of death and rebirth for her, and she is not seen again for a long time. 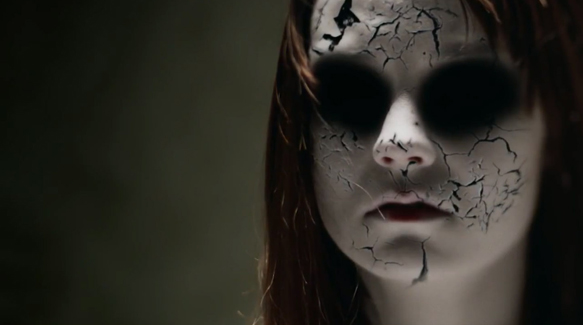 Simultaneously, as Evangeline struggles to keep her tenuous grip on life, a serial killer, Mr. K. (David Lewis: Lake Placid 1999, Man of Steel 2013), is roaming the streets killing young women and burying their bodies in the woods. His point of view intersects with Evangeline’s. Shannon, Molly, and Jack worry about Evangeline’s disappearance, posting missing posters everywhere and following up leads, unfortunately to no avail. After her attack, Evangeline wakes up in the woods, surrounded by other people, such as Dee (Nelson Leis: Insecticidal 2005, Chiral 2015), who gives her a hard time, and Billy (Kelvin Redvers: The Dancing Cop 2012, Rattlesnake 2014), whom Evangeline has a bond with and he takes care of her. While she is in the woods, she is also being held, bound in a abandoned warehouse, her soul tormented as an evil starts possessing her. She begins transforming into a dark version of herself, not unlike Eric in The Crow (1994), and wreaks vengeance upon those who hurt her.

When Evangeline reappears in the same reality as Mike and the others, she is a demonic version of herself, the sweet girl she once was is long gone. Scene by scene, Evangeline’s life crumbles, only to be rebuilt by an unexpected source. Surreal and dreamlike sequences fill out the background surrounding Evangeline’s fragile mental state, pushing the story forward to its climactic end. Shannon, Molly, and Jack must watch helplessly by as evil invades their lives in many forms, one of which is their former friend. With elements of American Mary (2012) and The Invisible (2007), Evangeline has a high impact plot delving deep within a troubled mind, but whose mind is it? 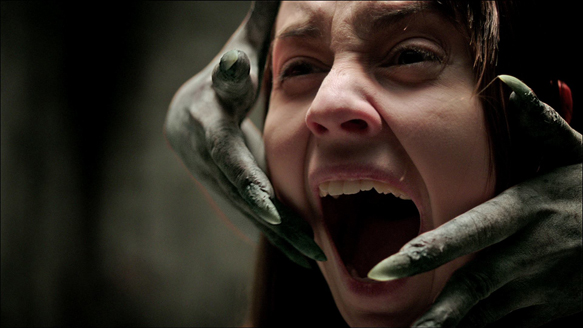 Impeccable and down-right scary special effects complement the creepy devoid landscape that cinematographer Michael Balfry (The Dead Zone series, R.L. Stine’s The Haunting Hour series) easily creates. The film is well-acted with just the right level of intensity by the young cast, who all show promise for their future acting careers. Lam has created an explosive viewing experience, keeping the viewer on the edge of their seats until the bitter end. The open ending leaves more questions than it answers in relation to a few subplots, which may frustrate some viewers, however, it also allows the viewer to make up their own mind. A must watch for all Horror fans, CrypticRock gives Evangeline 5 out of 5 stars. 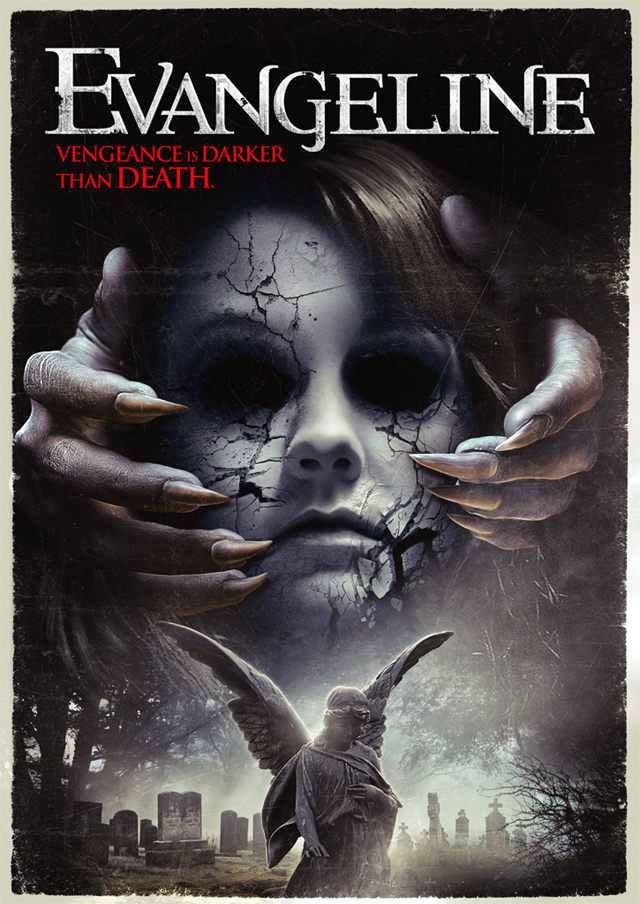