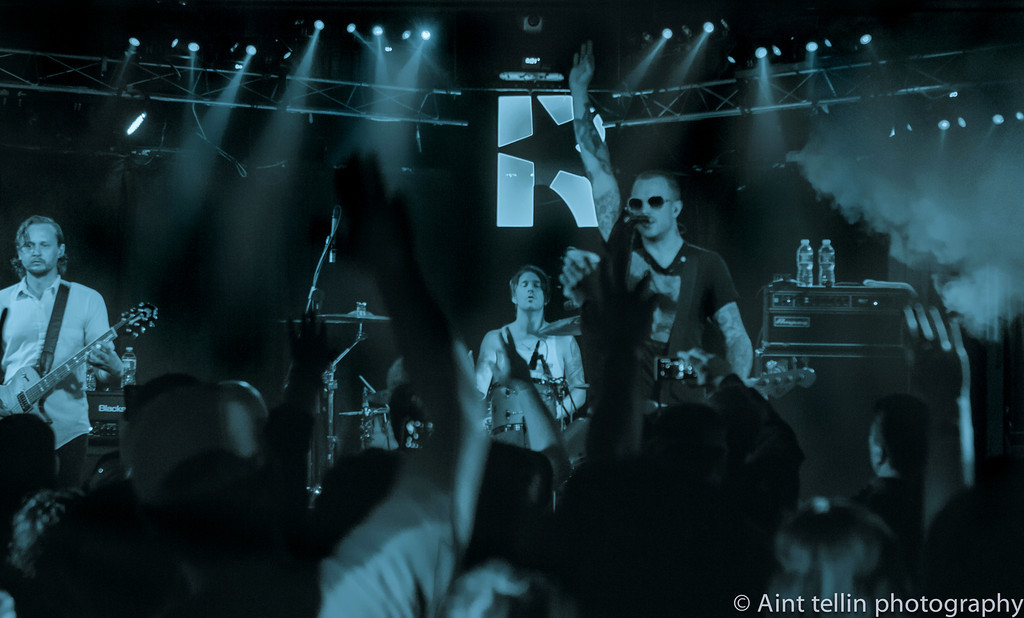 During the late 1990’s grunge rock had left it’s mark, pop punk was in full swing, and alternative rock was flourishing. One such band which made it’s mark on the alternative rock scene were Southern Cali’s Eve 6. In early 2011 Max Collins (vocals/bass), Jon Siebels (guitar/ back-vocals), and Tony Fagenson (drums) reunited for the first time since 2004. Now 2 years back together the original line-up that put out 3 albums, 1 of which went platinum and another gold are touring regularly. Their 4th album Speak in Code (2012) was almost a decade in the making and peaked at 40th in US charts and 10th in US Alternative charts. On Wednesday October 23rd Eve 6 came to Revolution in Amityville, NY to put on an fun filled rock show.  Revolution was packed for Eve 6’s performance and that is rather impressive considering a middle of the week show on Long Island is a hard sell.  This would be the 2nd time in 12 months Eve 6 has hit the Long Island, playing with Everclear back in December 2012 here.  Considering Collins spent some of his life out in New Suffolk on the North Fork of Long Island coming back here is always a fun time for him.

Opening their set with a bang Eve 6 played new track “Situation Infatuation”. The song got the crowd moving with it’s dance like beat and catchy lyrics. They quickly went back to 2000 playing “Promises” and “Amphetamines” off the Horrorscope album. Here, these tracks live really took the fans back in time and throwing in hit “Think Twice” put smiles on many faces. In his typical form Collins engaged the crowd with obstructively structured sentences with clever play on words. Focusing on the Horrorscope album Eve 6 kept the party going with upbeat track “On The Roof Again”. Siebels’ guitar sound was clear and powerful and Fagenson was all smiles on drums having a blast. It was at this moment the band broke out their mega hit, and one of their most distinctive tracks, “Here’s to the Night”. It felt like a senior prom at Revolution as the banded played the track out with the audience swaying back and forth.

Keeping things interesting, the band played the 2001 Out Cold film soundtrack song “Anytime” and broke into a cover track of Ace Of Base “All That She Wants”. To many covering the track would seem like a goof but it sounded excellent with just Collins strumming his acoustic guitar and singing it in a sweet clear tone. It was at this point we were taken back to present day with the catchy fun leading track off Speak in Code (2012) “Curtain”. Obviously an audience of dedicated fans, they were not just here for the hits and clearly purchased the new record as many were singing along with this track and the addictive “Victoria”.

The set winded down paying homage to the record which started it all back in 1998 for Eve 6 with “Open Road Song”, “Tongue Tied”, and big hit “Inside Out”. Fans sang along with each word of “Inside Out” loud and clear and it was never more exciting than when the chorus hit and you could hear the chant of the ending line “Rendezvous then I’m through with you” resonating through the audience. With maximum levels of excitement these fans wanted more and they were treated to a clear favorite “Superhero Girl” in an encore. The audience moved back and forth, side to side and it was a chaotic party bringing things to a perfect ending. It’s great to see Eve 6 back rocking clubs and the alternative rock scene missed these unique late 90’s rockers have to offer.