On August 15th of 1997 viewers were shown what could happen if the power of a black hole, the most destructive force in the universe, was harnessed by man in Paul W.S. Anderson’s amazing, but profoundly under-appreciated film Event Horizon. 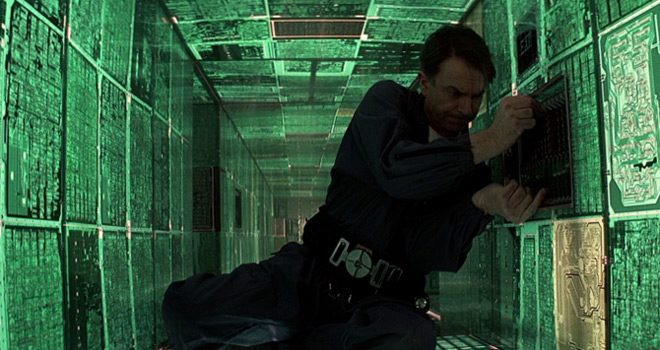 Made with an estimated $60,000,000 and shot at Pinewood Studios in Buckinghamshire, England, at the time, they was a pretty big budget. Unfortunately the film only made a little over approximately $9,000,000 its opening weekend and grossed just over approximately $26,000,000, making it a pretty significant box office bomb. Sadly, the deck was stacked against Event Horizon from the beginning since the summer of 1997 was to belong to Jame Cameron’s blockbuster Titanic. With that film plagued by delays, it had to be re-scheduled to December 1997, thus leaving Paramount Pictures with a gap in its summer movie schedule, so they offered Event Horizon to Anderson on the condition that the film be ready for an August 1997 release.

Having worked on 1995’s Mortal Kombat film, a PG-13 project, Anderson was eager to tackle a R-rated film and jumped at the chance to direct Event Horizon despite the truncated production schedule. Arguably, Event Horizon had the chance to be a Sci-Fi/Horror epic, but alas, the studio was just looking to release something to fill a slot. All this aside, it is well worth further discussion as it turns 20 years old.

The Event Horizon is a research ship that was created Dr. William Weir (Neill) with the sole purpose of interstellar travel by the means of creating a black hole. On its maiden voyage, it activated the core and disappeared. Seven years later, it reappears in a decaying orbit around Neptune. Capt. Miller (Fishburne) and the crew of the rescue ship, Lewis and Clark, along with Dr. Weir are tasked with investigating the ship and searching for any survivors. Upon their arrival the crew realizes that the ship has gone someplace man was never meant to have gone…and brought something back with it. 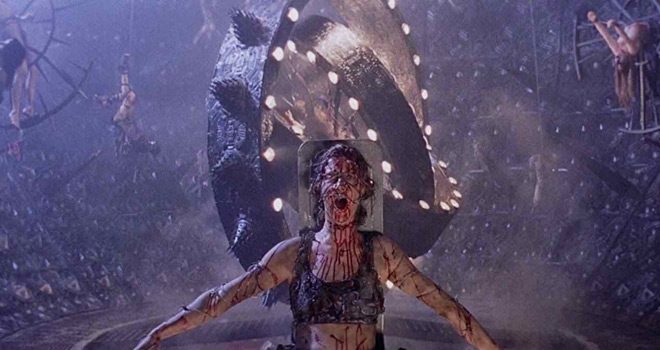 With an interesting plot, perhaps the biggest story of Event Horizon is what did not make it on the screen. The original cut of the film ran roughly 130 minutes, while the theatrical cut is only 97 minutes. That’s a huge loss of 33-minutes of story and gore. Admittedly, Anderson cut a lot of footage due to story flow, reviews from test audiences and studio pressure. There was a love story dynamic between Miller and Starck (Richardson), a longer version of the scene where Peters (Quinlan) hallucinates her son with his legs exposed and mutilated and covered with maggots, and the scene where Miller finds D.J cut open and hanging was longer and it had more shots of his guts on the table.

That is all well and good, but the stuff that made the test audiences sick and left fans clamoring for this cult classic, is the notorious “Blood Orgy” sequence. For the uninitiated or forgetful, this was the footage that was found on the ship’s log that showed the crew literally tearing each other apart. There were a lot more shots of the Event Horizon crew naked, covered in blood, raping and eating each other. There was also a more graphic version of the scene where the man pulls his own intestines out of his mouth. One crew member is held and stabbed in the back of the head with a spike that comes out of his mouth, another crew member is crawling on the floor while others are hitting his legs with steel bars, smashing them to pieces as he screams.

As this crew member is crawling away, he is leaving pieces of his legs behind, one girl has screws drilled into her teeth, another girl is held while her arm is broken with a hunk of metal, one more girl has her breasts mauled and then ripped off by another crew member. The main reason for the cuts to this scene were based on test audiences literally vomiting and passing out. People were disturbed because, the filmmakers hired real life amputees to effectively simulate the dismemberment of the crew. They also hired porn actors the make the sex and rape more violent. 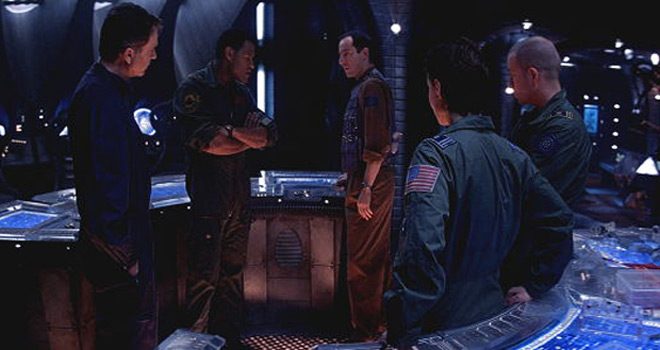 Interestingly in a 2017 interview with sandiegoreader.com, Anderson states that one year after the film’s release the head of production at Paramount, John Goldwyn, admitted that he felt Event Horizon was not properly released. He also advised that he wanted Anderson to make the longer film that he wanted to make.  So for some time, Anderson and producer, Jeremy Bolt, worked on a director’s cut. They traveled the world to locate the original footage, some of which was found in the strangest of places (for example, in an abandoned Transylvanian salt mine). However, they quickly realized that since the movie was made before the DVD era (when alternate versions became much more commonplace), much of the original footage had been destroyed, or its storage place had not been documented; what was retrieved had often been badly archived or was otherwise degraded.

A few of the scenes, including one where Dr. Weir is informed of the re-appearance of the Event Horizon, survived. This made it onto the Special Collector’s Edition DVD, and survived only in videotape form, sometimes without dialog or sound effects. The DVD also includes storyboards of a space walk sequence that was abandoned for budget reasons, and the alternate ending, with commentary by Anderson. A VHS copy of a rough edit did at one point resurface, but Anderson revealed that this version was too heavily damaged, and had to be thrown away. Although he stated not to be optimistic about the prospects of a director’s cut, he did not rule out the slim possibility that missing footage of sufficient quality turns up one day.

Keeping the film relevant, Event Horizon was preordained by Kurt Russell (The Thing 1982, Overboard 1987) on the set of Anderson’s 1998 film Soldier to become a cult classic. Anderson screened Event Horizon before they started work on Soldier, and Russell said “Forget about what this movie’s doing now. In fifteen years time, this is going to be the movie you’re glad you made.” However, fifteen years is a long time to wait while wading through the excrement filled streams of negative reviews. On the other hand, the film had some early supporters, with Empire magazine and Total Film both awarding Event Horizon a 3 out of 5 stars rating. 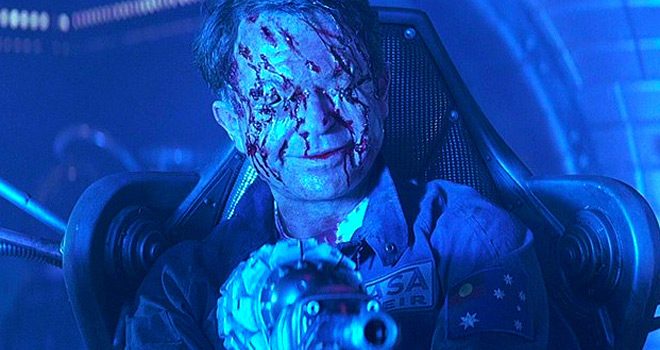 Most critics praised its visuals, the cast, Anderson’s direction paying homage to films like 1979’s Alien as well as 1980’s The Shining and especially its production design along with moody atmosphere while feeling that the third act is anti-climactic with many questions remaining unanswered. Critics aside, and despite all its shortcomings, Event Horizon is a great Sci-Fi/Horror flick that continues to freak people out even after twenty years. 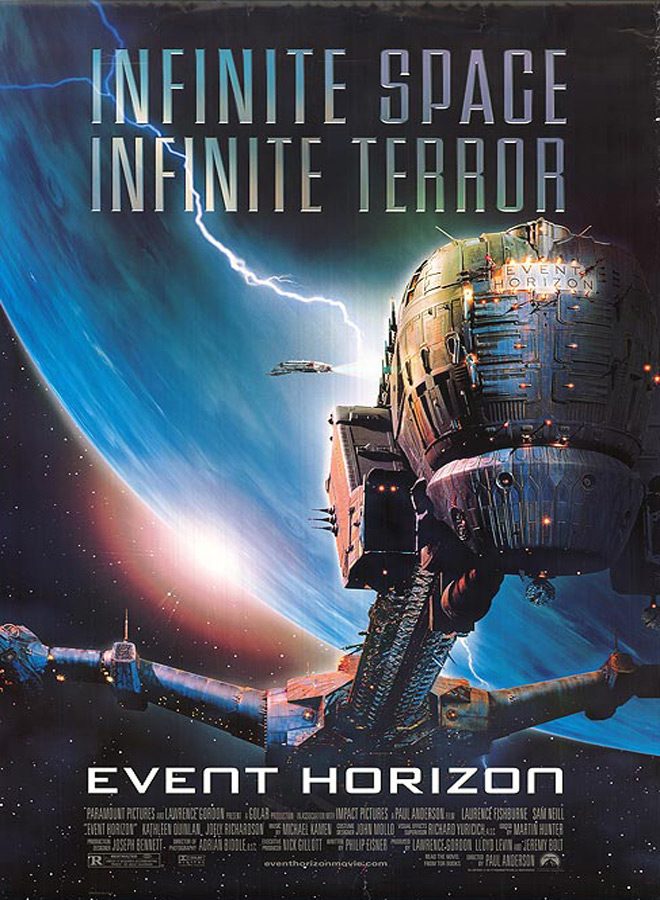