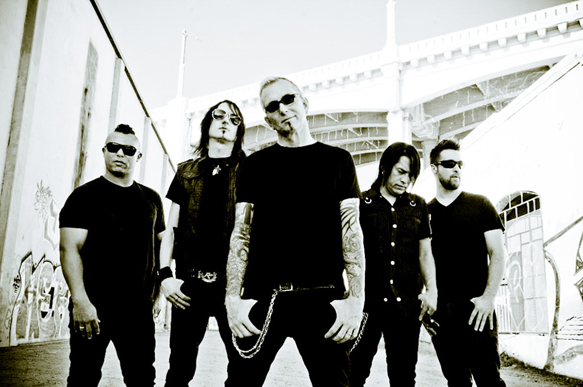 Everclear came on the scene in 1992 after frontman Art Alexakis came through the other side of broken home lives, the tragic loss of his brother George, several moves, attempted suicide, among other obstacles.  With songs he had written while with his former band, Colorfinger, new bass player, Craig Montoya, and drummer, Scott Cuthbert, they named their new band after the alcoholic grain drink Everclear.  They started by playing in a friend’s basement, bartering for recording time.  Nonetheless, the time bore two releases, the Nervous & Weird EP and the full album, World of Noise, by Tim/Kerr Records in 1993. In 1994, Everclear was picked up by Capitol Records by Gary Gersh, who signed the likes of Nirvana and Sonic Youth to DGC Records.  However, they lost Cuthbert just before signing, and former Jolly Mon drummer, Greg Eklund, joined up before the release of 1995’s Sparkle and Fade. As the first of their platinum selling career, 1997’s So Much for the Afterglow would become an international mega hit with songs like “Everything to Everyone,” “I Will Buy You a New Life,” and “Father of Mine.” While the last twenty-three years has seen line-up changes, Alexakis has kept Everclear going strong through the good and bad times and become one of the most recognized names in Rock-n-Roll. Maintaining a steady lineup in the new millennium with Dave French (lead guitar), Josh Crawley (keyboards), Freddy Herrera (bass), and Sean Winchester (drums), Everclear return with their ninth overall studio album Black Is The New Black. Armed with a new record label, The End Records, the album was co-produced with Carson Slovak and Grant McFarland with Alexakis, who has produced every other Everclear album before, in a studio owned by the band LIVE, with Alexakis tracking the vast majority of the guitars himself for the first time since 2003’s Slow Motion Daydream. A rocker through and through, Alexakis stated ““We are really excited to be on The End Records. There is such a buzz of enthusiasm there for our new album, Black Is The New Black. It’s an unapologetic Rock record that I feel combines the best of classic Everclear with contemporary production and what I feel is some of my best songwriting in years!”

Black is the New Black thrusts ever forward Mach 2 with a power ballad thrown in followed by two hard rocking tracks to bring the eleven track album home, loud and proud.  Kicking the fun off is “Sugar Noise,” which is driven with a Jimi Hendrix-esque Funk riff which carries throughout the piece as Alexakis weaves his story of getting lost in the world of drugs, “waking in a dead person’s car.”  Whether the dead person’s car is someone else’s or he died in his own car is up for interpretation.  Although fictitious, Alexakis’ voice has the urgency of knowledge of the life. Next, “The Man Who Broke His Own Heart“ is a hard-edged, guitar grinding, bass-laden anthem that covers the whole gamut of youthful confidence, the fall, the finding of self, and the return of confidence.  An inspiring track, Alexakis’ vocals are a middle finger to the naysayers. “American Monster” begins with a thundering bass beat akin to Black Sabbath’s “Iron Man” until the guitar slices through, sounding like a siren.  Lyrically, the song tells the story of the drug epidemic in America…from the drugs’ perspective.  It warns, “to run,” or death is waiting…”I’ll be the last thing you ever see.”

Moving along, “Complacent” harkens back to “Father of Mine” days in the opening beats with sharp guitar strokes.  Another confessional piece, it follows Alexakis’ broken childhood, through his rebellious, drug-fueled, suicidal young adult life, and finally the mature, self-aware adult he is now. Directly following, “You” has the patented riff stacking on display as Alexakis’ willingness to let himself be vulnerable shines.  The hard drums dominate, accompanied by the cutting guitars, and seem to want to show the scars Alexakis sings. Bringing on a Pop flare is “This is Your Death Song,” complete with voice reverberations, juxtaposed with dark lyrics of a person breaking a relationship, saying he “just wants to left alone,” and that he will be better “someday.” Flowing like a storybook, “Simple and Plain” is just that, and Alexakis’ declaration that “he’ll never change.”  By the end, he challenges others to become the person they are meant to be. Then, on “Anything is Better Than This,“ the band brings a cacophony of structured sound to play against the lyrics of Alexakis’ hatred of previous addictions earlier in his life.

Keeping the album balanced, “Van Gogh Sun” is Black Is The New Black’s power ballad in Everclear’s trademark beats and melodies with a slight Ska undertone.  In this track, Alexakis reminisces on life, that he is in a good place, and that he wishes someone he cares deeply for can join him, confessing he will “never give up on you.” Then “Pretty Bomb“ has a fun ’90s vibe with a driving beat speaking directly to the outsiders of the world saying, “Pretty on the inside,” and “This will all make sense someday.” The final track, titled “Safe,“ has shades of Nirvana’s “Heart Shaped Box” peppered through the melody, broken with that hard drumline that goes through the album, and a hard ’70s Rhythm & Blues guitar solo riff.  In this finale, Alexakis pleads to be beloved, cared, and safe in an unsafe world.

Although Alexakis admits the album as a whole is dark contrary to saying he is in a good place, being clean-and-sober twenty-five years, he cannot help but let some of that shine through with silver linings in songs like “The Man Who Breaks His Own Heart,” “Complacent,” and “Simple and Plain” with a mature modern back to basics without being repetitive…just a ball-to-the-wall, unapologetic ride into Everclear’s psyche. They are currently in Australia on tour before taking part in the Summerland tour with Toadies, Fuel, and American Hi-Fi starting June 11th.  CrypticRock gives Black Is The New Black 5 of 5 stars. 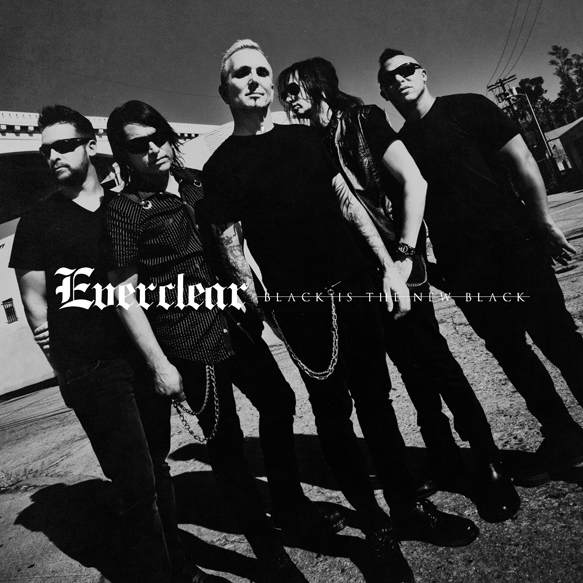 Purchase Black Is The New Black on Amazon & iTunes