Evergrey – The Storm Within (Album Review)

Celebrating their twentieth anniversary in 2016 as an established band, Sweden’s Evergrey seem to always be pushing the boundaries of what they create. Debuting with 1998’s The Dark Discovery, albums such as 2001’s concept piece In Search of Truth, 2003’s Recreation Day, and 2006’s Monday Morning Apocalypse are just a few of their efforts which show diversity, growth, and a flair for the unexpected. Then, in 2014, came their Hymns for the Broken, an album that more than likely has not left the players or playlists of many listeners, and is arguably one of the top Progressive Metal albums of the last decade. Now, just two years later, they return with an impressive all-out assault on the eardrums with their tenth overall studio album, The Storm Within. Released on September 6, 2016, the lineup remains unchanged from their last album, led by Tom S. Englund (vocals, guitar), with Johan Niemann (bass), Rikard Zander (keyboards), Henrik Danhage (guitar), and Jonas Ekdahl (drums). Their second release under AFM Records, the Gothenberg Prog-Metal quintet charge forward with strength and energy.

While Hymns for the Broken had a clear storyline, The Storm Within has a definite theme. It is one that listeners all can relate to, the concept of a love lost. Whether through death or parting, it remains typically dark, atmospheric as well as melodic, it has more of an urgency about it, and at times it is more uplifting than oppressive. That in mind, there is vitality and passion that will invigorate listeners while the musicianship is simply fantastic. One could say Evergrey has really come together as a band, and no doubt their time on the road has cemented the bonds between members since the last recording together.

Beginning with the first single,”‘Distance” does not deal with a love divided geographically. Here, the distance is more figuratively speaking, with relentless guitar riffs and the hypnotic huge vocals that are characteristic of Evergrey’s style. Then, “Passing Through” is more retrospective while looking forward, still with meaty guitars and pounding drums, a powerhouse of sound. In contrast, “Someday” has an epic chorus that will be a huge crowd-pleaser, a sing-a-long anthem for the live shows, with tender moments giving way to soaring guitar solos and vocal highs.

Racing along, “Astray” has a dynamic wealth of sound, layers of keyboards over waves of guitars, that will leave the listener euphoric. Then there is “The Impossible,” which is touching, beautiful as well as symphonic, heavily piano-led, and a direct contrast from the fast and furious “My Allied Ocean,” which gallops at breathtaking pace. Making a guest appearance, Nightwish’s Floor Jansen steps in to lend her vocals to “The Orbit,” creating an enthralling and impassioned duet that will grab the listener’s attention. The voices of Jansen and Englund work deliciously together, and it is destined to be a fantastic future single. Next comes “The Lonely Monarch,” reflecting the one-sidedness of relationships at times and how being with someone can feel very alone when it is the wrong people who are together.

Speaking of good relationships, it is Englund’s own wife Carina that joins him on “The Paradox of the Flame,” creating a softer, more sensual ballad with sympathetic and stirring orchestration. It has a plaintive echo to the chords, giving a sense of heartbreak to the song. Much harder-hitting, “Disconnect” is feisty and haunting as choral backing builds, along with fierce drumming and an intensity that is impossible to ignore. Lastly, the title track, “The Storm Within,” has an underlying epic feeling that carries listeners along to the final notes.

When Evergrey do a “love” album, it is not some sentimental, soppy, teen-angst, shallow offering; it is dark and forbidding, full of bitterness, regret, reflection, and lament. At some point in everyone’s life, they all deal with loss of a loved one. Thus, songs such as these reach out to them and relate to them as if entering their own worlds. Not as immediate as Hymns for the Broken, The Storm Within is infectious and will slowly take the audience over till they succumb to the desolation of emptiness that lies within these songs. An album well-worth picking up, it is something Evergrey should certainly be proud of. It should certainly satisfy their fans, and is a great way to celebrate twenty years of music. CrypticRock gives The Storm Within 5 out of 5 stars. 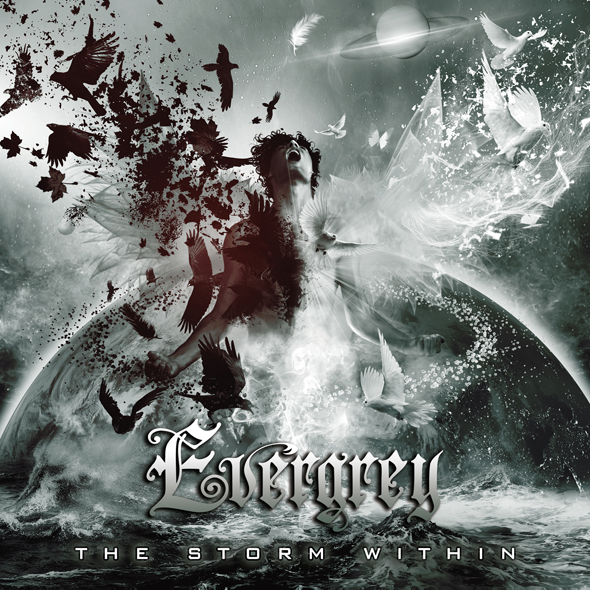