After the success of 1981’s The Evil Dead, young Director Sam Raimi revisited his vision for a remake sequel, simply titled Evil Dead II. Determined to raise the bar and give the audience a higher quality of its predecessor, the result was sharper, smoother, and more comical. Being a huge fan of slapstick humor, such as The Three Stooges, Raimi focused the main premise to be just that, while also possessing a dark and creepy vibe. Thirty years later, that idea still runs strong today, sparking a slew of projects in its wake that have captured the attention of a whole new generation. 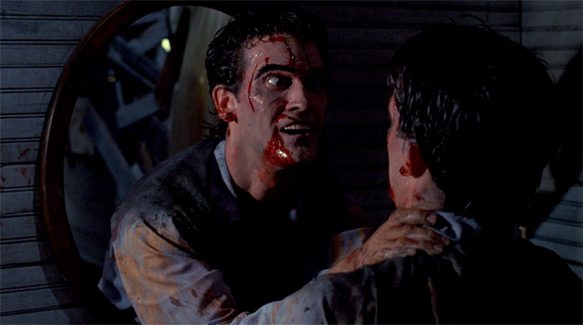 Before they can get too comfortable, Ash finds a tape recorder and instinctively plays it. Listening to the voice of the previous owner, Professor Raymond Knowby (John Peakes: Cold Case TV series, 6 Souls 2010), he talks about his latest discovery, the Book of the Dead. He reads aloud incantations which unleashes an evil force that immediately torments the unsuspecting couple.

Meanwhile, the professor’s daughter, Annie (Sarah Berry: C.H.U.D. II: Bud the Chud 1989) is en route to her parents cabin to help continue her father’s work on the Book of the Dead. Her and her entourage walk into a chaotic situation, quickly fall victim to the evil that now surrounds them, creating a demonic possession adventure like no other. 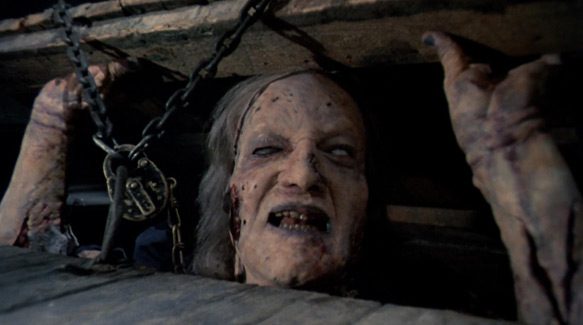 One of the many qualities that made Evil Dead II so appealing was the fact of having very little downtime. Unable to retrieve the rights of the original footage, Raimi and Scott Spiegel co-wrote a whole new opening scene and storyline, where the evil is released approximately seven minutes into the film, and the fun continues straight through to the end. There were some doubts of Campbell carrying a majority of the movie by himself, but he flawlessly pulled this off. One of the most memorable scenes was him battling his possessed hand, beating himself up to the point of slamming plates on his head and flipping himself onto the ground, a scene that is downright hilarious.

This time around, the team had a much larger budget at their disposal, and as a result, the special effects were more on point; using puppetry, camera tricks, as well as stop motion animation. The head designer was Mark Shostrom, and had help from his team, a young Greg Nicotero, Howard Berger, and Robert Kurtzman. Together, they created some brilliant works of art. Interestingly, a few of which they had to come up with last minute as per Raimi, working around his humor, included his “storyboards,” which consisted of stick figures and basic doodles appeared drawn by a child.

The most involved was the costume for Dead Henrietta, played by Ted Raimi. He endured a full body costume, covered from head to toe, which he would completely overheat in. The makeup crew recall in behind the scenes footage how much sweat would pour out when it came time to remove the costume. Viewers can actually see this briefly in the film, what appears to be liquid pouring from the Deadite’s ear when turning to look at Ash. 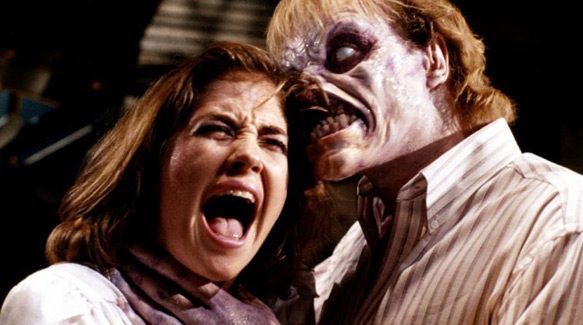 When the other actors had to perform being possessed, they actually had to do it more than once, with and without the signature white contacts. Once they were put in, they were basically blind, and were often guided by off camera crew on where to go. One hilarious scene is when Ash is possessed for a second time and attacks Jake (Dan Hicks: Darkman 1990, Spider-Man 2002). He appears to grab his face, but is clearly trying to feel where he is when you look closely, only adding to the humor within the film.

Another upgrade for the crew was working in much better conditions. That said, the set of the cabin was redesigned in the gymnasium of JR Faison Junior High School, located in Wadesboro, North Carolina. Fortunately, set designers were able to recreate the cabin from the original, making it hard to tell the difference. They were even able to add a few props seen in The Evil Dead such as the clock, and most importantly, the tape recorder.

Moreover, there were many scenes in Evil Dead II involving blood spewing everywhere, a signature move this franchise now possesses. Believe it or not, to avoid an X rating, it was suggested that the crew use multiple colors, pink, green, yellow, and even black. The tactic did not necessarily make sense, but worked really well for the comedic factor. 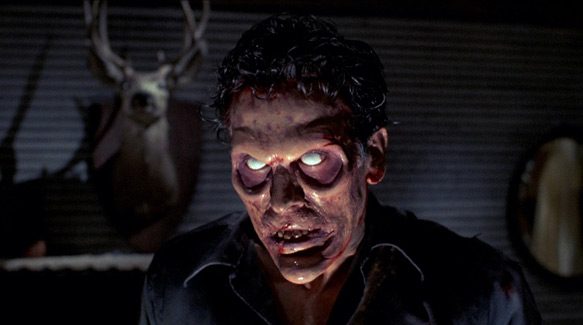 While Evil Dead II was not terribly successful at the box office during its opening weekend, a little over a month later, the film grossed nearly six million dollars in The States alone. Needless to say, the film rapidly picked up a cult status that only grew through the years via home video release. A thoroughly fun movie that has it all – gore, thrills, and a ton of laughs – Evil Dead II is one of the better Horror sequels to come from the ’80s era.

There is no question the unique humor of Sam Raimi’s shines in Evil Dead II, and long time friend Bruce Campbell was the perfect candidate to help create this vision. Many projects would follow throughout the years, including 1992’s Army of Darkness, 2013’s remake Evil Dead, as well as a musical currently performing in Las Vegas, Nevada, and a successful Starz series, Ash VS. Evil Dead, which is now going into its third season. While nothing will quite match the content of the the original film, Evil Dead II continues to swallow souls even after 30 long years. 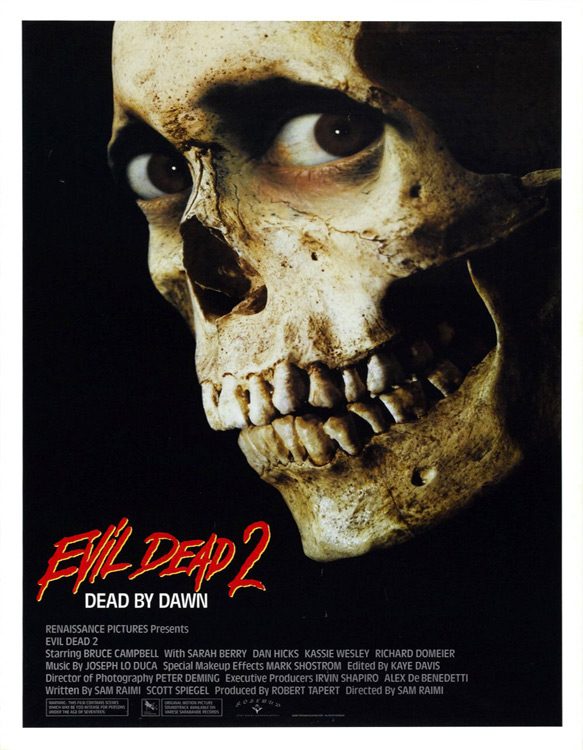