“I know now that my wife has become host to a Kandarian demon. I fear that the only way to stop those possessed by the spirits of the book is through the act of… bodily dismemberment…” speaks a recording, setting the tone for a long and eerie night for a few young adults on spring break. The torturous events they encounter thereafter opens up a world of darkness and pure evil in the low budget 1981 Horror flick known famously to all as The Evil Dead. 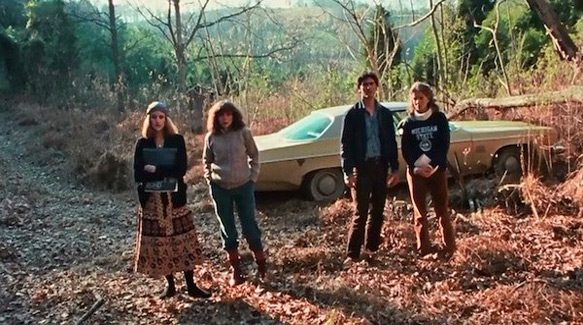 In a cabin in the woods of the Tennessee mountains, Ash, (Bruce Campbell: Army of Darkness 1992, Ash vs Evil Dead TV series) his girlfriend Linda (Betsy Baker: 2084 2009, Lake Eerie 2016), Ash’s sister Cheryl (Ellen Sandweiss: Satan’s Playground 2006, Ash vs. Evil Dead TV series), their friend Scotty (Richard DeManincor: Crimewave 1985, Ash vs. Evil Dead TV series), and Scott’s girlfriend Shelly (Sarah York: Oz the Great and Powerful 2013, Dangerous Women TV series) celebrate their spring break when they come across an old reel to reel player in a cellar. Curious, they play it (American Movie Classics host Bob Dorian was the voice), and it tells of the finding of the Book of the Dead. Suddenly, the tape fast forwards, and stops on incantations. Can the group figure out how to stop the spirits set free before they are all possessed, or are they doomed to be one of the damned?

Friends from high school, Director Sam Raimi and first time Lead Actor Campbell set out to make their first movie in their college years, which would eventually hold the title The Evil Dead, an iconic movie of the Horror industry recognized today. With its mix of Dark Comedy and extreme gore, The Evil Dead became a must-see. Initially premiering in a small amount of theaters on October 15, 1981, word of mouth spread rapidly and The Evil Dead took off like a demon possessed. One of a kind and so over the top, it has since become a legendary favorite still celebrated 35 years later.

Throwing caution to the wind, Raimi went balls to the wall, going into then titled Book of the Dead, taking his vision and what he had learned from experimenting with his Super 8. However, Executive Producer Irvin Shapiro suggested the title change of The Evil Dead to prevent audiences from associating the film with literature, leaving that arena to the legendary Master of Horror, Author Stephen King.

Raimi called on friends to cast the project with the lead going to Campbell as Ash Williams. Tom Sullivan, who had done makeup on 1978’s Within the Woods joined the crew. This could be a blessing and a curse, because friends know each other, making the work environment relaxed; however, that same relaxed atmosphere can become lax as far as caution…hence, an incident where a cameraman slipped during filming, knocking several of Campbell’s teeth out. Nowaday viewers could also see the inexperience of the actors in the the over the top acting, making comedy where not intended. 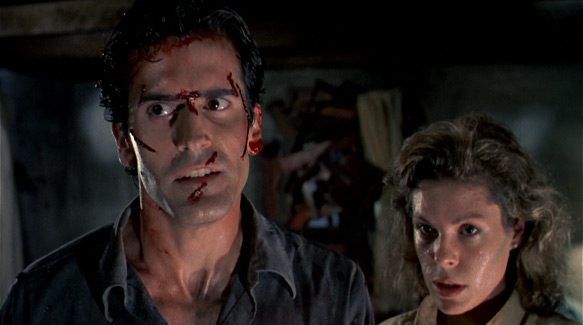 Like many a movie before and many a movie after, communities ran cold to the idea of a Horror film being shot; lest, it ruin their reputation, so by default, Morristown, Tennessee was the place, because Tennessee was the only choice open to the idea. There, they found an abandoned cabin that was the film’s main setting, wound up being the thirteen crew’s motel, makeup trailer, and set for the two month shoot from November 1979 to January of 1980.

On location shooting has always helped the believability to evoke mood in film, a sentiment that holds more weight for the Horror genre. From the woods the cast ran through in which Campbell twisted his ankle during a running sequence to the actual cabin, helped the authenticity of the film. The woods were so dense, the crew got lost going to the cabin. Being winter, the weather was frigid, further helping the believability. Then, principal finished, but it would be another year and a half before the film would release, because editing became a chore.

Edited over again, the original cut was 117 minutes from a 65-minute script. Then, Ruth Paul and Raimi whittled it down to the more theater-friendly 85 minutes, and still received an X-rating (NC-17 nowadays) when it was released for public consumption for its ultra violence and gore Raimi was intentionally going for, making it persona non grata to mainstream theaters. Now, the thing with films that receive X-ratings is there are the director’s true version. Although, due to studio pressures, the director and editor are forced to trim it down to a ghost of itself to make the marketable R. 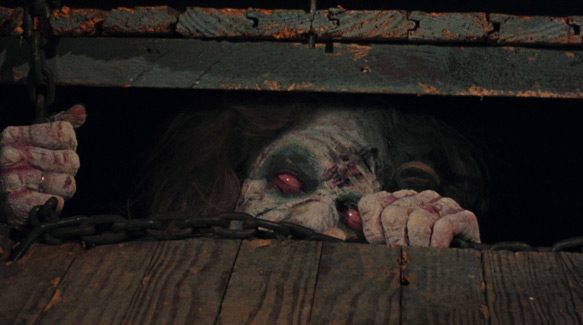 After edits, The Evil Dead still was an X rating; however, when author Stephen King saw the film, The Evil Dead practically got the seal of approval, and was soon after on critics’ radars. When audiences got a hold of The Evil Dead, the film made an estimated $2.4 million worldwide despite not doing as good domestically and being banned in a few countries for said violence and gore. The type of film that many European teenagers shared illegal copies of, it in essence began the term the “number one nasty.” The film continued its cult trajectory in 1983 and again subsequently via home video releases throughout the years.

Since its original release, The Evil Dead has become a staple in the industry, and is very much alive and relevant today. The mythology continued with 1987’s Evil Dead 2: Dead by Dawn, 1992’s Army of Darkness, and the 2013 remake, Evil Dead. It also branched out into a musical play in 2006 in various locations, the Tommy Wind Theater in Las Vegas, NV still showing it to this day, officially celebrating four years. It has shown Comedy and Horror could go hand in hand, one of the latest examples being 2012’s Cabin In The Woods.

With a strong market involving toys, as well as Comics, and the more recent successful Starz TV series Ash vs Evil Dead is proof there is no stopping this franchise. Capturing the attention of a younger generation of excited viewers, 35 years after commencement of the story, The Evil Dead is a Horror phenomena. Demons, boomsticks, and books of the dead, when it is all said and done, The Evil Dead is still as groovy as ever. 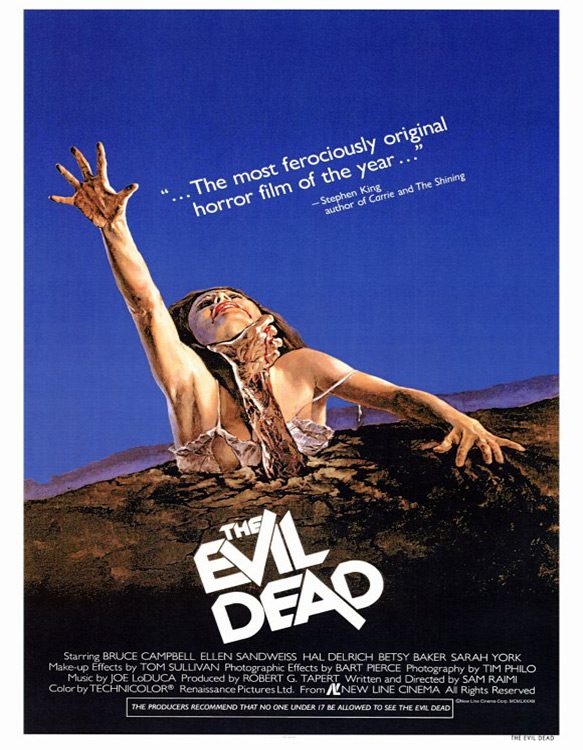