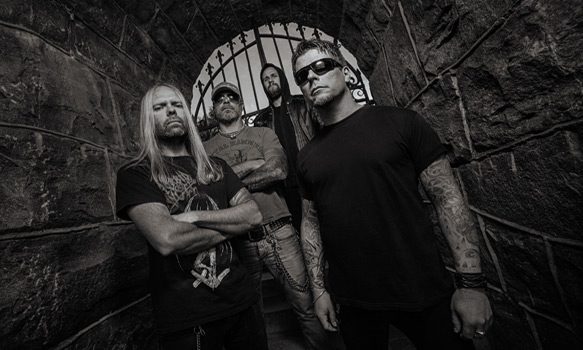 After a five year gap between records, Evocation finally returns to the Death Metal scene with a new feel and enhanced sound on their latest album The Shadow Archetype. Hailing from Borås, Sweden, Evocation has been in and out of the scene for the past 25 years.

Getting their start back in 1992, releasing The Ancient Gate demo, then they promptly disappeared. For 12 years remained silent, but made a comeback in 2005 working towards the release of proper debut album, 2007’s Tales from the Tomb. Striking the iron while it was hot, rapidly they dished out 2008’s Dead Calm Chaos, 2010’s Apocalyptic, and the latest 2012’s Illusions of Grandeur prior to another episode of silence.

Almost disbanding completely after the departure of long time members Janne Kenttäkumpu (drums) and Vesa Kenttäkumpu (guitars), instead they return home to come up with a strategy to continue creating powerful music. Calling upon Guitarist Simon Exner (formerly from As You Drown) to continue on their chosen path, he brought with him new ideas and a different perspective to the creative process. That fact in mind, The Shadow Archetype may have a slightly different feel then from what fans may be expecting, but that is not a negative thing at all.

Setting out to create magic with Per Møller Jensen on drums, Marko Palmen on the guitar, Gustaf Jorde rocking the bass, Exner on guitar, and Thomas Josefsson shredding the deep vocals, it took two years and three studios to make The Shadow Archetype happen. The usage of different studios covered various parts of the process, blending the songs together for a superb listening experience. Backing vocals, mixing and mastering were done at Dugout Productions, drums were recorded at Crehate Studios, while guitars, bass, and lead vocals were recorded at the band’s personal studio, Acacia Avenue Recordings. Now seeing the light of day on March 10th, The Shadow Archetype marks Evocation’s second release with Metal Blade Records and the first exclusive release with this label worldwide. But the big question in mind is, was the long wait worthwhile?

Ready to answer the call, “Into Ruins” sets the tone with a jarring instrumental beginning. The heavy yet slow and powerful guitar focused track may be a quick listen. but will definitely catch listener’s attention. Next up “Condemned to the Grave”has solid start with pounding drums matched with heavy vocals about death and punishment. This pointed out, many of the songs on The Shadow Archetype have similar themes following a narrative. The theme set, the band felt the album should take a step back from the typical blood gore and horror theme, edging toward observational takes on the current world while keeping a darker focus.

This said, “Modus Operandi” beings slowly before  leading up to an intense drop once again focusing on gloom and despair. Then “Children of Stone” brings a doomy mournful tone about life filled with suffering.

The next few tracks focus on the concept of good versus evil with much talk of Lucifer and burning punishment. For example, “The Coroner” creates a sensation of the soul turning to darkness and flame, all while showcasing intense solo guitar and a throbbing drum beat. Not to be excluded, title-track “The Shadow Archetype” is a song derived from Swiss psychologist Carl Gustav Jung’s theories on psychological archetypes. Equally punishing as the previous songs, it details annihilation, death and deceit.

Offering a sudden change in tone, “Blind Obedience” launches with a gentle melodic followed by a positive message that good triumphs over evil. Mostly instrumental, and definitely the softest piece on the album, it is the perfect way to blend the remaining songs into the story. These include standout track “Survival of the Sickest” fit with a very heavy feel and layered instrumentation which creates intense melodies over heavy bass before the superb “Sulfur and Blood.” This theme of filth, blood, and death is revisited on the final two tracks, “Imperium Fall” and “Dark Day Sunrise.”  The first of the final two, “Imperium Fall” picks up the pace before introducing the concept of beasts and tyrants. Lastly “Dark Day Sunrise” offers a foreboding beginning best described as a burning empire of light, betrayal, and sacrifice

The melding of concepts genuinely make Shadow Archetype feel like a storybook. It is well blended and the two years spent planning are extremely apparent. Featuring plenty of new dynamics, longtime Evocation fans can brace for an album that was well worth the wait. For this reason CrypticRock.com gives Shadow Archetype 4 out of 5 stars. 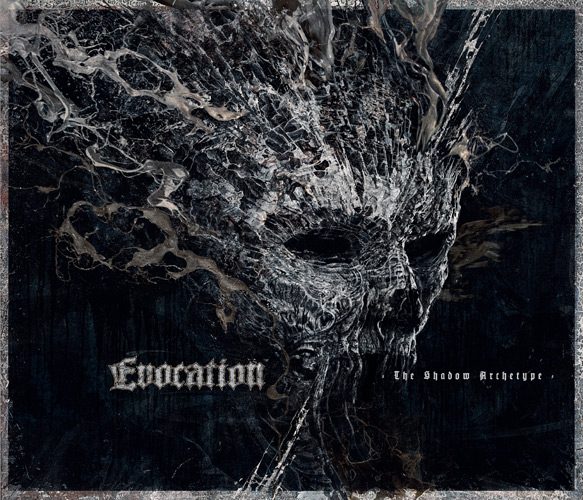