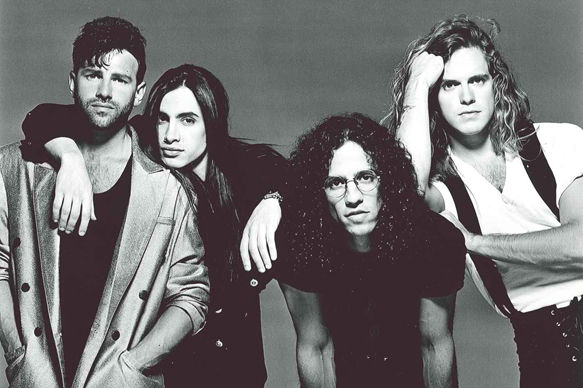 Breaking into the music business is hard for any band, and most never even make it. For Boston, Massachusetts-based American Rock band, Extreme, their dedication to playing live built them a strong local following, and four years after forming, they were on the map with the single “Play With Me,” from their self-titled 1989 debut album. Then, the decade closed and 1990 came rolling in. It was around this time many bands from the ’80s era began to slowly fade with the changing of the guard in Metal from less Glam to more Grunge, but Extreme were on the verge of their biggest breakthrough when they released their  Extreme II: Pornograffitti on August 7, 1990. A concept record of sorts, it would quickly become one of the biggest albums of the year, and in 2015, the funked up fairytale celebrated its 25th anniversary.

With the lineup of Gary Cherone on vocals, Nuno Bettencourt on guitar/piano/backing vocals, Pat Badger on bass/backing vocals, and Pat Geary on drums, Pornograffitti made Extreme a force to be reckoned with. Coming out relatively quickly following Extreme in March of 1989, Pornograffitti is Extreme’s most successful commercial album to date, going double-platinum in the US with the album taking the spot of 10 on the Billboard 200. Initially releasing “Decadence Dance” as the lead single, to modern success, it would not be until March of the following year that the band would rocket to number 1 in the Billboard Hot 100 with the ballad “More Than Words.” Seeming to have found an audience bigger than ever before, September of 1991 saw the release of single “Hole Hearted” rise to number 4. A ballad and folksy-flavored song respectively, it received extensive play on MTV and VH-1 while “Decadence Dance” and “Get the Funk Out” broke the Billboard Rock Chart.

Music-wise, Pornograffitti is chock-full of hard riffs with choppy, Funk flavored melodies listeners dug with exception of the aforementioned “More Than Words” and “Hole Hearted.”  Nuno’s guitar play was such that it earned him accolades in many guitar magazines through 1990 and 1991. The story the album tells tackles themes that riff on America’s glorification of sex, money, excess, and general decadence while still trying to stress the importance of love and relationships. Leading the concept is “Decadence Dance” with ambient thunder and a rainy piano as Mutha is voclaized by Barbara Glynn, warning the character Francis to be careful.  Then, the drumroll builds to a squealing riff of temptation, and Francis is lost.  As the track continues, it has a sexiness to it that one could place themselves in the story.  Also, everybody is tempted by something or someone sometime and  “Li’L Jack Horny” has an innocent intro like Francis is walking the city streets, taking in the sights doe-eyed…until the Funk riff swings in, accompanied by Li’L Jack’s horns.  Here, the band takes analogies from nursery rhymes to mold this serious tongue-in-cheek piece about falling into the sex game…and losing.

Furthermore, everybody always says, “When I’m President.” So does Extreme as they meld Funk, Metal, and Rap in a another tongue-in-cheek way, riffing on then president, George H. W. Bush, going so far as to imitate his voice.  Then there is “Get the Funk Out,” which plays on the upbeat Jazz with the bass and brass featured heavily as the band uses reverse psychology, tempting by saying they are not going to force feed said temptations. Then, almost midway through the album, the band pulls a 180 with “More Than Words,” a sweet acoustic piece, but what they did was take a sweet melody, and put some harsh words to it, putting whoever on blast by saying actions speak louder than words.

Midway through  Pornograffitti, “Money” returns the Funky Metal with a voiceover telling Francis to remember to put his tooth under his pillow for the tooth fairy. Greed and the religious-like adoration of the “almighty dollar” gets riffed on in this track…even ending in a sarcastic, “Alleluia.”  Moving on to “It (‘s a Monster),” the band sings of sex addiction through this funky piece.  By putting their messages to funky, upbeat melodies, they turn the message on its ear by not being preachy, but weaving it into the catchy tune.  “Pornograffitti,” the album’s title track, makes no bones about the theme of the track as “Sex” is yelled out at the very beginning.  This rocker has the Funk vibe that flows throughout most of the album as they riff on the pervasiveness of blatant sex in all media.

Then, “When I First Kissed You” is another tune turned on its ear by putting soft, sweet music juxtaposed to harsh words of a pimp getting in the head of his trick, saying he is the only one who will truly love her.  Then there is the cut “Suzi (Wants Her All Day What?)” which is about a hooker in this Metal tune bordering on telling too much information.  The speed guitar of guest Dweezil Zappa brings in “He-Man Woman Hater,” another funkified track with a breathtaking solo as Francis is learning the women of the streets aren’t where to find love. “Song for Love” is truly a power ballad with no pretense, just clean riffs and vocals before “Hole Hearted” closes the album in a hard, folksy, acoustic way, ending the story with hope and maturity. Interestingly enough, “Hole Hearted” was excluded from the LP edition of the album, making it only available on CD and cassette.

Extreme II: Pornograffitti cemented Extreme’s place in Rock history, taking a chance on a concept album that tackled controversial topics head-on, seriously and tongue-in-cheek, then and now. In celebration of the records twenty-fifth anniversary, Extreme partook in a tour throughout Europe, along with some North American dates in 2014 into 2015, playing the record in its entirety. In addition, earlier in 2015, A&M released a special two disc deluxe edition of the album featuring remixes, B-sides, edit,s and acapellas, including four versions of “More Than Words.” With all that said, Extreme II: Pornograffitti is a fun Rock record that has stood the test of time for twenty-five years strong. 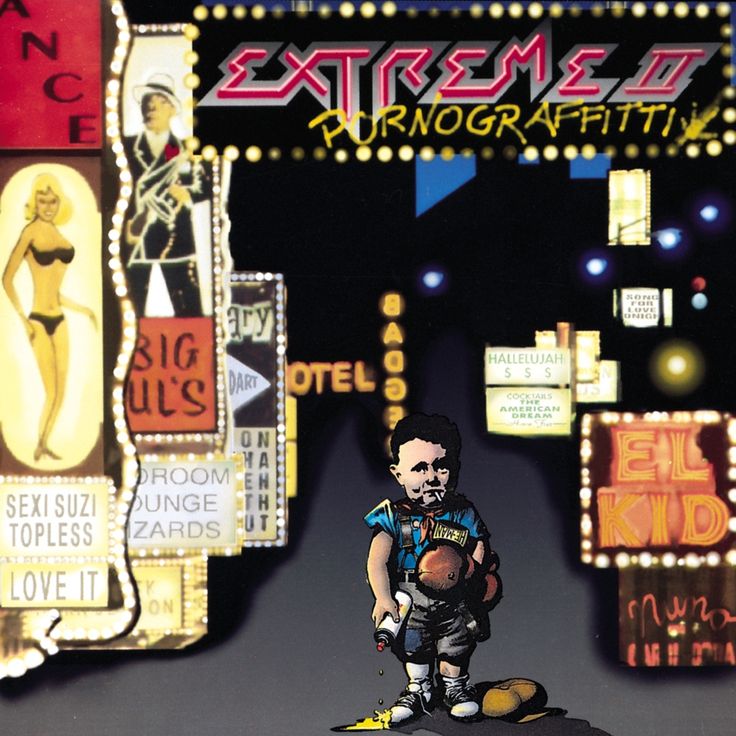