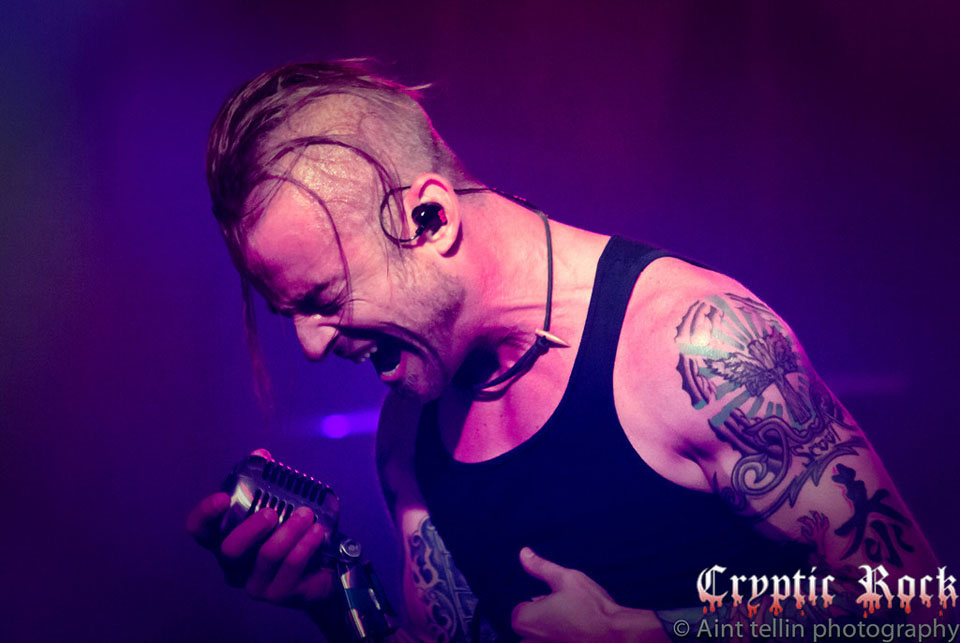 One of today’s hardest working hard rock bands Eye Empire came to Revolution in Amityville, NY Sunday September 29th.  A large crowd for a Sunday evening gathered to watch a line-up of rock including opening sets by Charetta and True Becoming.

Starting out the evening was female fronted hard rock act Charetta.  Based out of New York the band has been playing since 2007 throughout the tri-state area.  They released their debut album Defying The Inevitable in 2009 produced by Brett Hestla (Creed, Dark New Day).  Through the years, the band has honed an aggressive hard rock sound lead by the emotional vocals of Angelina DelCarmen.  Now on the night they open for Eye Empire they are celebrating the release of their new EP Apocalypse.  The EP was recorded right here on Long Island by Mike Watts (Story of The Year, Theory Of A Deadman).  Friends, family, and a growing fan base gathered early to help in celebrating the release of Apocalypse.  As the band performed the new material it proved to be some of their most powerful to date.  With heavy grooving guitars, aggressive sound and powerful vocals Charetta’s performance was a well-received opening for the evening.

Next up was heavy rockers True Becoming from Mt. Carmel, Pennsylvania.  True Becoming are another fast rising independent rock band ready to make some noise in the sense.  They have an aggressive hard rock sound highlighted by catchy hooks and emotional vocals.  Consisting of Rich Allen (vocals), A-A-Ron (guitars), Clint Souder (guitars), Damian Dall (bass), and Chris Judge (drums) True Becoming has been known to put on an electrifying live show and Revolution was about to find out.  As the band hit the stage, they rocked out a series of powerful hard rock hits that throbbed in your chest. Allen’s vocals bleed through the speakers with emotion and clarity similar to that of Breaking Benjamin.  Souder and Judge’s bass and drum playing provided the perfect backbone to what would be a kick ass performance.  The crowd came to the show to see Eye Empire and left the show awake to True Becoming.

As the evening wore on fans were ready to see Eye Empire rock their block off.  Eye Empire, together now since 2009, have decided to take the grass roots approach to building a following with constant touring and going out before and after the show meeting every single fan.  With a line-up of professional musicians who have taken their lumps in the rock industry consisting of bassist Corey Lowery (Dark New Day, Stereomud), guitarist B.C. Kochmit (Switched), vocalist Donald Carpenter (Submersed), and drummer Ryan Bennett (Texas Hippie Coalition).  Eye Empire may not be the most popular band in hard rock today but the dedication to live performance every time these guys come around a large crowd of fans gather and stay for the entire set.  As the stock for Eye Empire rises, and more and more rock fans are aware of them, they are now set to release their highly anticipated new record Evolve sometime in 2013.

With the stage warmed up by a solid line-up of openers Eye Empire stormed onto the stage with fury.  Breaking out tracks like “Ignite (Moment Of Impact)”, “Idiot”, and “Great Deceiver” the crowd moved back in forth screaming along every single word. With his vintage style isolated microphone Carpenter’s vocals soared high throughout the entire set. By his face expressions and body movement, you can feel the emotion dripping from the stage as he pours his heart out in the performance.

As the set went on the band highlighted new tracks including “Weakness On You” and “One Day”. Kochmit’s guitar playing was some of the most passionate you will see on stage at any rock show.  Bending strings, hair in face, and sweating rock Kochmit puts on an excellent live performance.  The throbbing bass playing of Lowery and hard-hitting drums of Bennett are the motor that keeps Eye Empire going and shows the band to be a solid cohesive unit.

You would think after 40 plus minutes of music in such a high-energy performance they guys would be tired but you would be mistaken as they marched through to the end with the same endurance. Fans kept up that energy too especially when the band played killer tracks “More Than Fate” and “I Pray”.

Eye Empire are without a doubt one of the best live performances you will see from any hard rock band in 2013.  Their performance is matched by passionate real hard rock.  It will be exiting to see the band take it to the next level with the release of Evolve.

Lacuna Coil – Live From The Apocalypse (Live Album Review)
Like the in-depth, diverse coverage of Cryptic Rock? Help us in support to keep the magazine going strong for years to come with a small donation.
Print page
0 Likes