Beauty is said to be in the eye of the beholder, but can the same be said for justice? Justice is often seen wearing a blindfold, holding scales, and wielding a sword; but is she really as blind, balanced, and retributive as we would like to think she is? While justice appears to be an easy enough concept to grasp, it is often gravely misused and regularly abused by those given the most power to do so; meaning justice, like beauty, is now more a matter of perception and subjectiveness rather than rights and righteousness. If justice is all about getting to the truth, then where does one look to guarantee they are not being fed a lie? The Eyes. 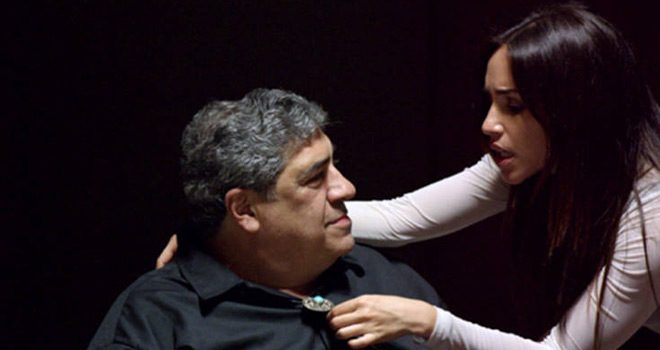 The Eyes is the American Crime/Drama/Mystery/Thriller released on April 7, 2017, via Good To Be Seen Films and Parade Deck Films – which handled the distribution of all US and Canadian media – and can currently be found on VOD, DVD, and streaming on Amazon. The film was wonderfully written by Robert T. Roe (Lunchbox Romance 2010, Rebecca’s Room 2011), dynamically directed by Robbie Bryan (iMurders 2008, Choose 2011), and includes a cast that really put forth their best efforts to breathe life into this story. 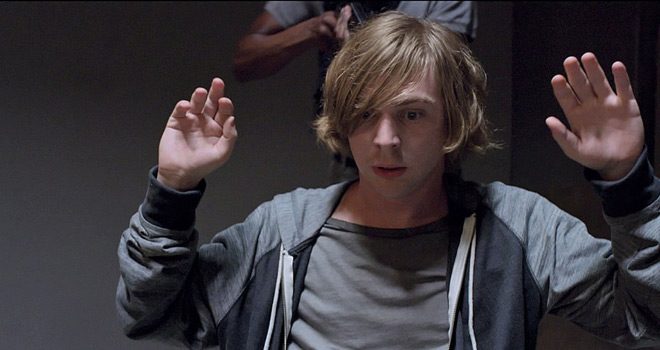 It all begins with a magnificently captured drive through a beautiful, autumn countryside; classical music fills the air, and a charming elegance reveals itself. The afternoon drive continues through the suburbs, but takes a turn into much darker territory as night falls and the car makes its way into the city; ending at an old abandoned warehouse downtown that just reeks of criminal activity. With an opening that leaves viewers feeling isolated and trapped, they are now better able to relate to the six strangers that are unconsciously sitting around a table with their hands tied behind their backs. As they awaken, they are given two hours to interact with one another to uncover the connection they all share that has brought them to this place; and they must also decide which five will die and which one’s life will be spared, otherwise they will all be killed.

The cast was overall a pleasure to watch, but it was Orlando, Florida, native, Greg Davis Jr. who stood out and stole the show with his depiction of Robby the fisherman. His conviction was so strong, which boosted the authenticity of his performance and made it feel so incredibly real; so much so, that he was even able to induce a more visceral response from viewers that mirrored his own. While the combination of performances would have been enough to effectively convey the story, it was that classic Film Noir style that really enhanced the story’s flair and dramatics. 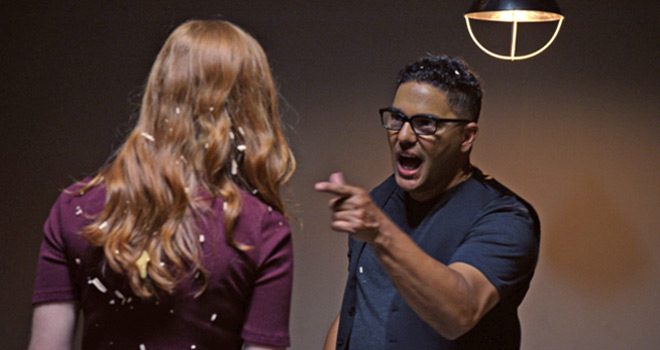 The chiaroscuro lighting created an ambiance of isolation, confusion, paranoia, and fear. The table was brightly lit against the backdrop of complete darkness, which gave the impression that a serious six person interrogation was about to be underway. The only other bright lighting was used to illuminate the spiral staircase, which when combined with its own shadow, created traditional Film Noir bars that somewhat reflected a cage. Rotated shots around the table closed in tight when someone would awaken or speak, which kept the camera in a constant motion and made the movie slightly disorienting and unnerving; but in all of the right ways, especially when paired with a great film score and adequate sound effects.

Ultimately, The Eyes is an interesting Mystery that kept viewers engaged, in spite of its slower pace, and guessing until the very end. Also, the subtle hints and cues that were overlooked in the beginning all start to make sense upon the film’s unexpected conclusion. What this movie lacked in action and special effects, it more than made up for with nonstop sarcastic banter and its rather enjoyable story and ending; which is why CrypticRock gives The Eyes 3.5 out of 5 stars. 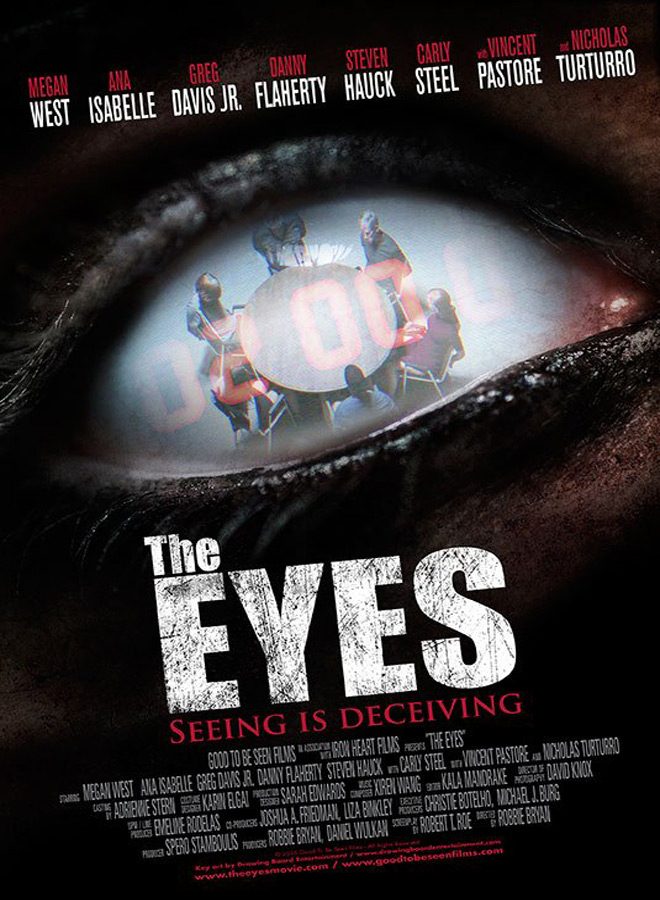 Good To Be Seen Films

Snake Eyes: G.I. Joe Origins (Movie Review) Fear of Rain (Movie Review)
Like the in-depth, diverse coverage of Cryptic Rock? Help us in support to keep the magazine going strong for years to come with a small donation.