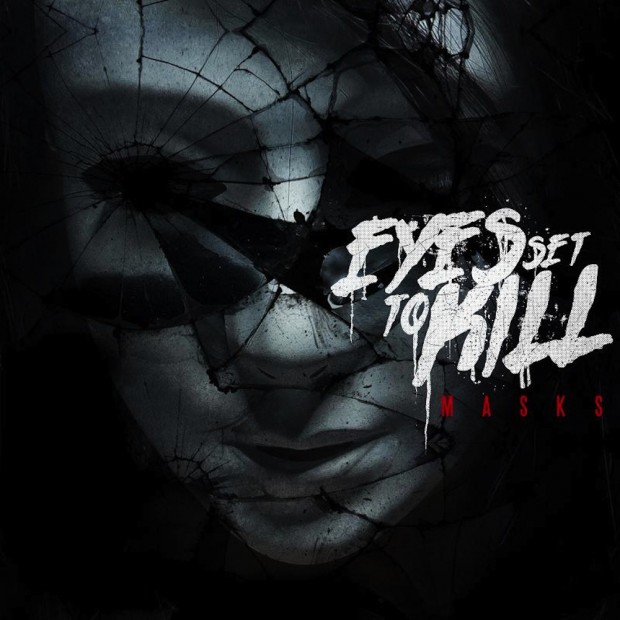 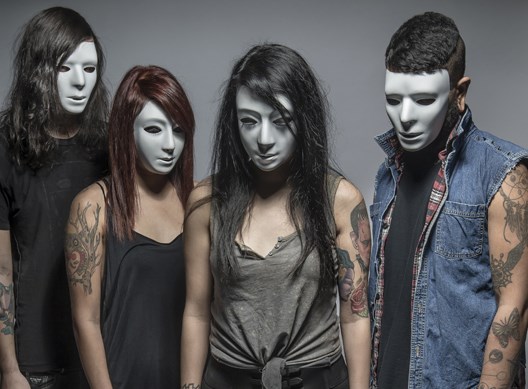 Eyes Set To Kill have made a name for themselves over the past decade in the metalcore scene. After the departure of vocalist Lindsey Vogt in 2007 Alexia Rodriguez took over on lead and has been at the helm since. Sisters by blood and by musical DNA Alexia and Anissa Rodriguez were determined to make their visions become reality. Their debut album Reach (2008) was a success for the band and created a buzz. Wasting no time they followed up with The World Outside (2009). The album took Eyes Set To Kill in a darker direction which helped define their diversity. Keeping up the pace they released their most successful album at the time with Broken Frames in 2010. In 2011 the band released White Lotus which was the first album under the band’s own label Foresee Records. Bringing us to 2013 where Eye Set To Kill have a new label in Century Media Records and new album Masks.

The opening track is in fact the title track “Masks”. Starting things out in a dramatic fashion the track builds intensity from the opening seconds to the end with crunching guitars and emotional vocals by Alexia Rodriguez. Clearly this track is setting up the listener for what is in store over the next 12 tracks on the album. “Killing In Your Name” starts off with a blistering metal riff giving into double bass kick drum. Providing a layered sound of guitars Alexia’s voice bleeds sheer emotion over the top of it all. Being the first full length track on the record we know Eyes Set To Kill are ready to make a statement with Masks. “Lost And Forgotten” keeps up the intensity and is lead by the harsh vocals of Cisko Miranda. There is a level of maturity in Miranda’s vocal approach here which is harsh yet holds clarity. Alexia provides the clean vocals in the chorus making for a great balance. It isn’t until about 2 minutes 30 seconds into the track you are struck by an enchanting soothing vocal by Rodriguez roaring into a ripping guitar solo by Alexia. “Where I Want To Be” showcases Alexia’s diversity in vocals styles. The bass line provided by Anissa Rodriguez is throbbing and adds for a great back bone to this heavy track. “True Colors” is another track lead by Miranda’s vocals. With a full speed ahead approach musically and vocally the band takes us for a turn when Alexia belts out a powerful clear chorus line. The tone of the guitars is magnificent and make for a dark emotional atmosphere. “Surface” is an upbeat energetic metal track showing the talented drum work of Caleb Clifton. Musically similar to the best of melodic death metal this song hits hard. A key element to the track and many on this record is the band’s ability to let the music breath and not force anything. “Little Liar” changes things up a bit providing the listener with a more pop like approach to the music. Keeping the edge hard Anissa’s bass playing throbs within your heart and her subtle keyboard elements resonate in your mind. Catchy vocal lines make this song a winner and a leading candidate for a single on rock radio. “Nothing Left To Say” is one of the more metalcore tracks on the album with screaming of Miranda and fast pace drum beat. The harsh intensity is placed nicely more than midway through the record. This style continues with the next track “The New Plague”. “Infected” is a beautiful track of sound. You will be impressed by the vocal styling Alexia provides from start to finish. You will be singing this for days after hearing it and it’s a clear stand out track. “Secrets Between” picks up the intensity with double bass drums, ripping guitar riffs and Miranda’s sore throat vocals. The beauty of the tracks Miranda leads on is the balance Alexia’s clean vocals bring to the mix. “Haze” utilities a series of effects on Alexia vocals. With sheer emotion there is no auto tuning on this girls voice but merely complimentary reverb and echoes for a blissful atmosphere. “The Forbidden Line” closes out the record with a bang. Miranda and Alexia team up for a final harshness and beauty combination with their respective vocal styles. There are moments of complete chaos giving way to moments of darkness and melancholy style.

Masks is a step forward for Eyes Set To Kill. Clearly a band with a broad range of talents the four piece has created possibly their strongest effort to date. Alexia’s vocals shine throughout the record and Miranda provides us with harshness in his style keeping things interesting. The song writing on the record is top notch with structures emphasizing atmosphere, ability to capture a moment in the music, and sincere emotion. One may say Eyes Set To Kill is ready to take off their masks with this release. There is no need to conform to any genre or style when you have the ability this band does. Masks is a excellent listen for new and old fans alike. There are more than a handful of tracks which can shatter genre borders and lift Eyes Set To Kill to a whole new level. Cryptic Rock give this album 5 out of 5 stars.