June 8, 1992. With their clothing askew, Rap duo Kris Kross and their hit single “Jump” are battling for the Billboard No. 1 Single slot with Funk Punks Red Hot Chili Peppers’ ear-splitting ballad “Under the Bridge.” Soulful En Vogue, caterwauling Mariah Carey, and derriere-loving Sir Mix-A-Lot round out the Top 5 Singles on radio across the U.S. for the week. Enter Faith No More, who, twenty-five years ago, on Monday, June 8th, entered into this Pop-saturated melee with the epic Angel Dust.

Faith No More (FNM) had formed in 1979 in San Francisco, California, the brainchild of Bassist Billy Gould and Drummer Mike Bordin, who originally entitled the band “Sharp Young Men.” A name change, line-up kerfuffles, and two studio albums – 1985’s We Care a Lot and 1987’s Introduce Yourself – would come along before the band’s major, commercial success with 1989’s The Real Thing.

Due to this monumental success, Faith No More were no strangers to radio or the charts back in 1992. Their fourth full-length studio album, Angel Dust, however, ended up a mixed bag as far as commercial success: while it is FNM’s best-selling album outside the U.S. – and went Platinum in much of Europe as well as Gold in Australia – the album did not fare as well domestically. Critical reviews were glowing, though many of the mainstream Rock fans were thrown off base by the highly experimental album. Ultimately, commercial success or no, Angel Dust would prove a launching pad for the incomparable Lyricist/Vocalist Mike Patton, who had been hired into the band at the tail-end of The Real Thing sessions. Consequently, it also spelled the departure of Guitarist Jim Martin, and would be his last album with the band.

On Monday, June, 8, 1992, Angel Dust was born into a schizophrenic music scene that was an all-out-war between Pop idols, Rappers, and the occasional Rock stalwart. From Kris Kross to Mariah Carey, Sir Mix-A-Lot to the Red Hot Chili Peppers, there was nothing at the top of the charts quite like Faith No More. With undeniable Funk and Punk attitude, Faith No More presented a collection of thirteen Experimental Rock tracks, led by the first single/video “Midlife Crisis.” Even the lead-off video was a bizarre experience, with the band’s performance and Patton’s antics all set in blurry, day-glo colors and accentuated with religious iconography, as well as one man being drawn and quartered (ala The Martyrdom of St. Hippolytus). It was, to say the least, an interesting acid trip!

A somewhat confounding experience, Angel Dust ran the gamut from the bass-heavy “Land of Sunshine” to the ominous growl of “Caffeine,” to obvious choice for first single/video, the aforementioned Rap-Rocker “Midlife Crisis.” The bizarrely meandering, largely Spoken Word tale of “RV” collided with “Smaller and Smaller” – highlighting Patton’s impressive, 6-octave vocal range – while second single/video “Everything’s Ruined” had echoes of their 1989 sound. The funereal dirge of “Malpractice” danced deliciously alongside the Rap/Rock fusion of “Kindergarten.” The funktastic, bass assault of “Be Aggressive” (which would clearly inspire Marilyn Manson on his track “mOBSCENE”) led the band into “A Small Victory,” which would make for their third single/video from Angel Dust. “Crack Hitler” was anchored by some phenomenal bass work, propelling the band into the completely insane “Jizzlobber,” which possessed everything from Screamo to church organs. The decidedly calm instrumental “Midnight Cowboy” wrapped it all up with a precarious bow.

From start to finish, Angel Dust was a major departure from The Real Thing’s Hard Rock/Heavy Metal attack. Some fans ‘got it’ and stayed true to the San Franciscans, while others ran for the Pop saturated hills. Angel Dust was, therefore, both a pivotal and polarizing album for the daring Cali quintet: with nothing about the album being universally beloved or loathed. Playing it safe and recording The Real Thing, Volume 2 was never in-the-cards for Faith No More, however, and that is why they are a band who have proudly stood the test of time. In fact, Faith No More are the iconic representation of a band who took a huge gamble, musically, only to achieve cult status. Truth be told, whether they intended to or not, they would influence an entire new generation of rockers who wanted to fuse Rap into their stories, creating the early 2000’s Nü Metal genre.

After Angel Dust, Faith No More would go on to record 1995’s King for a Day . . .  Fool for a Lifetime and 1997’s Album of the Year before ultimately calling it quits in April 1998 to focus on solo endeavors. Nearly a decade later, they would regroup to perform a lengthy list of festivals before, some 23 years after the release of the iconic Angel Dust, finally making their triumphant return to the music world with 2015’s epic Sol Invictus.

Faith No More can be called many things and categorized across the board, though they are, ultimately, a band of musical pioneers who saw past the distinct genre lines of the late 1980s and early 1990s to create something larger than life. Here is to twenty-five years of Angel Dust, a sonic drug that never tasted quite so delicious! 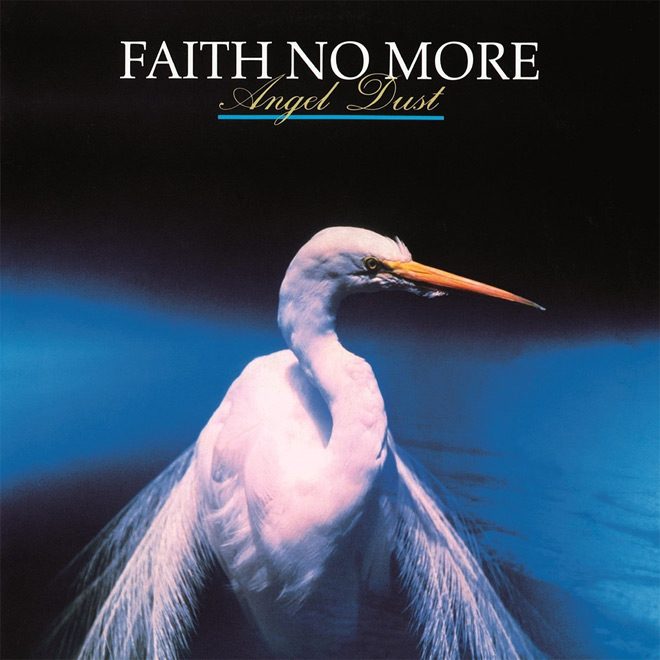