Fall Out Boy – Infinity on High A Decade Later 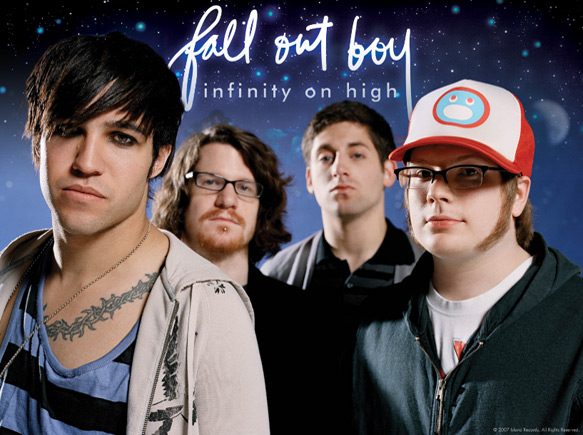 For many, Fall Out Boy is the band they love to hate, or, conversely, hate to love. Their music contains addictive choruses, catchy hooks, and sarcastic, biting lyrics all packaged up in pretty, Pop Punk packaging. Many have a teenage sister that thinks they are dreamy, and others hate that they love them, as well as all those screaming kids. In fact, it was ten years ago that Fall Out Boy released their third studio album, Infinity on High, and the madness seemed never-ending.

Formed in the upper-crust Chicago suburb of Wilmette, Illinois in 2001, Fall Out Boy was originally nothing more than a Pop-Punk escapism for Bassist Pete Wentz and good friend, Guitarist Joe Trohman. With the addition of Vocalist Patrick Stump and, after a succession of drummers, Andy Hurley, the lineup for Fall Out Boy was cemented.

Their 2003 debut album, the acerbic Take This to Your Grave, was a massive underground success, gaining the band a dedicated fanbase. Their moderate commercial success – especially with the single “Grand Theft Autumn / Where Is Your Boy”- was bolstered by their heavy touring schedule and willingness to shake hands with every single face they encountered.

Their second album, 2005’s From Under the Cork Tree, was a major label breakthrough and produced the hit singles “Sugar, We’re Goin’ Down,” “Dance, Dance,” and “A Little Less Sixteen Candles, A Little More ‘Touch Me’.” The album went double-platinum in the United States, and – due to a high profile relationship with Singer Ashlee Simpson – Bassist Wentz became a celebrity and tabloid fixture overnight. What followed for the band was nothing less than sheer chaos.

The aforementioned Infinity on High, the band’s third studio album, hit record stores on Tuesday, February 6 of 2007. Headed for great things, the album debuted at No. 1 on the Billboard 200 in its first week, going on to produce hit singles “This Ain’t a Scene, It’s an Arms Race” and “Thnks fr th Mmrs.” With music composed largely by Stump and lyrics handled by Wentz, the album was more of what Fall Out Boys’ fans loved and haters loved to hate. The hate did not impact album sales, however: in 2007, Fall Out Boy placed at No. 9 in the Top Selling Digital Artists chart according to Nielsen SoundScan.

In addition, the CD peaked at No. 1 in New Zealand; No. 2 in Canada and Scotland; was in the Top Five in Australia and the UK; and made the Top Ten in Ireland. Ultimately, the album was certified Platinum in Canada, Ireland, New Zealand, the United Kingdom, and the United States, as well as two times Platinum in Australia. The commercial success of Infinity on High brought with it accolades and awards for the group.

Reportedly, the album’s title was taken from a letter written by Vincent van Gogh to his brother Theo in 1888, in which he describes his renewed health and the positive effect it has had on his painting. Wentz – a man with a true gift for the written word – had clearly used the great post-impressionist painter’s words to echo his own situation at the time of the release. Whatever the case of the title, the album was stellar and included a plethora of guest musicians and co-writers, including the legendary Rap icon Jay-Z; Ryan Ross of Panic! at the Disco; Chad Gilbert of New Found Glory; producer, vocalist and guitarist Butch Walker; award-winning Producer Babyface played mandolin, organ, and co-wrote several tracks; etc. It serves as a meeting of the creative minds.

The first single/video for the album, “This Ain’t A Scene, It’s An Arms Race,” debuted in January 2007. The song tackled the dilemma of being a key part of a scene that was so over-engorged with blood it was about to burst like a swollen tick. The video took this idea to heart, but with the characteristic Fall Out Boy sprinkling of humor: the band poked endless fun at themselves and their cronies. Scenes ranged from mocking Wentz’s recent online overexposure via selfies; Hurley stuffing the crotch of his pants for a visit to the Playboy Mansion; and a guitar solo filmed to mirror Avenged Sevenfold’s “Seize The Day” video. A moment where the scrawny Wentz is jumping on hotel beds and, thanks to a hefty-sized bodyguard, is propelled out a window to his death was comedy gold.

What no one could predict at that time would be the success of the second single/video, “Thnks Fr th Mmrs,” which can still be heard frequently on radio and television even after a decade. (The title was disemvoweled as a snark to the band’s record label, who reportedly asked Wentz to shorten his overly verbose song titles.) A biting track that is an ode to a former lover, the video went so far left-field that it was somehow ridiculously perfect. Mocking themselves yet again, Fall Out Boy depicted a scenario in which their performance video was being directed by a motley crew of monkeys and apes. A cameo from the pre-Yeezy Kim Kardashian did not hurt the video’s appeal with teenagers or apes, apparently.

As with many albums, some of the best tracks never made it to see a radio or video release. Released digitally to promote the upcoming album, “The Carpal Tunnel of Love” had an evocative title and contained Wentz’ hardcore screams. The titles on the album were characteristically magniloquent, expressive, and immediately intriguing: from “I’m Like a Lawyer with the Way I’m Always Trying to Get You Off (Me & You)” to “I’ve Got All This Ringing in My Ears and None on My Fingers” and the amusing “Don’t You Know Who I Think I Am?” It was a collection of some of Wentz and Co.’s finest works to date.

Fall Out Boy went on to release their fourth disc, Folie à Deux, in December 2008 and a greatest hits collection, Believers Never Die, in 2009. In 2010, the band would begin a three-year hiatus in which Stump worked on a solo career; Hurley and Trohman formed a Heavy Metal supergroup with members of Anthrax, Volbeat, and Every Time I Die, called The Damned Things; and Wentz was Wentz, working on a myriad of projects, musical and otherwise. By 2013, the band was regrouped, reinvigorated, and ready to Save Rock and Roll. Two years later, they released American Beauty/American Psycho, which featured the hit singles “Centuries,” “Irresistible,” “American Beauty/American Psycho,” and “Uma Thurman.” The album peaked at No. 1, making it the band’s third No. 1 album and the group’s fifth consecutive Top 10 album.

Fortunately for fans, Fall Out Boy continue to produce quality, intelligent lyrics and infectious melodies that are never easy to forget. Stump has one of the best voices in Rock-n-Roll music today, and Wentz is certain to go down as one of the best songwriters of our generation. The hooks are undeniable and the product is sweet, even when it is deadly. Congratulations to Fall Out Boy on a decade of Infinity on High. 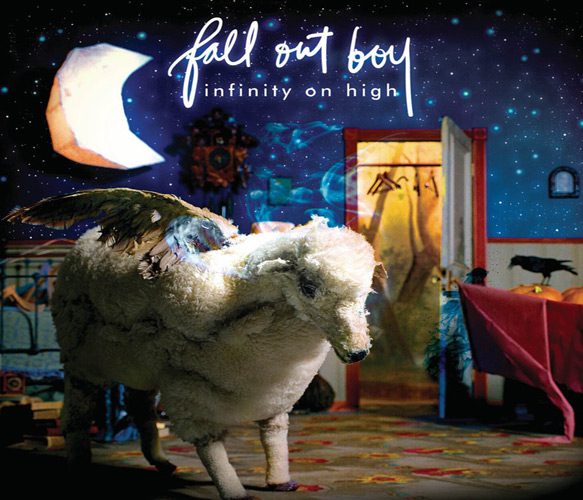