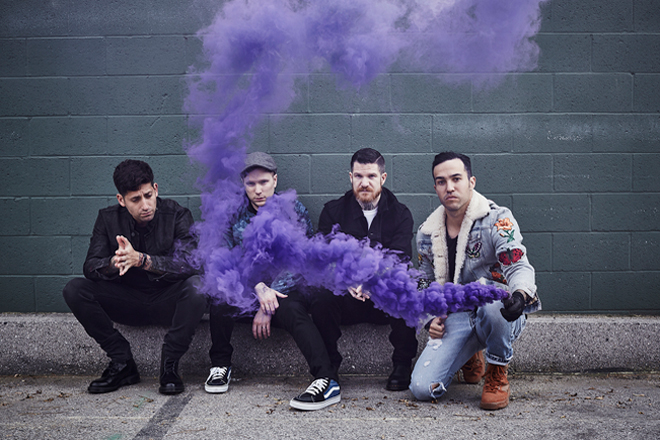 You love them, you hate them, you revel in your loathing worship for Fall Out Boy. Back to piss all over your preconceived notions, the boys are ready to explode with M A N I A, which arrives Friday, January 19, 2018, thanks to Island Records.

Approximately two eons ago, in 2001, Fall Out Boy – named for a somewhat obscure Simpsons’ character and oft abbreviated FOB – formed in the Chicago suburbs as a Pop-Punk side project for Hardcore kid Pete Wentz. Wasting no time in garnering themselves a rabid fan-base, the boys would release their influential 2003 debut, Take This to Your Grave. Pop-Punk mayhem ensued and the band would go on to release five additional full-length studio albums over the next ten years, ranging from 2005’s From Under the Cork Tree to 2015’s American Beauty/American Psycho. Their hit singles are endless and you know them all, word for word! Admit it!

As is often the case, time has seen the evolution of Fall Out Boy from bitingly sarcastic Pop-Punkers to matured but still witty Pop Rock icons, Alternative Press angels to polarizing kings. They are loved and hated, loathed and worshiped for everything they touch, with Bassist and band figurehead Pete Wentz oft at the center of it all. Think what you will, but these suburban boys have been nominated for a Grammy, toured the world a hundred times over, and risen above the resistance for the past nearly two decades now.

Always ready to jump in head-first, Fall Out Boy – Vocalist/Guitarist Patrick Stump, Guitarist Joe Trohman, Bassist Wentz, and Drummer Andy Hurley – are now ready to pump up the dopamine levels of 2018 with their seventh full-length studio offering, the ten-song, genre-busting M A N I A. The album was, in fact, initially slated for release this past summer, but the band ultimately made the executive decision to press the red button and halt release until, well, now. Thankfully, they are finally  prepared to play rocketman with our eardrums and FOB have come for you, cruel January, with a fit of M A N I A.

M A N I A explodes with the Tonya Harding-worthy slap to the knees, “Stay Frosty Royal Milk Tea” (WHY?). For whatever reason, this title evokes thoughts of Nirvana’s “Pennyroyal Tea” but stay frosty, kids, there’s no comparison between the two songs musically. “Stay Frosty” sees Wentz beating the shit out of his bass to create a pummeling explosion while Stump does a superb job of sounding like a pissed off French Resistance fighter. An instant stand-out, “The Last of the Real Ones” (let us not even get into that llama-cide video) is a massive-sounding embrace of finding that last of a dying breed to be the peanut butter to your jelly. This is the Fall Out Boy version of a love song and dammit, it’s delicious ear-candy!

With its Dia de los Muertos-themed video, “Hold Me Tight or Don’t” damns the teddy bears of the world, along with their polyester-filling, through dissection by those that are the deepest shade of jaded. Its followed by the album’s newest video/single, “Wilson (Expensive Mistakes),” a dose of the band’s infamous self-mockery and sarcasm. Neither of these tracks are the strongest on the collection, but that’s okay: they lead us to the stained glass doors of “Church,” a massive, “Centuries”-esque sound that is, in fact, a love anthem. The joyous irony here is embedded in the playful spank of the lyrics: “If you were church, I’d get on my knees.” Spicy, boys!

Gritty Soul Pop “Heaven’s Gate” serves to display what all fans already know: Stump has a set of truly stellar pipes while, topically, this is a tribute to the one that makes you want to drink the Kool-Aid. It flows into the massive sound of “Champion,” another of the album’s myriad of eclectic singles. The Hip Hop-tinged embrace of summer waves, “Sunshine Riptide,” features Burna Boy and, at times, embraces an almost Reggae-like vibe, while moody and massive “Young and Menace” all at once name checks Nikki Sixx and references Britney Spears. This is the kind of bizarre lyrical juxtaposition that is the bedrock of Fall Out Boy!

Dark, sludgy daydream “Bishops Knife Trick” (a reference to the film Aliens) ends the collection with tremendous atmospherics that explore the push-and-pull inherent in relationships and life. Say what you will about Fall Out Boy, but they continually produce material with lyrics that transcend the banal trash that has become commonplace in today’s music. At all times intelligent, sarcastic, poetic, witty, and hyper-aware, this is a band that create music that is, indeed, poetry, even if it sounds like a dirty, trashy rocking good time bopping uglies with the best of Pop.

You are not alone if you still remember the days when Fall Out Boy played in dingy clubs and Wentz would literally swing from the rafters. Sure, those days were fun but every band has to evolve and, on M A N I A, Fall Out Boy have blended all the very best of what they do to champion a new sound that defies categorization. Bigger and bolder, still rocking but with an infectious nod toward more vanilla tastes than their Hardcore roots, these are some truly talented gentlemen who continue to resist and rise above. Three cheers for the sweet revenge of success! CrypticRock give Fall Out Boy’s M A N I A  5 of 5 stars. 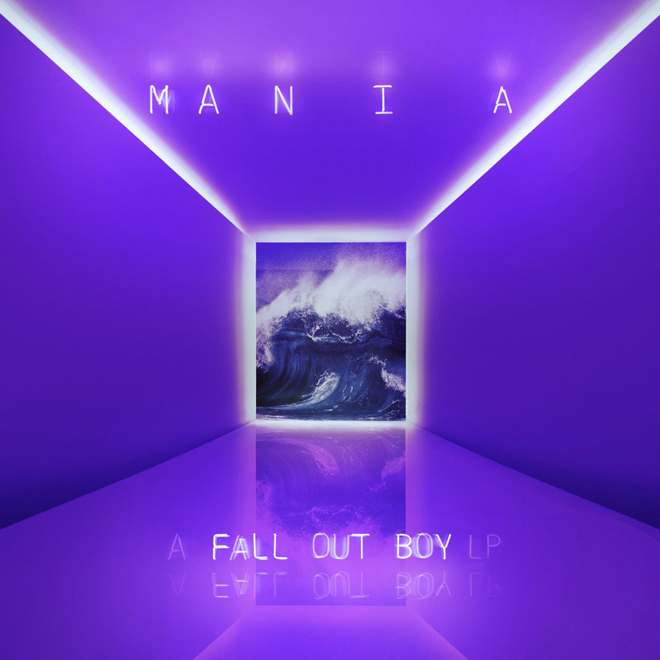