Every lush, beautifully forbidding wilderness holds its own secrets and there is definitely something rabid lurking in Feral, a brand-new Horror offering from IFC Midnight that arrives to select theaters and On Demand as of Friday, May 25, 2018. 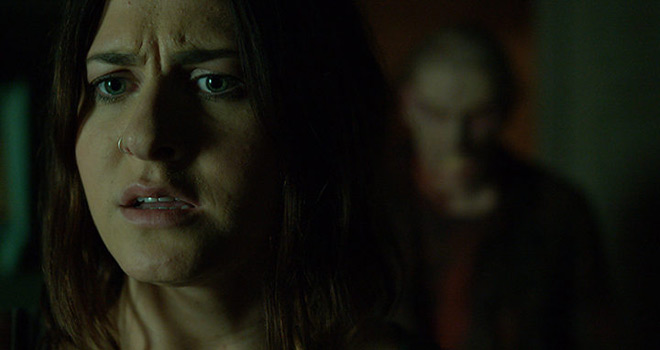 As the sextet sit by the campfire, teasing one another about their futures and respective fields of study, they immediately overhear a bizarre animal cry deep within the dark woods. Taking this and some testy tempers as a sign to call it a night, the three couples retire to their tents. Here, we quickly learn that all is not hunky-dory with the crew: concerns seem to swarm around Alice, who was not always gay and once had a fling with Jesse. Needless to say, Alice and Jesse’s current beaus are none-too-thrilled to have the pair reunited, so to speak.

However, this dramatic tension quickly becomes old news when one of the gang goes out for a late night leak and never returns. Soon after, a second friend is attacked by something in the woods and slips into a coma-like state. Taking on the role of doctor and head-honcho, Alice quickly steps up to the plate to care for their injured friend until the morning light when the group can attempt to figure out what step to take next. 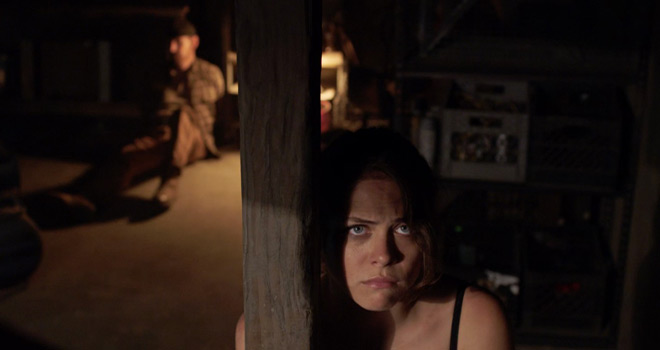 Fortunately, the sunrise brings with it a hiker, Bill Talbot (Lew Temple: The Devil’s Rejects 2005, Unstoppable 2010), who owns a cabin nearby stocked with food, water, and medical supplies. Unfortunately and predictably, there is no ranger’s station in the area, nor any cellphone service. Racing against time to help their friend, the remaining four friends will be forced to make some dire decisions, all while facing the fact that there is definitely something very dangerous inhabiting the woods.

Clocking in at 90 minutes in-length, Feral was directed by Mark H. Young (Southern Gothic 2007, Concrete Burn 2017) and written by Young with Adam Frazier. Almost immediately, Feral draws some general comparisons to 2010 Australian Horror flick Primal, while blending in the ‘cabin in the woods’ mystique along with elements of Eli Roth’s Cabin Fever (2002). What that all equals is a film that utilizes several overdone Horror tropes (cabin in the woods, viruses, and rabid humanoids) and yet somehow comes out never feeling cheesy or derivative, but instead creates a mostly enjoyable ride.

As far as originality, Feral does have an immediate twist, in that, the bulk of its main characters are doctors-in-training, which leaves the viewer to believe that they are potentially something more than mere cannon fodder, or, as it were, fresh meat. For some, this is true, particularly in the case of Alice (Taylor-Compton), an intelligent and courageous young woman who will fight with all of her might for her friends, girlfriend, and her own survival; putting the Hippocratic oath to the ultimate test. In the role, Taylor-Compton does the entire production proud: holding much of the weight on her shoulders as she battles against genetic impossibilities while trying to maintain her integrity throughout. Temple, as Talbot, is also well-cast in his role, equal parts suspicious mountain man and tormented father. 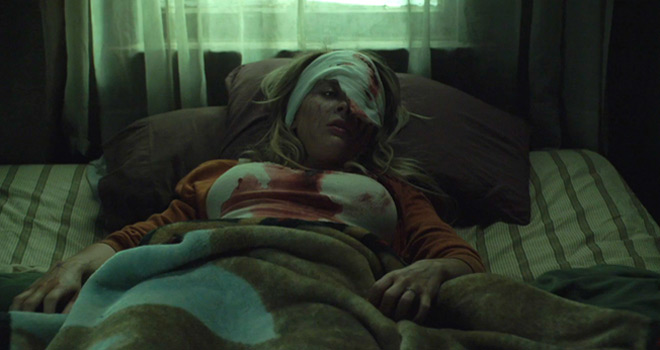 Perhaps most importantly to the success of Feral is the fact that the creatures here, or “ferals,” are done well, with the special-effects makeup team headed by Jerry Constantine (The Chronicles of Riddick 2004, Watchmen 2009) flexing their skills in creating humanoids that are hideous enough to be disturbing, if not entirely scary. Think 2007’s I Am Legend – zombie meets vampire, hairless cretons with a thirst for flesh. Their snarling fangs and animalistic movements might not be truly horrifying, but they are certainly unsettling enough to make viewers not want to tango with these creatures in the woods at midnight!

While there are some moments where Feral lags, overall, it is an enjoyable ride that never feels cheese-tastic or ridiculous, much in thanks to its talented cast and crew. The score here is well-done, the acting is solid if not impressive, and the care and detail that went into drafting the creature portion of the feature is obvious.

Admittedly, there is a lot of thrashing and flailing around, and, sadly, there is never anything truly scary, horrifying, or even that sense of immediacy to keep you on the edge of your seat. In fact, there is blood and some gore, but by today’s standards nothing is ever too shocking or grotesque.

Ultimately, this all allows Feral to fall into fairly tasteful (pun intended) territory. However, despite any of this, Feral is still a film that you can fully enjoy, even if you might not watch it again and again. Breaking out the popcorn but perfectly okay with turning out the lights, CrypticRock give Feral 3.5 of 5 stars. 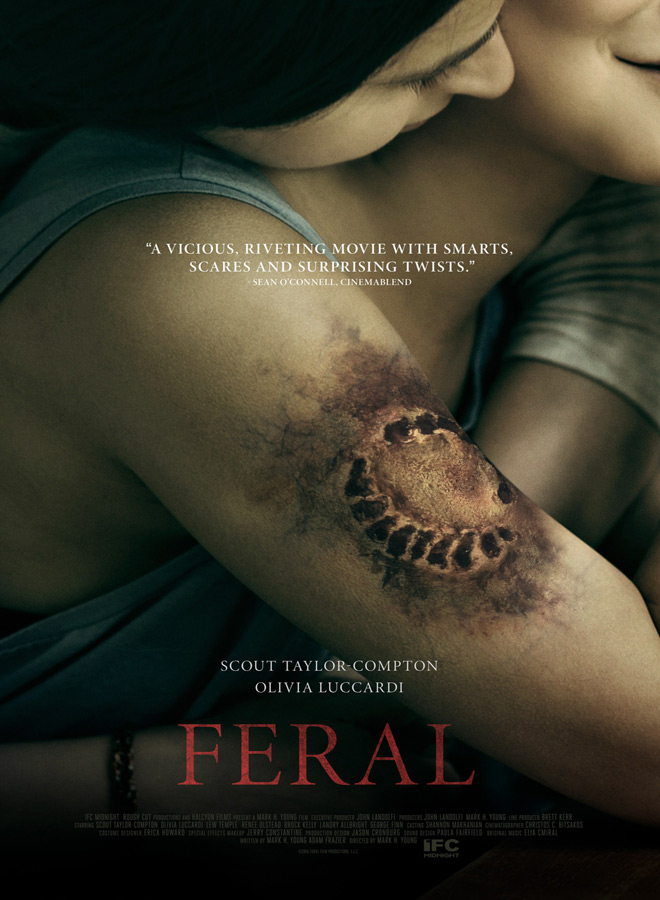