The movie Fire City: End of Days opens with the William Shakespeare quote, “Hell is empty and all the devils are here,” introducing the idea that devils and demons walk the earth, feeding from the miseries of the human race. These beings appear as normal humans unless they chose to reveal their true nature. The feel of the flick is reminiscent of a graphic novel, depicting a gritty city’s underbelly. 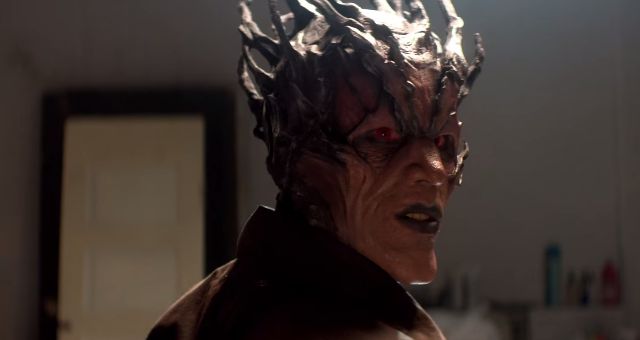 The action opens with Procuring Demon Atum Vine (Tobias Jelinek: The Possession of Michael King 2014, Southland TV series) patrolling the halls of his apartment tenement. Dressed in a leather duster, Atum brings to mind a hard-boiled film noir detective. He stops an enraged human man, Andre (Derrick L. McMillon: Straight Outta Compton 2015, NCIS: Los Angeles TV series), from harming a young girl named Sara (Keely Alona: The Beacon 2014, Up North TV series) in the basement. Atum desires maintenance of the status quo, and “No more dead little girls in the basement.” The girl retrieves her doll, holds onto the nail she meant to use to protect herself, and runs off. 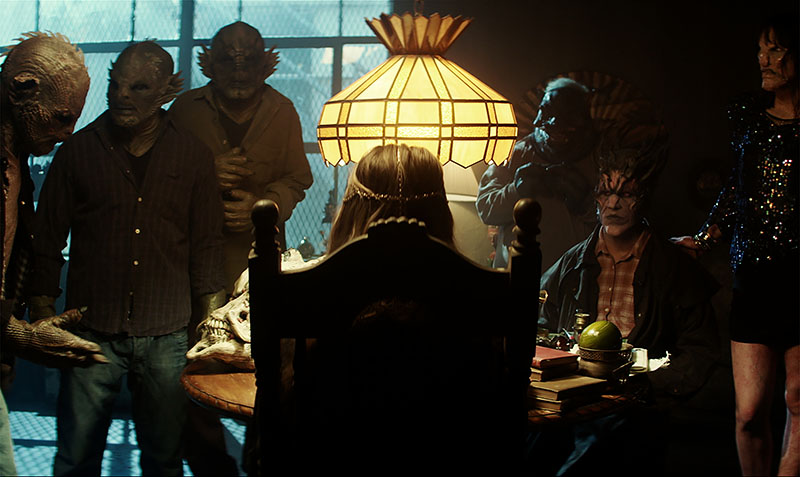 In the building, a fortune teller (Danielle Chuchran: Survivor 2014, Haunt 2014) experiences an anomaly in a card reading which costs her client Maria her life. The fortune teller’s other face is a demonic interpreter called Cornelia. She interprets signs for the demonic community, and even after a ceremony involving a mask, worries over the portents.

Atum provides “weed” for the demonic tenants by scouting emotional turmoil. He directs the demons to domestic abuse between Frank (Harry Shum, Jr.: Glee TV series, Shadowhunters TV series) and Lisa (Jen Oda: Unnecessary Force TV series, Mac & Devin Go To High School 2012) in apartment 32 or a tense stand-off between young Sara, her attacker Andre, and her drugged-out mother Jane (Kristin Minter: Friends With Money 2006, Blur 2011) in apartment 33. Things grow tense, though, when the human inhabitants of the building mysteriously find inner peace. Without their daily dramas, the demons begin to starve. To help restore the status quo, Amber, a lust demon, (Kimberly Leemans: Law and Order TV series) performs an uncomfortable full-nudity dance in apartment 32, hoping to drum up some sinful emotion. However, the tenants Frank and Lisa look on, unaffected. Human tenants forgive past transgressions and are freed from addictions. With these changes, the humans present unnatural, plastic smiles reflecting their renewed sense of the goodness within the world. 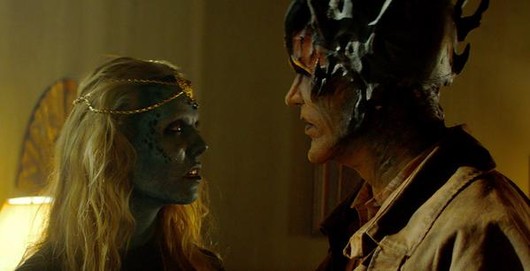 The demons seek an explanation of the alteration in the humans. Cornelia, the Interpreter, blames an unknown disease. She sends Atum to face the dangers of the streets to retrieve some misery to feed the demons’ ravenous hunger. He worries, “You never know whose territory you’re in when you’re in the wild.” Once outside their building, an assailant knocks Atum unconscious and takes him to a demon club. The club owner heard of the situation in Atum’s apartment building. “People without shame, fear, or misery?” Since such people provide no sustenance for the escaped denizens of Hell, the club owner wants to understand. Atum has no answers to offer, though, and a riot breaks out in the club. The owner yells at Atum, “You! You need to leave. She sent you. Everything was fine until you showed up.”

Trying to clear his head before returning to the apartment building, Atum visits a diner. He asks the human diner owner how he is doing. “Same as yesterday. Except, well, I don’t feel like killing everything.” Vine asks, “When did that come over you?” The owner replied, “A little bit ago, when you came in.”

The demons accuse, “Disease came to us, not the humans.” Atum realizes somehow, inadvertently, he is producing the change in the humans. “I’m one of the pieces, and I don’t like it.” Unable to find a shred of human misery on which to feed, the trio demons turn against one another. Someone kills the slug demon. The demonic desperation grows. One wise demon points out the Interpreter will survive, since Fortune chooses the Interpreter, and the only way one chosen by Fortune can die is through suicide.

Atum investigates an attack and discovers blood which belongs to neither a human nor a demon. A red feather provides another clue. He gathers magic ingredients to summon the being, without success. Continuing his quest for answers, he visits Sara and her family who explain their alteration as “time we became truly human.” The sweet interactions between the demon investigator and little girl lends a touch of emotion to an increasingly wooden plot. Upon leaving her company, Atum realizes, “There’s no cure, because there is no disease.”

He explores the basement where he first met Sara and finds a twist in the plot. An ascended being discusses the situation with Atum. (The dual voice used by this being is difficult to follow.) She explains humans as “flawed, but perfectly flawed.” She knows Atum’s real name – the Future. That evening, Atum dreams of interacting with Sara. In his dream, he reveals his true, demonic form by piercing her palm. Since demons do not dream, this experience shakes Atum. 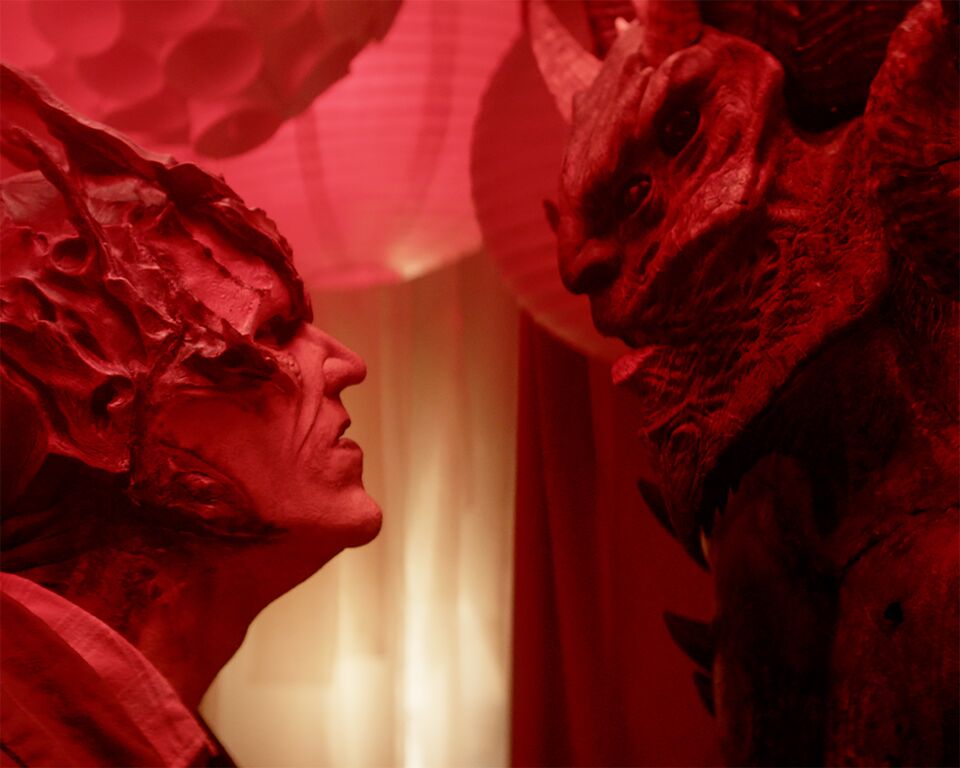 The Interpreter visits, saying, “You’ve done what no other demon’s done. You care for them (humans). Your compassion is a hole in your heart.” She suggests the cure which should restore the status quo. “Kill the girl.” The other demons follow the Interpreter’s lead and put pressure on Atum to kill Sara. Vine’s philosophy changes. “We see everything. We live forever. We are freaks.” He considers Sara. “She is perfect. Beautiful. The world belongs to her.” A showdown commences, ending with a ‘surprising discovery.’ The cinematic closing scene leaves the plot open for a sequel. Fortune found its new interpreter. “There are signs everywhere. A floating leaf. A sound. A shadow. It is not the meaning, but the signs that matter and concern us.”

Fire City: End of Days explores the ideas of ascending to a more evolved nature and the importance of forgiveness. Atum drives the plot, guiding the viewer through the sometimes slow story line. Although he strives for a sort of detachment at first, his character provides the most realistic interactions. The film’s low budget hampered the polish of big studio productions, of course, and the acting and makeup effects leave a bit to be desired, but the story is interesting. CrypticRock gives Fire City: End of Days 2.5 out of 5 stars. 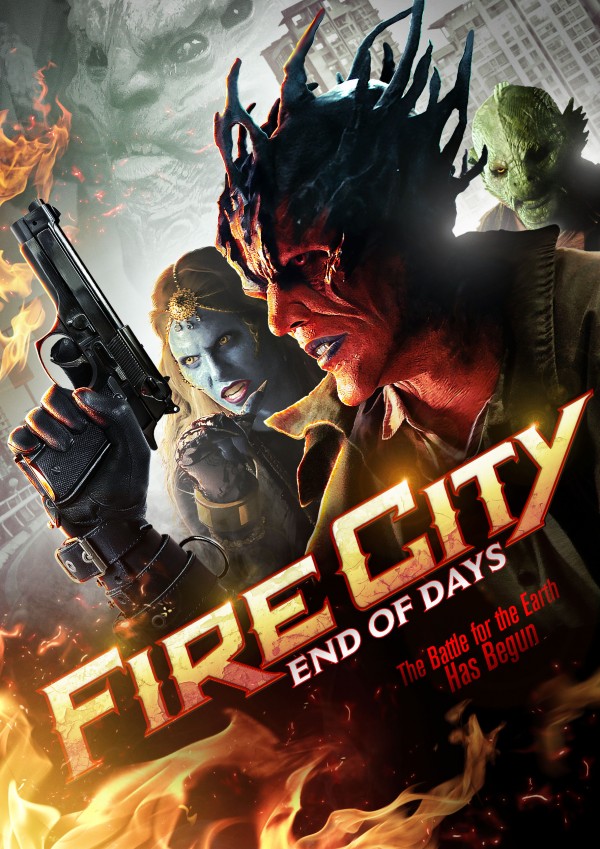 Purchase Fire City: End of Days on DVD on Amazon