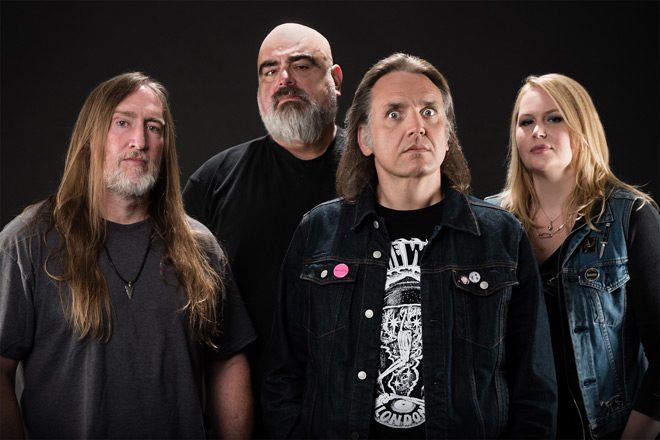 In the modern day of ever shifting trends, the Doom and Stoner Rock genres have re-popularized. Laying roots in a much earlier place and time where bands like The Obsessed, and Kyuss were at the forefront, somewhere in the midst of all, just before the turn of the century, bi-coastal Hard Rock band Fireball Ministry came into fruition.  After some time away, the band return to carry on in 2017 with their freshest release Remember The Story on October 6th via Cleopatra Records.

Their fifth studio album, and first in seven years, Remember The Story is a somber, sweet tale from the dark days into the colorful ones that breathe emotions of hope and strength. The tight knit tribe responsible for the new album is lead by founding members James A. Rota II on lead vocals/guitar, and Emily J. Burton on guitar/backing vocals. The newest addition, Scott Reeder, who spent time in both Kyuss and The Obsessed, is on bass, and long time member John Oreshnick remains behind the drum kit.

There are ten new songs in total, and while the recording and mix is clean and clear, there are moments where the balance is odd, leveled up in the backing vocals, but overall the the mix is a success. Additionally, one of the best aspects of Fireball Ministry is in the unique vocal harmonies between the male and subtle yet very significant female vocals. That in mind, there is definitely a long term stand out working relationship dynamic between Rota II and Burton that gives the signature sound it’s very own flavor that breathes positive vibes into the listener’s ear.

Starting off the album with some fun, as well as a bold title, is “End Of Our Truth.” A track which exemplifies the duel harmony vocals along with the simplistic stoner rhythms, it stays true to the genre before later speeding into a more complex and hearty sound. Jumping into “Back On Earth” and “The Answer,” that Hard Rock vibe takes over and the clean beats drive the party home on both accounts with catchy jams matched with an old school Rock ethic.

Moving on, the emotions rise with the tune “Dying to Win” as the energy rises to the task with some sweetened riffs and stoner beats. Following this is “Stop Talking” which is an instrumental jam where the band uses their tight musicianship to tell the story in a dynamic way. With each song averaging over four minute in the length, a sure fire favorite is actually the shortest track, “Weavers Dawn” with its serene and happy stoner frolic that ends on an abrupt yet exciting note.

As for the title track, it is a slow, ritualistic old school stoner type jam. While on one hand is well-crafted and as pure as ever, it does not hold up to the modern swing of this genre in uniqueness. On the other hand, it would not really serve its purpose as a signature Fireball Ministry tune if it did.  Immediately after “All For Naught” is exactly everything a Fireball Ministry song should be.

For the grand finale, Fireball Ministry leave the listener with a creatively peaceful acoustic style ballad-like cut called “I Don’t Believe a Word.” Complete with clean, sweet lyrics and vocals that build up in intensity, almost in vein of Pink Floyd, when Emily’s vocals come in, it turns more serene as emotion fire up, painting a colorful blanket over anyone in its path. A very strong ending to a well rounded album, it is a song that demands a repeat play or four.

There is a unison and perfection in the harmonizing, and it holds its strength in the players on each song heard on Remember The Story. If James A. Rota II and/or Emily  J. Burton were not members of this band it would definitely lack on all fronts, not that the other members are not important, but simply because of the musical bond they have shared together for so many years. All this said, good times seem to be on the horizon for Fireball Ministry, and as always, there is no better time than the present since no one knows what the future holds. For all the obvious hard work and talent involved, CrypticRock gives Fireball Ministry’s Remember The Story 4 out of 5 stars. 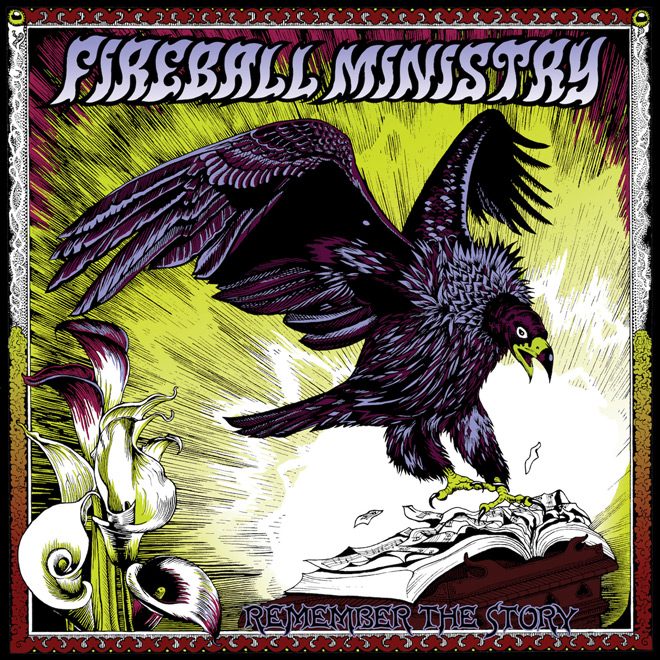