Arguably one of the strongest years ever in Hollywood filmmaking was 1982. Science fiction hits like E.T. The Extra-Terrestrial and Star Trek II: The Wrath of Khan stood with then-underrated films like The Thing and Blade Runner. Cult Horror favorites like Basket Case and Creepshow were released, while Jason Voorhees donned the hockey mask for the first time in Friday the 13th Part III and Poltergeist gave people a reason to fear TV static. It also brought about the first big action films for two stars who would dominate the rest of the decade with high-explosive, testosterone-fuelled blockbusters; Arnold Schwarzenegger’s Conan The Barbarian , and Sylvester Stallone’s First Blood, which hit theaters across America back on October 22nd in 1982. 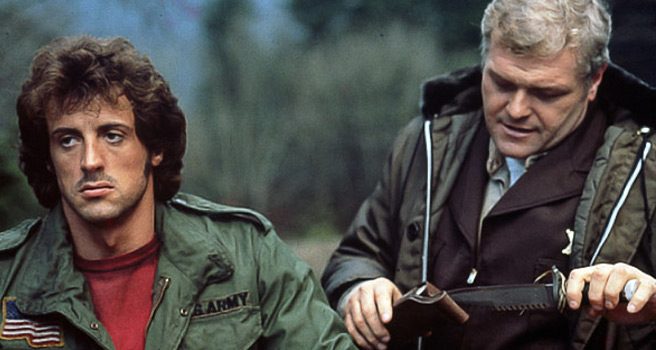 The two films contrast each other in a way. Conan, which had been a big property for most of the 20th Century, became the stepping stone for Schwarzenegger to reach new heights. Directed by Ted Kotcheff, who later went on to do the 1989 Comedy Weekend at Bernie’s, First Blood was a risky venture for its producers and star. It had gone through a difficult decade of development until Stallone – already famous for the Rocky films – signed onto the project. Even then, he had his doubts, mentioning on the DVD commentary that the original cut was so bad he wanted to bury it to avoid killing off his career. Instead, it paid off big, making back its estimated $14 million budget nearly 10 times over in worldwide sales, making Rambo a household name fit for sequels, video games, cartoons, and parodies.

When people think of Rambo, they are likely to imagine the bandana-wearing, musclebound soldier firing wildly towards hordes of goons while yelling his head off. If they were not seeing Rambo himself do this in 1985’s Rambo: First Blood Part 2 or 1988’s Rambo 3, they were seeing Charlie Sheen do it in 1993’s Hot Shots Part Deux or Weird Al Yankovic do it in 1989’s UHF amongst many others. Even when he returned in the grittier Rambo in 2008, the violence was amped up even more. A Rambo film without a body count was like Indiana Jones without his hat and whip. So, it seems odd to look back at the first film and learn that not only does Rambo avoid killing – causing only a single fatality by accident – but that it was tamer than the novel it was based on.

Written by David Morrell and published in 1972, it has the same gist as its movie counterpart; Rambo, a Vietnam veteran turned drifter, is arrested by Police Chief Wilfred Teasle for resisting arrest. He is sent to jail, but it triggers flashbacks to his time in a POW camp during the war, so he flees into the countryside and fights back against anyone getting in his way. Only in the novel, instead of just taking them down, he straight-up killed them, whether they were police, National Guard, civilians, or search dogs. He does not take any pleasure in it – he just feels driven to do so because he feels his pride is insulted. The battle between Rambo and Teasle becomes an analogue for the Vietnam war itself as Teasle is better equipped, larger forces are outmanoeuvred by Rambo’s guerrilla tactics. Yet, neither man is treated as a straightforward hero or villain – just two men who ended up causing each other’s downfall because they could not let go of their pride. It sounds like it could make a good movie, but it was easier said than done. 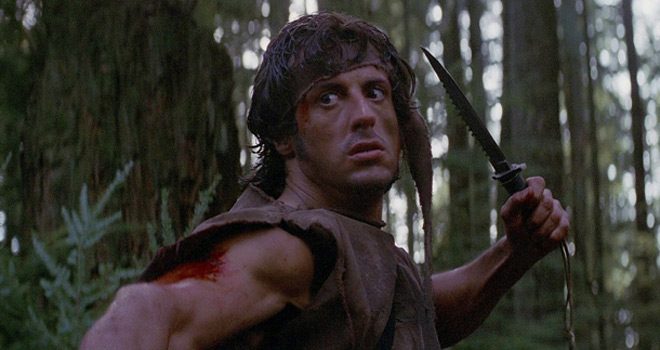 First Blood’s rights to the book went through 6 producers and 6 directors across both Columbia Pictures and Warner Bros’ attempts to get it on screen, until Andrew Vajna (Total Recall 1990, Tombstone 1993) and Mario Kassar (The Doors 1991, Basic Instinct 1992) bought them for their company Carolco Pictures for approximately $385,000, and its script for a further $150,000 (combined together and adjusted for inflation, this would be worth about $1,370,000 today). The script, written by William Sackheim (The In-Laws 1979, The Hard Way 1991) and Hill Street Blues series Co-Creator Michael Kozoll, had already shaved the body count to 16, but Stallone himself toned it down further to make Rambo a more sympathetic character, and alter the plot from a story about pride to one about how society treated its Vietnam veterans.

It is not particularly subtle about it either. Rambo goes to a small town in search of an old war buddy. He wants to stay longer, but Sheriff Teasle (Brian Dennehy: Cocoon 1985, Ratatouille 2007) – now more of a plain villain – tries to force him out, saying ‘his kind’ are not welcome in his town. He actually thinks Rambo is a vagrant, but the implication is that Vietnam vets have no place in society and should be moved on at best. Others like Deputy Galt (Jack Starrett: Blazing Saddles 1974, Grizzly II: The Concert 1983), a nondescript cop in the book, becomes a sadist who takes pleasure in tormenting Rambo, mocking him as he unwittingly triggers Rambo’s rampage. Even as his former superior, Colonel Trautman (Richard Crenna: The Real McCoys series, Death Ship 1980), tries to get him to stand down before he kills “friendly civilians,” Rambo responds plainly, “there are no friendly civilians.”

First Blood’s mission statement is delivered at its clearest when Rambo bellows to Trautman about how he was sent off to fight for his country, seeing his friends die, and all he got for it was “those maggots at the airport, protesting me, spitting.” It is not the most eloquent take on the Vietnam war’s ethics, but Stallone does a good job at putting across Rambo’s frustration with life back home and how people have treated him. For a man famous for portraying bad-ass tough guys with little emotional range beyond quips, Stallone’s strongest moments are when he allows his characters to show some vulnerability. 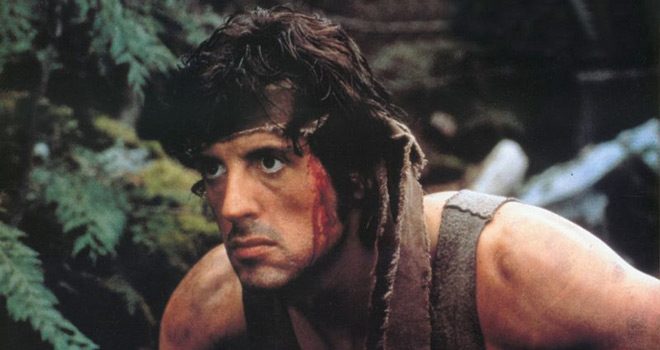 Yet, not everyone was so enamoured with First Blood on release. Roger Ebert praised Stallone for making the film believable (“Although almost all of First Blood is implausible, because it is Stallone on screen, we’ll buy it”), as well as Crenna and Dennehy for their performances. But he disliked the ending, citing Rambo’s speech as clichéd, and wondered “what it would be like to see (an action film) end with a whimper rather than a bang.” Some would say it already does as Variety Magazine’s review said it “does not even try to find a solution to Stallone’s problems.” Rambo is convinced by Trautman to go into custody and is sent off, just as Teasle wanted in the first place.

There was another ending that did offer one solution though. The Sackheim-Kozoll script originally had Rambo kill himself, forcing Trautman to take his life, but Stallone felt it was unfair, telling Kotcheff (from his biography Director’s Cut: My Life in Film, ECW Press, 2017) “We put this character through so much. The police abuse him. He is pursued endlessly. Dogs are sent after him. He jumps off cliffs. He runs through freezing water. He is shot in the arm and he has to sew it up himself. All this, and now we’re gonna kill him?” Others supported the suicide ending, as Kirk Douglas – originally cast as Trautman – quit the film on hearing about the changes. Ultimately, Kotcheff shot both endings back-to-back on Stallone’s insistence, and then let the test audiences decide. 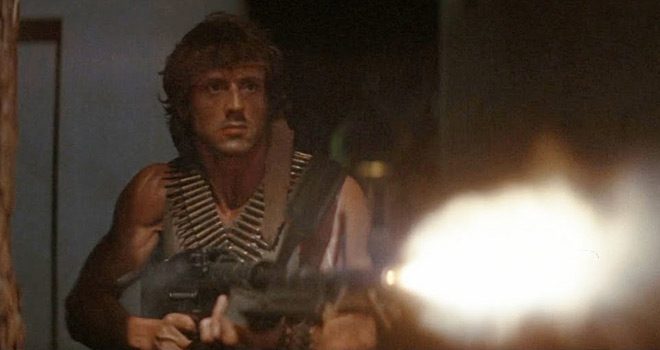 The good ending won out and the suicide ending was left for the Deleted Scenes section on the DVD years later. Whether it would have pleased Variety or Ebert is hard to say, but it did not please test audiences. Going with the one where Rambo survived paid off in the long run, but it does make one wonder what would have happened if the other ending was chosen. Would the film still have been as fondly remembered? Would people have preferred a world where Rambo remained a tragic character than one ripe for parody a decade later? No one can know for sure now, but the original novel may give people a clue.

Morrell killed off Rambo in the end, having him put down by Trautman when he became too weak to do the job himself. There were no second chances or get-out clauses; he was dead and Morrell did not work with him again… until he wrote the tie-book to Rambo: First Blood Part 2. By then, the character had become so closely associated with Stallone that most people were unaware that he came from a novel to begin with. Though, by then, Rambo was that screaming soldier on the big screen, a different beast altogether from his book counterpart. Morrell seemed to have thought so too, citing in the tie-in book the biggest key difference between the two Rambo’s and perhaps why one became more iconic than the other; “In my novel First Blood, Rambo died. In the film, he lives.” That is why First Blood remains a decade defining film 35 years later. 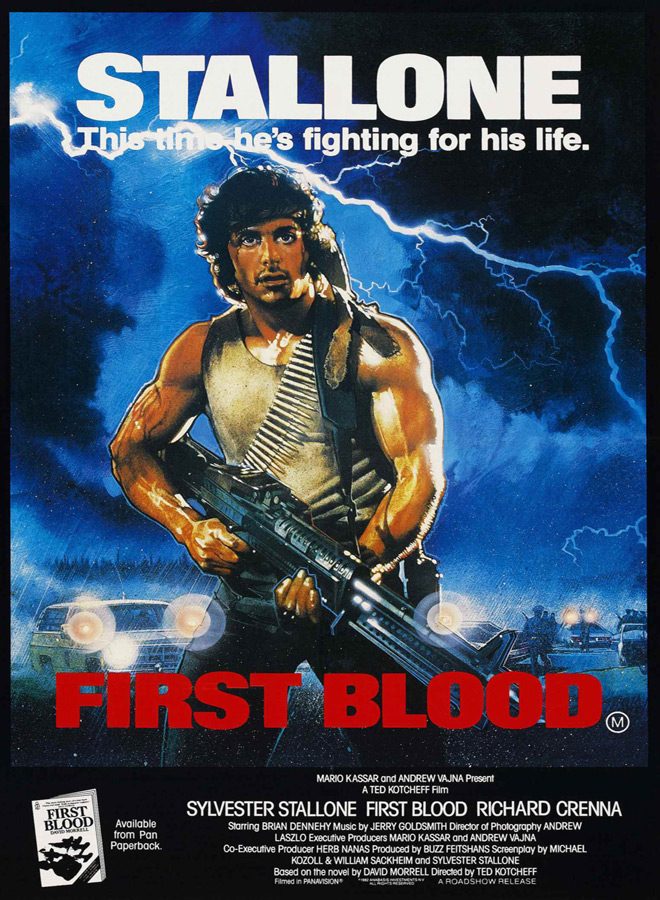