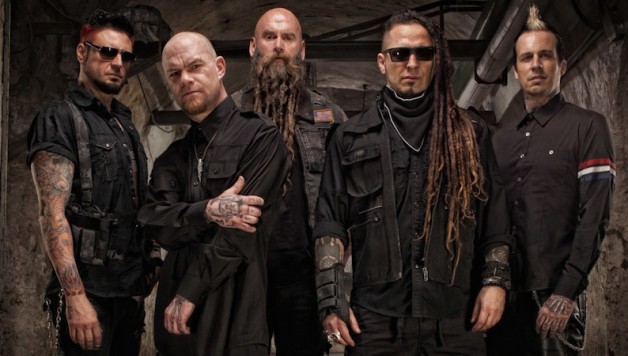 Five Finger Death Punch has exploded on to the Hard Rock/Metal scene over the last decade to become one of the biggest bands in the genre. Made up of veteran musicians of other projects including former U.P.O. guitarist Zoltan Bathory and former Motorgrater vocalist Ivan Moody, they signed with Firm Music, and Summer 2007, the band released the EP, Pre-Emptive Strike, quickly followed by their full-length debut album Way of the Fist that went gold in 2011.  Also, 2007 saw Five Finger Death Punch hit their first tour on Korn’s Family Values and Bitch We Have a Problem tours, with Chimaira and All That Remains early 2008,  and Disturbed on their Indestructible US Tour, helping them gain a mass of exposure.

Two years later, in 2009, they released War is the Answer, which was the first Five Finger Death Punch album produced by Kevin Churko (Ozzy Osbourne, Slash, Rob Zombie) and mixed by Randy Staub. It debuted at 7 of the Billboard 200, went gold, and all of a sudden Five Finger Death Punch were becoming one of the hottest bands as they went into 2011’s American Capitalist. So prolific Five Finger Death Punch has become, in 2013, they released The Wrong Side of Heaven and the Righteous Side of Hell, Volumes 1 and 2, both reaching #2 on Billboard 200, and become headlining mainstays all around the world.  Now, in an astounding feat, a mere two later, Five Finger Death Punch return with their sixth studio album, Got Your Six, with Moody on lead vocals, Bathory on rhythm guitar, Jeremy Spencer on drums, Jason Hook on lead guitar and backing vocals, and Chris Kael on bass, backing vocals.

Got Your Six is an 11-track concept album that pushes Five Finger Death Punch’s boundaries and comfort zone.  The album’s title track, “Got Your Six,” gets things going with a single intro followed by assertive drums with Moody expressing he has got a friend’s back.  Next, “Jeckyll and Hyde” builds from the intro with fist-pumping guitars and drums as the guys sing of the dual personalities everybody possess.  A tight riff brings in “Wash it All Away,” a tad lighter piece with clean drum accompaniment in this tune of looking for a clean slate.  Moving onto “Ain’t My Last Dance,” this track features solid drum solo intro as well as throughout, then, the guitars work in a choppy riff before the melodic hook sings of not giving up. An anthemic riff brings in “My Nemesis” followed by driving drums that push the message of a one-way relationship; “I gave you everything/and in return/you gave me nothing.”

A rousing intro hails in the short, concise “No Sudden Movement” with choppy guitars and drums, then, the growling starts in this piece of someone caught in the crosshairs of the one they wronged. Airy guitars start “Question Everything.”  Then, the fun begins with the drums pushing the tune.  This alternates between airy guitar play and hardcore Metal as Five Finger Death Punch growls, “I can’t give you anymore/I question everything.”  The guitar solo for this track has an acoustic, Latin to it.  Nothing’s free in life and sometimes you have to play others’ games to win in “Hell to Play,” a track of clean unadulterated, fist-pumping Rock; “The hell I had to play/everything comes with a price.”  Five Finger Death Punch slows things down a bit with the power ballad “Diggin’ My Own Grave,” a lush tune showcasing tempered guitars and drums like beating to get out of a tomb.  The solo has a plaintive feel like asking, “Is there peace beyond the rage?”

Returning back to the solid Metal is “Meet My Maker,” turning into a hyper-drummed, air-tight riff laden piece of not going down until the very end. Got Your Six ends as hard as it begins with the explicitly aggressive “Boots and Blood.”  This track has drums to stomp a mud hole in the listeners chest accompanied with guitars that rip up the remains in this declaration of what happens when Five Finger Death Punch is crossed; “I won’t waste words on you/I will rain down on you with/Boots and blood.” 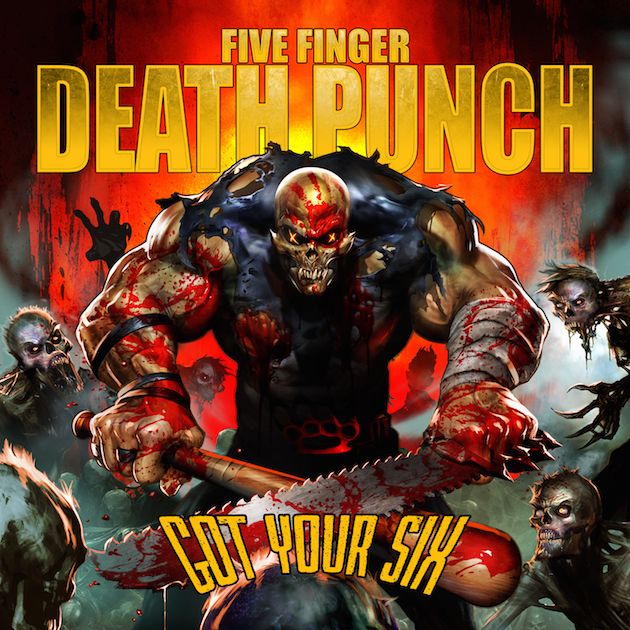