December 11, 2013 Five Finger Death Punch – The Wrong Side of Heaven and the Righteous Side of Hell Volume 2 (Album review) 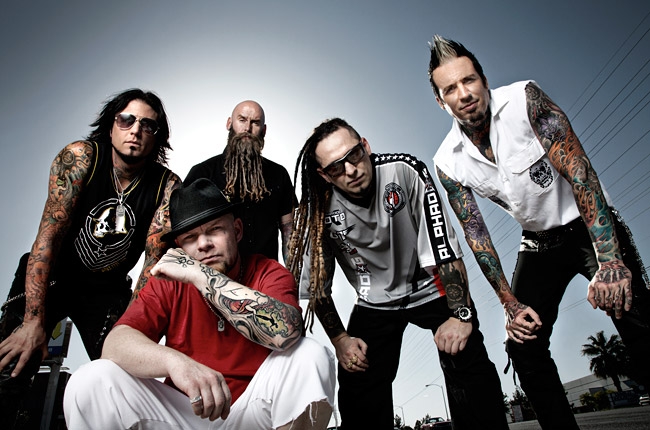 Since the band emerged onto the music scene back in 2005, Five Finger Death Punch has become one of the most popular and biggest metal bands on the scene today. With legions of fans all around the globe better known as “Knuckleheads”, fans immediately took to this band for their passion, love, appreciation and dedication. With four albums to their name they have gathered a bucket full of hits such as “The Bleeding”, “Never Enough”, “Under and Over It”, “Far From Home”, “No One Gets Left Behind”, “Remember Everything” along with countless others. After their recent success of their album The Wrong Side of Heaven and the Righteous Side of Hell Vol 1, that was released on July 30th of this year, the band decided to treat their loyal and incredible fans with a second volume to this installment calling it The Wrong Side of Heaven and the Righteous Side of Hell Vol 2 released on November 19th. Comprised of Ivan Moody (Vocalist), Zoltan Bathory (Guitarist), Jason Hook (Guitarist), Jeremy Spencer (Drummer), and Chris Kael (Bassist) these musicians are not just bandmates to one another, they are brothers united together working towards a common goal to give the best that they possibly can to all of their loyal fans.

The very first track on The Wrong Side of Heaven and the Righteous Side of Hell Vol 2 entitled “Here To Die”, is explosive right off the bat knocking your socks off. This leads as a perfect sequel picking up exactly where the previous album left off. With incorporation of some amazing vocal transitions by Moody this song also captures the essence and energy that would set the bar for the rest of the album. Get ready to be amazed with the next track on the album called “Weight Beneath My Sin”. This track is a very straight forward fast paced metal song using the amazing guitar skills from Hook as well as some smashing drumming skills from Spencer. The track is well executed and will certainly become a fan favorite with its balance of rhythm and mood that goes along well with the lyrics. Next is “Wrecking Ball”, which is very much a continuation of the song “Under and Over It” from their album American Capitalist (2011). Once this track starts you will instantly fall in love with it, as it carries the same fast hard hitting action packed feeling as “Under and Over It” did. It is one of the standout tracks on the album for sure and classic Five Finger Death Punch. The next track is the very first single of the record entitled “Battle Born”. What makes this track different from what the audience listened to thus far on the record is that it goes in a different direction captivating some of the most powerful lyrics imaginable from this band. It is a great song that is very melodic and truly one of those songs that cannot help but be loved while wanting to listen to over and over. With its catchy melodies, outstanding guitar riffs, and guitar solos this track will certainly just make you want to crank up the volume.  “Cradle to the Grave” is up next and it has some outstanding double bass and flawless drumming. It carries on with the melody from the previous track with some killer backing vocals. It makes for a killer track that will certainly work exceptionally well at any of the band’s live performances.

Those who love aggressive songs the track “Matter Of Time”  is just for them.  It is one of the most aggressive songs offered here with it is extremely fast pace. It features some outstanding riffs and Moody’s signature growl and tenacity makes this track a perfect knockout. “The Agony of Regret” is an interlude track  using the incorporation of acoustics and the sound of a western vibe guitar. It will be a total surprise for the fans because it is far different than what the band has ever done. It makes for a great segway and carries on the album perfectly. The next track, “Cold”, is emotionally powerful and hauntingly beautiful. This track will make even the strongest of men a little teary eyed with the spectacular vocal performance from  Moody. Kicking things back into high gear and better known style of Five Finger Death Punch is their track “Let This Go”. This track is a shred-fest of some amazing guitar and drumming work that will get fans kicked into high gear and will have you rocking hard and cranking the volume loud enough that your neighbors will hear it. The solid guitar work and driving beats in this song are flawless. “My Heart Lied” is the next track on the album, and continuing with the ambiance, this one does not disappoint one bit.  A lot of people may say that this is a standard “rocker song” but that is certainly not the case. This track delivers energy and emotion along with some solid guitar work that any fan of rock/metal music will love. With the track “A Day in My Life” you are treated to some of the heaviest guitar riffs yet. It is another impressive track and has some astounding guitar work, perfect bass, and drumming work. The last track on this record is certainly a major highlight; it is a cover song of The Animals 1964 hit song “House of the Rising Sun”. Now you might think that this band cannot pull it off doing another cover track but you have to remember that when this band does a cover they take the song and make it their own. They do so by simply putting a piece of themselves into it and on this rendition they decide to change “the house” in the track to one of the most famous cities in America “Las Vegas”.

Whether one is a fan of Five Finger Death Punch or not they cannot help but be a fan of this record.  Fans will be impressed that the band composed enough quality tracks to release two consecutive albums so close to one another. Each song is creative, unique, and far different in its own way from anything that they have ever done before. There are certainly definitive highlights on this album as well as on their previous record. But nothing can certainly take away the power and emotions that this record brings out in the listener. They took some risks in putting out the record, but their “Knuckleheads” worldwide called out too them and not only did the band answer but they also delivered with an album that will surely appease their fans. Those who loved The Wrong Side of Heaven and the Righteous Side of Hell Vol 1  will surely fall in love with its conclusion. CrypticRock gives this album 5 out of 5 stars! 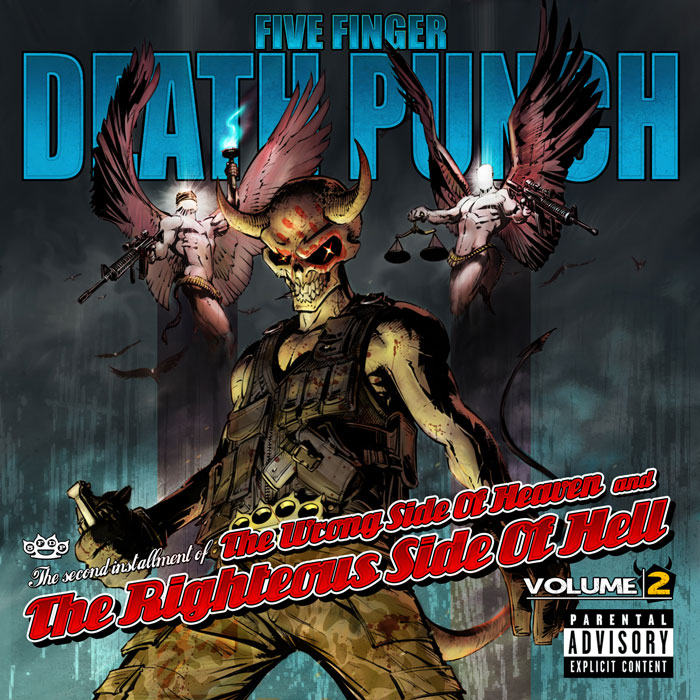