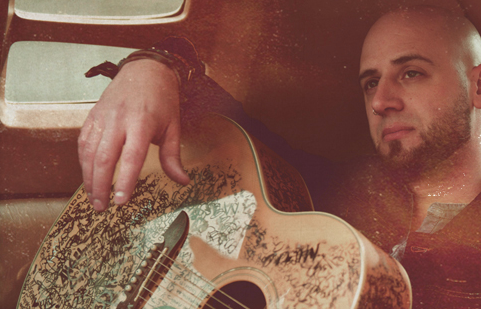 FLINTFACE is an alternative/progressive rock solo artist from Philadelphia, PA.  His debut album Hope was released on July 22nd 2014 and features production by Ross Hogarth, who had previously worked with such greats as John Mellencamp, Van Halen and John Fogerty. FLINTFACE himself works the guitar and lead vocals, while other recording talents on the album include Rami Jaffee (The Wallflowers, Foo Fighters), Matt Rollings (Lyle Lovett) and Lauren Gold (The Who) on keyboards; Tim Pierce (Jason Mraz, Bruce Springsteen) on guitar; Randy Cooke (Eurythmics, Kelly Clarkson), Kenny Aranoff (Smashing Pumpkins, John Mellencamp) and Matt Chamberlain (Edie Brickell & the New Bohemians) on drums; Chris Chaney (Jane’s Addiction) on bass; Cameron Stone (The Who) on cello; and Jessy Green (Foo Fighters, Pink) on strings.

Interestingly enough FLINTFACE was born Joe Scorsone in West Philadelphia, PA the son of a minister. As a child, he was very involved in giving back to the community. Sadly, he was also abused and bullied, acts that started him on a downward spiral of depression and insecurity. In a twist of fate, he found comfort and security in music.

“It’s about finding hope when hope is very hard to find. There’s always that tiny glimmer in the darkness. I just want to be a guy who tries to speak the truth and hopefully helps to empower others,” explains Scorsone.  Even the obscure name he chose for himself has a powerful meaning. ‘FLINTFACE’ comes from a Bible quote from the book of Isaiah 50:7 – “I will not be disgraced. Therefore I have set my face like flint, and I know I will not be put to shame.”

The songs on Hope certainly are inspirational, without being preachy or over-the-top corny. The leading song on the album, “On Your Feet Again”, has a slow, marching beat, with a strong lyrical focus on the downtrodden military grunt. “Army of Rejects” has a peppier melody, interspersed with some great guitar picking, and lyrics that make you want to stand up and shake a triumphant fist in the air. Carrying a smooth country sound, “When Culture Calls” is like a cool drink of water, a gently swaying riverboat ride of relaxation. “Rock Steady” picks it back up, heavier on the bass than the previous songs, but with a toe-tapping beat that had us nodding along from beginning to end. Sweet and spiritual, “Ready For It” lifts you up with a lyrical, chanting chorus that you can feel building as the song rolls along. “Buying What You’re Selling” starts off with in your face lyrics, a no-nonsense song that gives your self-esteem a boost, sprinkled with those great guitar riffs. The inspiring “Found My Voice” digs in deep and reminds the listener what FLINTFACE is fighting for, a strong identity and a steely backbone. A tribute to overcoming abuse, “Did I Stutter” is a fight back anthem for children who have suffered at the hands of adults. The close-out song, “Hope (The Bottom)” is the perfect cool down for this album – a slow-paced, relaxing melody that would sound right at home being strummed on the guitar next to a crackling campfire.

FLINTFACE has a passionate, distinct sound, pouring himself into the lyrics with the intensity of a man on fire. While considered alternative rock, FLINTFACE would be right at home on country or even pop stations. He does not box himself in to a specific genre because the music means more to him than the place it sits on the charts. With the wide range of musical talent he used on Hope one can see that sound and quality rise above any labels others might try to stick him with. While some might call this generalizing, we call it finding the perfect piece to the puzzle and sighing happily as the picture comes together.  “I don’t want to preach. I just want to be a guy who tries to speak the truth and hopefully helps to empower others,” said Joe “FLINTFACE” Scorsone. It certainly seems as if you are on your way, Joe.  CrypticRock gives Hope 3.5 out of 5 stars. 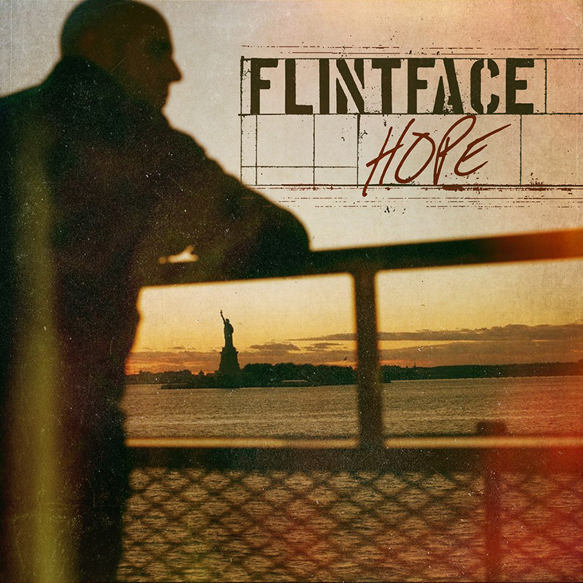 FLINTFACE is readying himself for ‘The Hope Tour’, in support of the album. His touring band includes Darrell Jones on lead guitar and backing vocals, Billy Sims on bass, Chris DeMas on drums, Anthony Scorsone on rhythm guitar and Beth Scorsone on harmonies. Not only is he playing tour venues, FLINTFACE has also teamed up with Dispatch School Marketing, a group whose goal is to raise awareness for bullying prevention.  In support of National Bullying Prevention Month in October, FLINTFACE will be playing free shows at select Middle and High Schools throughout the country. He has also launched a contest encouraging students at over 4,000 schools across the US to create original works of art that incorporate his music’s message of hope and individuality. The winner of this contest will receive prizes from Sony Electronics, and the winning school also getting a private concert from the artist.