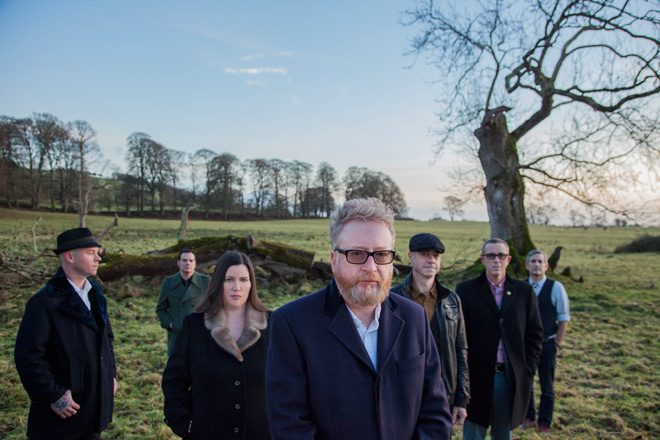 It has been six years since the sensational septet Flogging Molly released a new studio album, though now the wait is over and Life Is Good! This Friday, June 2nd, they return to jigging eardrums via Vanguard Records.

Flogging Molly hail from Los Angeles where they got their start in the early 1990s. Dublin-born Vocalist/Guitarist Dave King rounded up a collection of superb musicians – Bridget Regan (Violin, Tin Whistle), Dennis Casey (Acoustic Guitar, Electric Guitar), Bob Schmidt (Banjo, Mandolin), Matt Hensley (Accordion, Piano, Concertina), Nathen Maxwell (Bass Guitar), and Mike Alonso (Drums, Percussion) – to create the Celtic Punk seven-piece, who released their debut disc, Swagger, in 2000. Seventeen years have given the band four additional albums – from 2002’s Drunken Lullabies to 2011’s Speed of Darkness; the live collection Alive Behind the Green Door; an acoustic/live DVD/CD entitled Whiskey on a Sunday; performances on the Vans Warped Tour and the American Fléadh Festival; and a contribution to the Rock Against Bush project. Accolades and dedicated, passionate fans have led Flogging Molly to sell in excess of an estimated million records as of 2006.

While Flogging Molly are really and truly closer to Celtic Folk than Celtic Punk, this fact has never stopped the band from being deeply beloved throughout the Celtic Punk scene. With a six-year span since their last release, the band have finally returned to the studio to present their sixth full-length collection, Life Is Good. Produced by Grammy Award-winning Joe Chiccarelli (U2, Beck), co-produced by Ross Hogarth, and recorded in the heart of Dublin, Ireland, Life Is Good is an anthology of twelve diverse tales of life’s many haggard roads.

Life Is Good begins with “There’s Nothing Left Part 1,” some beautifully-orchestrated acoustic storytelling complete with fiddle and acoustics. It propels the band into the tale of the heavyweight champion of gloved boxing, “The Hand of John L. Sullivan,” a fast-paced, massive sound that is a jig-worthy, stomping good time of pure, infectious happiness and guaranteed to be a crowd favorite when added to the band’s live set! “Reptiles (We Woke Up)” perfectly highlights King’s vocals, as he weaves a political wake-up call to those who simply stood by and allowed reptiles to slither into control. Complete with anthemic choruses, the track tends with the emphatic proclamation: “We woke up!” It is complemented flawlessly by the slower pace of “Welcome To Adamstown” – the tale of a failed, planned community in Ireland – and “The Day’s We’ve Yet To Meet,” which both serve to highlight the band’s stellar musicianship, while paying homage to the toe-tapping beat of a nostalgia. Gloomy as it might be!

Ironic album namesake “Life Is Good” depicts a world of beggars and choosers who suffer despite the bounty promised in life. “Life is good / Life is kind / Life is everything we loathe / It’s so unkind,” sing King and co. on this anthem for the downtrodden. Like a beautiful old-school tattoo, the ballad “The Last Serenade” pays tribute to those classic, tragic individuals who suffer out in those salty seas – be they literal or merely poisonous blue collars. They sign off to the lines: “Goodbye to you dreamers, vagabonds and true believers, long may you sing once again!”

“The Guns of Jericho” dials down to a slow, acoustic pace, segueing the band into something truly gritty – and the album’s heaviest track – the political march of “Crushed (Hostile Nations).” Of course, the crushed and beaten require an anthem, and Flogging Molly provide with the aptly-titled “Hope,” inspiration in the form of banjo, fiddle, and gang vocals galore; a beautiful song that promises that hope is merely a shout away. As the group draw to a close, “The Bride Work Black” paints a macabre visual that is overshadowed by the apropos closing number, “Until We Meet Again,” full of regrets, woes and reminders of how truly “great” life can be. It might sound a bit dark, though in life, we learn to take the good with the bad and keep on dancing!

Flogging Molly feel timeless though they sing of the issues pressing on our collective conscience today: from politics and the economy to unemployment and immigration. With a keen eye for social commentary but always a beautiful orchestration that forces toes to tap, they are a band who continually drop anchor in the melodic Celtic Folk pool. Wonderfully upbeat despite some heavy realities, Flogging Molly paint a broad picture with the enchanting Life Is Good. For these reasons, CrypticRock give Flogging Molly’s Life Is Good 4 of 5 stars. 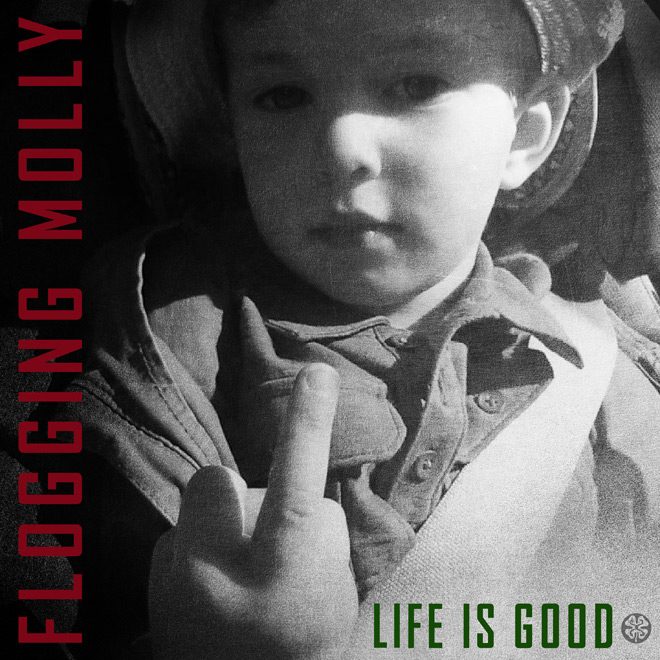 Flogging Molly are currently on-the-road in support of Life Is Good.  Visit FloggingMolly.com for further details and tour dates.