On March 15, 1956, Metro-Goldwyn-Mayer produced and distributed what would become a seminal Science Fiction film classic. Directed by Fred M. Wilcox, Forbidden Planet, or Fatal Planet as it was known in its first script, would influence visual Science Fiction for decades, and sixty years later is worthy of further reflection. 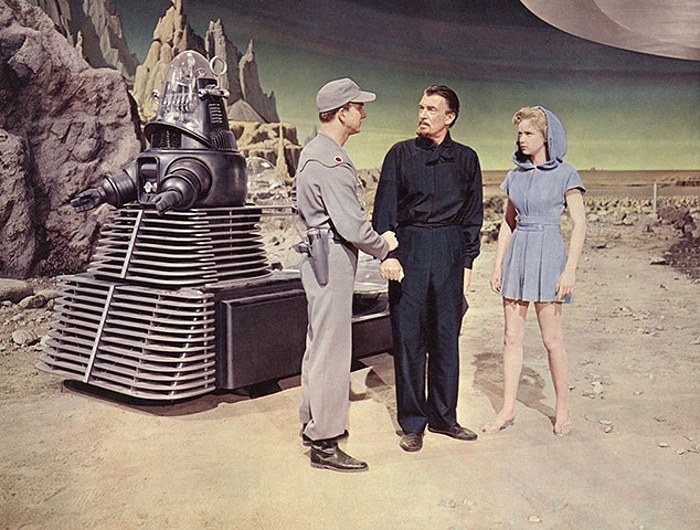 In the 2200’s, humanity, who had explored only their solar system, develops a faster-than-light hyperdrive that allows them to explore the universe. Forbidden Planet follows the crew of a spaceship sent to follow up on a mission sent to planet Altair IV 20 years prior. Sole survivors of the first mission, Morbius (Walter Pidgeon: How Green Was My Valley 1941, Funny Girl 1968) and his daughter Altaira (Anne Francis: Bad Day at Black Rock 1955, Funny Girl 1968) live in isolation with technological wonders the rest of mankind have never seen. Commander John Adams (Leslie Nielsen: The Naked Gun series, Airplane! 1980) and his shipmates express awe over the technology, including renaissance robot, Robby. They also fawn over beautiful Altaira, who has never seen another human beyond her father and is naive to the ways of young men.

Danger lurks on the planet in the form of an invisible intruder that first sabotages the C-57D, then proceeds to kill members of the crew. Upon further investigation of the first expedition, Commander Adams and his crew discover that Morbius garnered all of his technology by studying the Krell, an alien civilization 200,000 years extinct. One of their devices permanently doubled Morbius’ intellect, near-death being the cost. Powered by 9,200 thermonuclear reactors, the Great Machine left behind by the Krell is able to materialize anything the operator imagines.

The climax arrives when Morbius becomes increasingly agitated over the new expedition and the love affair between Commander Adams and Altaira. Though first denied by Morbius, the invisible intruder is revealed to be his own, monstrous id – the same thing that killed the original expedition and caused the Krell to destroy themselves. He can not control his psychic monster and it kills him. Before he passes away, he sets the Great Machine to begin an irreversible chain reaction that will destroy the planet. He warns Commander Adams that everyone needs to be at least 100 million miles from the explosion to survive it. Deep in space, the remaining crew, Altaira, and Robby watch as Altair IV is destroyed.

Many of the actors from Forbidden Planet had long, illustrious careers. Leslie Nielsen, who played Commander Adams, skyrocketed to fame after his role here and in the subsequent film, 1972’s The Poseidon Adventure. Of course, his later career was marked by his anti-typecast comedic breakout in the 1980 film Airplane! and The Naked Gun film series. His comedic mastery borrowed much from his previous, serious roles that allowed deadpan delivery within an absurd set of circumstances. “I am serious—and don’t call me Shirley.” 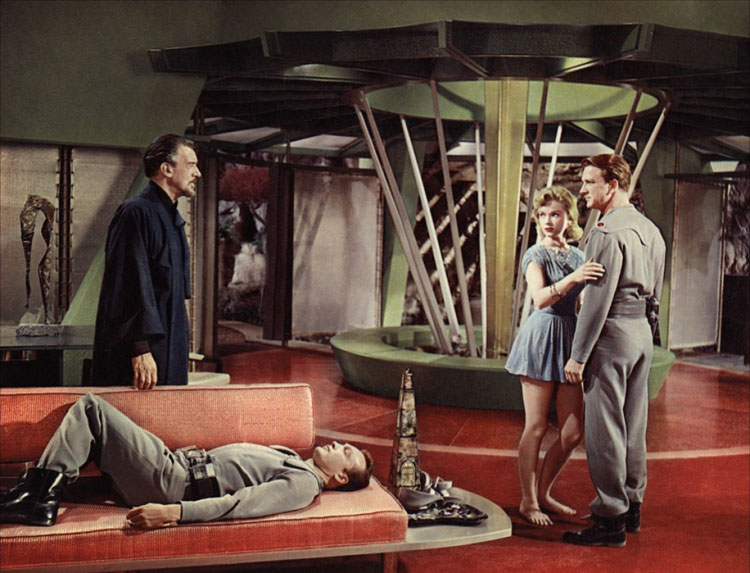 Other actors also went on to have starring roles in television and film. Jack Kelly, who played Lt. Jerry Farman, was co-lead on popular Western Maverick, a kind of brothers-action-adventure that would be comparable to today’s Supernatural. James Drury, as side character Strong, later landed the lead role of the ranch foreman on The Virginian, television’s first ninety minute Western that ran for nine seasons. The character Robby the Robot cost approximately $125,000 to make in 1956. He and the 170 foot mock-up of spaceship C-57D were used in a large variety of subsequent films and shows. Robby appeared in The Invisible Boy, The Twilight Zone, Lost in Space, and even Mork and Mindy. In Lost in Space, he even battles also-famous “Danger Will Robinson” robot, Robot; a true battle for the ages. In Forbidden Planet, uncredited stuntman Frankie Darro was the ‘soul’ inside of Robby. He had previously voiced Lampwick, the boy turned into a donkey in Disney’s 1940 classic Pinocchio. Robby’s restored body is in the collection of Director William Malone, known for creating the legendary mask for Horror icon Michael Myers.

MGM borrowed veteran Disney Animator Joshua Meador for all of its animated sequences, including the attacks of the invisible monster. Along with the masterful animation, Forbidden Planet was the first film to feature an entirely electronic score. Dore Schary, MGM producer, happened to stumble across Composers Bebe and Louis Barron in a beatnik nightclub in Greenwich Village. Barron constructed his own electronic circuits to generate the film’s myriad sounds.

Other firsts from Forbidden Planet include it was the first to feature a faster-than-light concept for space travel, it was the first set entirely on a planet far from Earth, and it featured the first mini-skirt on feature-length film.

For all that it has since influenced popular culture, Forbidden Planet itself was inspired by Shakespeare’s 1611 play The Tempest. A sorcerer, denied his rightful title, lures his brother and king to an island in a plot to restore his daughter to her rightful place. He uses his power to conjure a storm, revealing the evil of his brother and affecting the marriage of his daughter to the king. Morbius is the technological sorcerer here, on an island of a planet, who, in his quest for power, conjures his monstrous id to protect his daughter from the troubles of the outside universe. His hubris, however, led to the downfall of the first expedition and troubles with the second.

There are also ties to Greek mythology, with the initial expedition flying spaceship Bellerophon. In the myths, Bellerophon was a precursor to Heracles, and won fame by slaying the Chimera with the help of the Pegasus. The monstrous id of Morbius was akin to the Chimera, made of several different animal characteristics. And, like Morbius, Bellerophon’s hubris led to his eventual destruction. It could be assumed then, that the space expeditions in Forbidden Planet are seen as the ascendance of humans to demi-gods through advancement of and hybridization with technology, but only if we can mature enough to use is without ego. 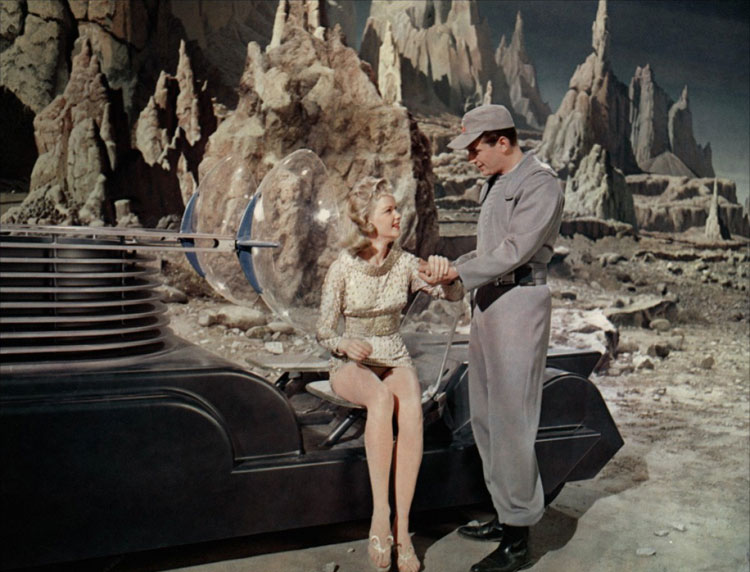 Furthermore, Forbidden Planet came out during the golden years of Science Fiction literature and media. The public, with their economy booming from the 1940s war effort, found their imagination fired by scientific and technological progress, rampant consumerism, and the mystery of the frontier of space. No longer plagued by the albatrosses of the Great Depression and World War, society looked for new pastimes and opportunity. It was also the beginning of the rise of Communism and society’s significant fear of the ‘other’. Authors and filmmakers seized on these trends, including the Roswell U.F.O. crash of 1947, and inundated the culture with it.

Ever since Forbidden Planet, Science Fiction has been a major vehicle for futurists and social commentators. It explores the nature between the organic and inorganic, the political fringes, and what it means to be a human, here and now. In the film, Altaira is both taken advantage of and fiercely protected – men falling all over themselves to kiss her and alternately ‘protect’ her from the others by allowing only one person to possess her. At one point, she is accused of dressing too provocatively for the men to handle. All these themes are hyper-present today, with victim shaming, right to consent, and women’s rights shamefully slow to advance.

Overall, Forbidden Planet remains a relevant, complex story for our culture. The plot is based on a timeless masterpiece and resonates on multiple levels. The special effects are, despite being aged, often fantastic, as Robby the Robot and his place in Pop culture testify. All of the actors deliver believable roles that rarely detract from the experience. Despite the ridiculous ‘kissing’ romance tangent, the film takes itself seriously and invites today’s viewers to explore the depths of philosophy and human nature we have been probing for centuries. Forbidden Planet did not just survive sixty years, it thrived in them, and should be perpetually celebrated. 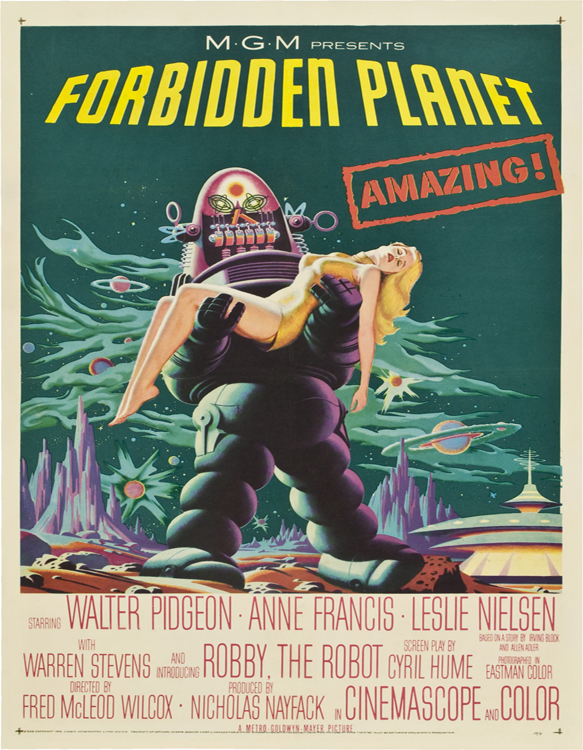