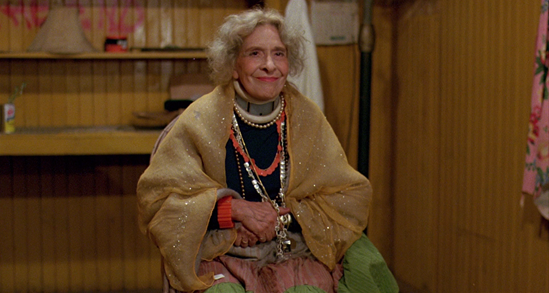 The film opens on a self-help seminar that is ending, called E.G.O. (Ernie’s Growth Opportunity), presented by Ernie (stand-up Comedian Bobby Collins: Anne of Green Gables 1985, Anne of Avonlea 1987). As the crowd disperses, an old lady (Ross) is talking with two hippies, Terry (Marsella Davidson) and Charlie (uncredited), about what they learned about loving one another and such, and ask the old woman for a ride, which she gladly provides.

The car drives further away from civilization, and while Terry talks with the woman, Charlie is getting a rope ready, presumably to strangle the poor Old Woman. Suddenly, the car stalls in the woods, and while the Old Woman gets out to check under the hood, Charlie has Terry turn on the radio. As he puts on his sunglasses and relaxes, Ike (Coffin) appears and decapitates Charlie with a machete through the car window. Terry screams and gets out of the car, only to be attacked by Addley (McCleery) as Mother watches and smiles. After Mother calls off Ike and Addley, Terry crawls over to her and begs for her life, but Mother only repeats the mantra from E.G.O., “Thank you for sharing. I love you,” kisses her, and strangles her with a cord. Then she turns to her boys and proclaims that they made her proud. The screen washes out to yellow, then fades to black for the title card. Next, the three main characters are watching a slideshow of them in college and reminiscing about good times and how they will be friends forever. 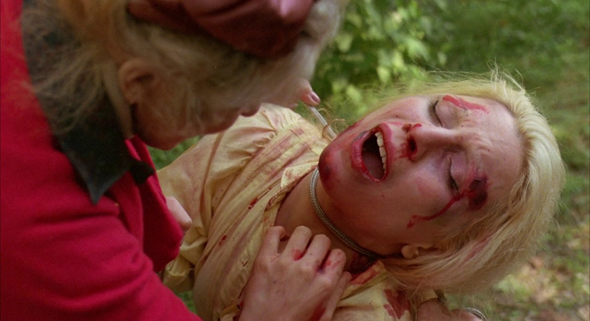 Cut to present day Los Angeles, at a lavish pool party being thrown by Trina (Pierce). There’s a ton of people including Trina’s butler serving lines of coke on a silver platter, a guy talking about gross points and distribution (Stanley Kaufman, Lloyd and Charles’ father), and a girl on roller skates taking us from person to person as she skates by. The Butler brings Trina a telegram talking about a secret vacation with the Rat Pack. Meanwhile, in Chicago, Abbey (Hendrickson) heads home to her small apartment and checks her mail with her mother yelling from the other room, calling her a whore and saying that she doesn’t care about her own mother, and repeatedly reminds her that she is a sick woman. Abbey is immediately brought out of her funk when she reads the telegram. Then in New York, Jackie (Luce) is getting ready to go when her boyfriend sneaks up on her, sneaks a fifty dollar bill from her purse and does a bump of cocaine. His plan is to laze around her apartment all weekend. Before she leaves, she says, “I love you,” to which he replies, “Take care.”

At a “bus station,” that consists of one bench and a sign that says Drexburg Bus Terminal in the middle of what appears to be a junkyard, Abbey and Trina are picked up by Jackie. Along the way, they stop at a small general store, where Jackie asks for directions to Deep Barrens and receives and ominous warning from the Shopkeeper (Scott Lucas).

They arrive at Deep Barrens and are hiking to their destination, laughing and drinking beer. Trina steps in a big pile of bear shit and everyone has a good laugh. After each beer they drink, they set their can down to mark their trail. They pass a bush that shakes as though someone or something is hiding in there. Jackie, Abbey, and Trina get to a nice spot on the lake and that night, they smoke some pot and roast marshmallows and talk about Jackie’s love life, which is not great. It seems she has a history of bad decisions.

In the morning, Jackie catches a trout and while she and Abbey are freaking out about it flopping around, Trina grabs it and cooks it for dinner that night. Around the camp fire, Abbey thanks Jackie and Trina for being her friends, and all of a sudden they are attacked by Ike and Addley, wrapped up in their sleeping bags and dragged off to a boarded up house in the middle of the woods. 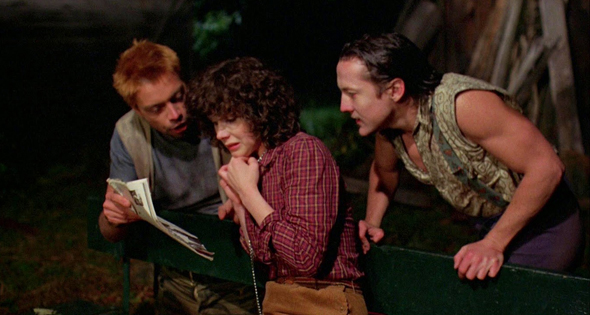 Ike and Addley drop the sleeping bags in front of Mother and smile for her approval. They tie the girls up to various exercise equipment and Mother decides that Jackie is going to be “first.” The boys escort their Mother and Jackie downstairs. Outside, Mother sits in a chair while the boys decide what they want to do. They set up a scenario called, “The Park Bench,” in which Jackie is sitting on a bench supposedly reading while Ike poses as a maintenance man and Addley as a Frenchman walking his dog. Suddenly they attack her, and after a minute, Mother blows a whistle and gives criticism about how one of Jackie’s hands were loose. As it turns out, she trains her sons hard to be perfect killers. The next scenario is “The Shirley Temple,” where they dress Jackie in a little girl dress and give her a doll and tell her to walk like a little girl. Addley hides behind the park bench and pounces on Jackie, beating her and raping her as Trina watches out of the upstairs window. Ike knocks Addley out of the way and takes his turn. Afterwards, it is time for bed, and the boys carry Jackie upstairs.

The next day, Mother is putting the boys through vigorous training exercises to be the best killers they can be and make her proud. After all the punching straw bags, running through tires and hacking up fruit with faces drawn on them, the boys take a rest. Meanwhile, upstairs, Trina gets into a sleeping bag and has Abbey lower her down, but as she does, Addley stops right under the bag. The rope Abbey is holding cuts right into her hands. Soon, Addley runs off and Abbey drops Trina to the ground. She gets out of the bag, runs upstairs and unlocks the door, letting Abbey out so they can search for Jackie. They run into the Boys’ room and discover the body of a woman hanging on the inside of the closet door, and the head of the hippie from the opening sequence. Suddenly, a hand creeps out of the dresser, grabbing Trina’s hand. She opens the drawer to find Jackie, barely alive. Abbey and Trina grab Jackie and flee the house, but are caught by Ike and Addley, and as soon as they are about to finish off the girls, Mother screams for her life from outside, causing the boys to run out there and letting the girls escape into the woods. Mother says she was attacked by Queenie, her older deranged sister who supposedly lives in the woods.

Abbey and Trina find a safe place and cover Jackie up with leaves. Trina elects to run for help and Abbey stays with Jackie. Trina eventually finds the trail of beer cans and follows it to the car only to find it not running. As day turns to night, Trina is walking down the road they drove in on and is approached by a police car. The Officer gets out and she hugs him, only to realize it is Ike. She kicks him and runs off. After a bit, when he is near, she throws a rock into some bushes. Ike dives through and falls down a large hill, letting Trina escape. By the time she is back to the camp, Jackie is dead. The next morning, Abbey and Trina arm themselves with whatever is left at the camp, and grab Jackie’s body. They arrive at the house and prop Jackie against a tree so she can watch the brutal revenge that is about to unfold.

Mother’s Day was written according to the amount of money that could conceivably be raised, which was around $150,000, and was shot in Connecticut, New York, and the bulk in Stillwater, NJ. The film was mostly shot outside due to the budgetary constraints, and the extras in the opening scene and the pool party were all family and/or crew members. Another budget corner that was cut was that the headshot of Bobby Collins was used for the poster for E.G.O. because, they couldn’t afford to get a new photo taken. The house itself was abandoned for years, and when they went in to check it out, they found the owner dead for who knows how long. 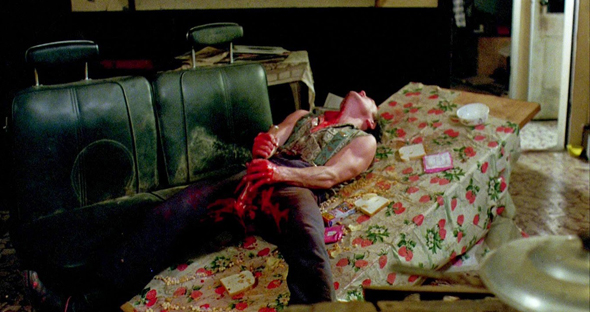 Charles Kaufman was heavily influenced by the success of John Carpenter’s Halloween in 1978, and wanted to capitalize on that, as there had been no other successful independent Horror films since then. The first-person-breathing shots of the girls in the woods were a direct homage to Halloween and the scene at the general store was a direct homage to the film Deliverance.

Troma is known worldwide for its over-the-top, tongue-in-cheek, cheap exploitation, and not for the “great” acting done in their films, but despite this, Mother’s Day exhibits really decent acting. Rose Ross was a seasoned veteran of stage and television and classically trained in the works of Shakespeare. While that was certainly not a prerequisite for Mother’s Day, she did not treat the role like it was beneath her, and turned in a great performance. Ike and Addley worked great portraying psychotic brothers that were merely children in men’s bodies, although the character of Ike was definitely more of a standout as his deep voice and simple speech pattern seemed too real to be acting. The women portrayed three different kinds of woman: Jackie is the silly, fun, trusting one that always chose the wrong men, Abbey is the quiet, kind of nerdy one, who seems to have no fun unless it is on these mystery weekends, and Trina is the rich one, but not so rich that she will not gut and cook a fish when the time is right.

Although Mother’s Day is turning thirty-five, it remains one of the most unique films of the slasher genre in that it gives equal screen time to the killers and the victims, and goes so far as to develop the killer’s relationship with their Mother. It is also unique in that it shows the killers learning and improving their killing skills and viewers do not see that in other films. Granted, it is a little silly, but that is Troma. What was it Kubrick said? Ah yes, RAT-PACK-FOREVER! 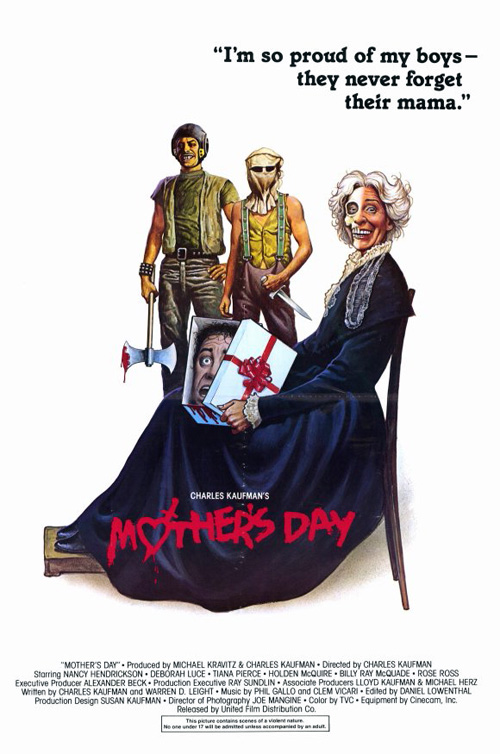